Want to know more about Italian desserts? Italy is responsible for much of the world’s finest art, culture, and cuisine. But the Mediterranean country serves up more than just Italian food and fine wines.

Italy is also the country that has given rise to some of the most delectable desserts. Here are 12 traditional desserts from Italy that you simply must try.

This rich cake is made of coffee, dark chocolate, peanuts, and almonds. The original name for it was “black cake”.  The recipe was developed at the end of the 19th century by pastry chef Eugenio Gollini.  In 1907, the cake was renamed Jacopo Barozzi, a famous local architect.

Eugenio worked in his uncle’s bakery, Gollini Bakery, in the small village of Vignola. The Torta Barozzi became so popular with locals and visitors that they trademarked the name.

The recipe is a closely guarded secret and the cake itself is a bit of a local legend. Gollini Bakery is still open today and the only place to taste the original Torta Barozzi. 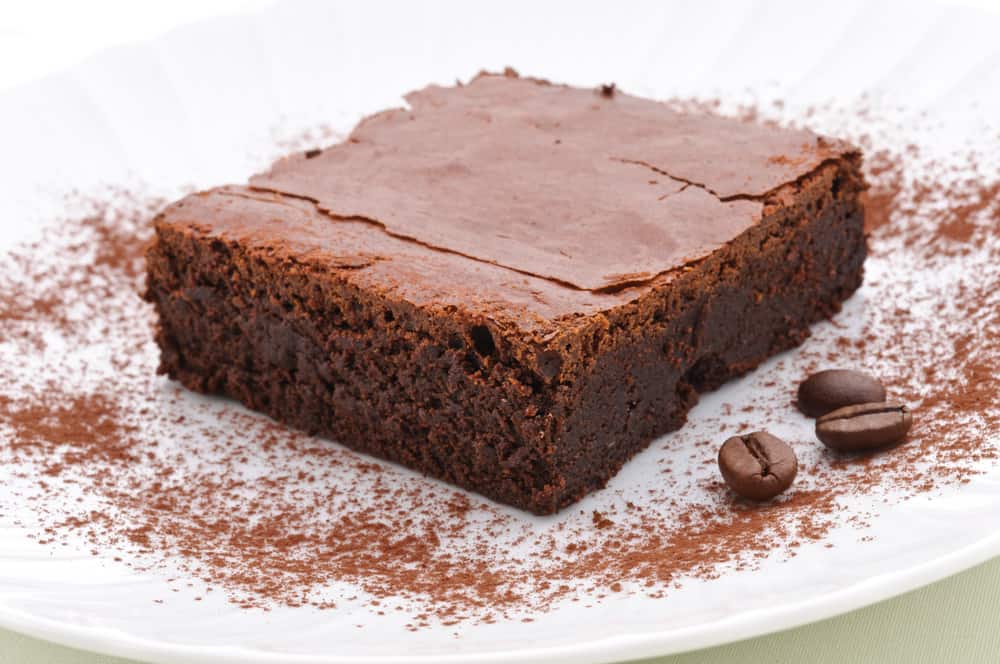 This layered delight is one of Italy’s most traditional desserts. It begins with layers of savoiardi, or pound cake, which are dipped in Alchermes, a reddish herbal liqueur.

You can find many versions of this dessert throughout the central part of the country. No one knows why this Italian dessert is named after England.

Many folks believe it was created, and named, after the Duke of Este, who ruled the region once. It’s said that he was in the mood for an English trifle and the Zuppa Inglese was born. 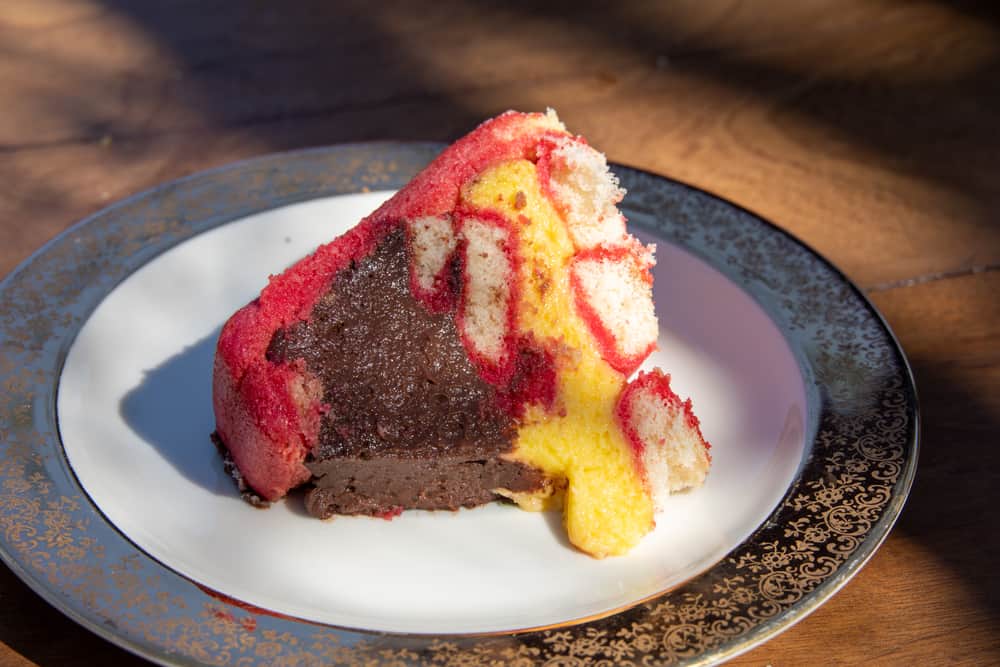 This crispy little treat comes from Naples, the birthplace of the pizza. Sfogliatelle is created from many layers of thin puff pastry then filled with a creamy, sweet filling of ricotta cheese, sugar, semolina, eggs, and candied citrus. A more modern version of this dessert features a softer crust with a lobster-tail shape.

Sfogliatelle is an adaptation of a much older recipe. A nun from the eponymous monastery near Salerno was wanting to find a new way to use leftover semolina. She created a similar crispy dessert that was called Santarosa. 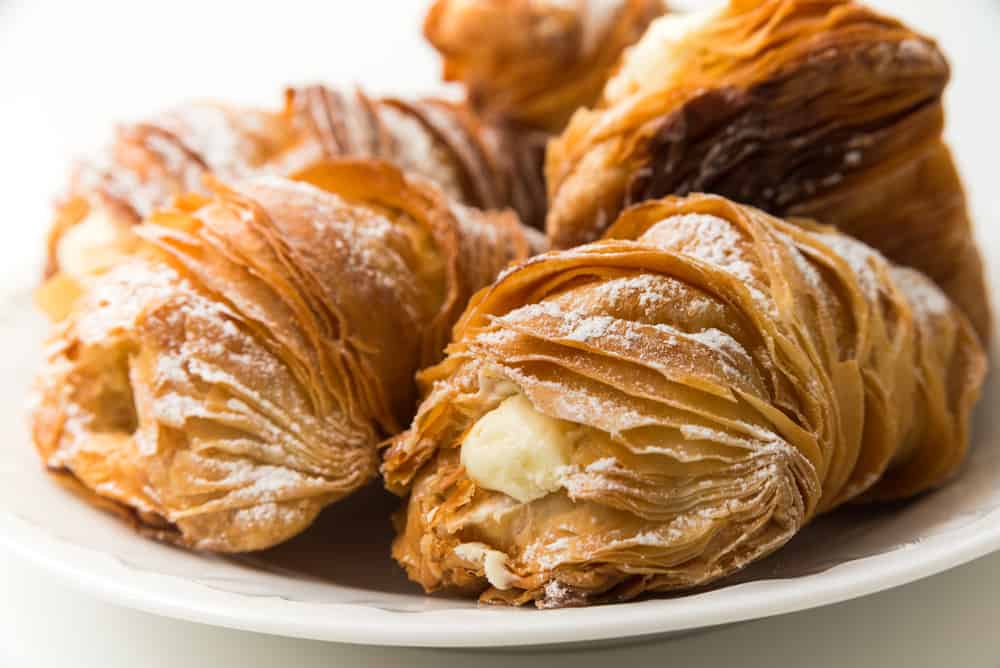 Budino di riso hails from Tuscany and is generally eaten for breakfast or given to children for an afternoon snack. The confection starts with a shortcrust pastry shell, shaped like a boat.

Then it’s filled with creamy rice pudding that has been flavored with either anise, vanilla or lemon. The combination tart and custard is then baked to a light golden brown. The more modern version of this traditional dessert resembles a soft cupcake that is sprinkled with powdered sugar.

A similar dessert, “budinone”, was served many years ago in the countryside of Sienna. Budinone was served on special occasions, like birthdays. Budinone was a baked dessert consisting of rice, milk, eggs, and sugar that was infused with vanilla. Budino di riso can be found in most pastry shops and bakeries all year round.

Don’t let the humble looks of this dessert fool you. The pasticcioto leccese begins with an oval-shaped crust made with a fair amount of butter. The filling is a rich egg custard often topped with sour cherries. The pastries are baked until they are fairly dark on top. The best time to enjoy them is right out of the oven.

This traditional dessert was created in 1745 by a pastry chef in the Salento region. Then the crust was made from lard giving it a flaky texture. Like many other Italian desserts, the pasticciotto leccese is quite famous in Italy. 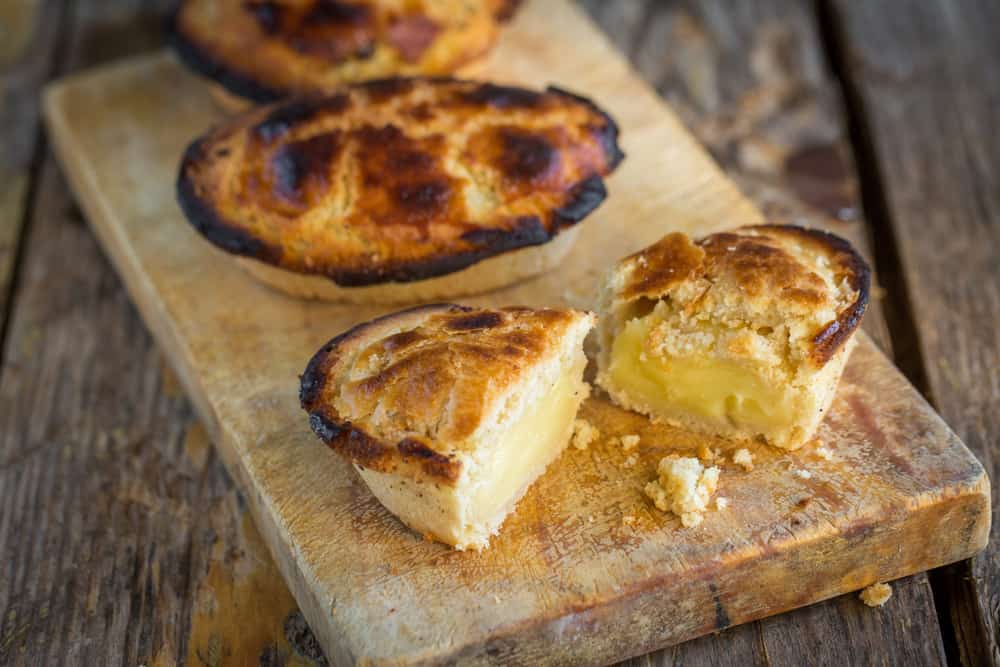 Cannoli may be one of the best-known confections to come from Italy. The name comes from the river cane that was used to shape the thin, fried dough.

The crispy tubes are then filled with ricotta cheese mixed with honey or sugar. Originally the filling also included candied citrus, but in many places today the citrus has been replaced with chocolate chips or chopped nuts.

Cannoli were baked originally for Sicily’s Carnival. But they became so popular you can find them in every corner of the country all year long. The best cannoli are filled right before eating so the outside stays nice and crispy. 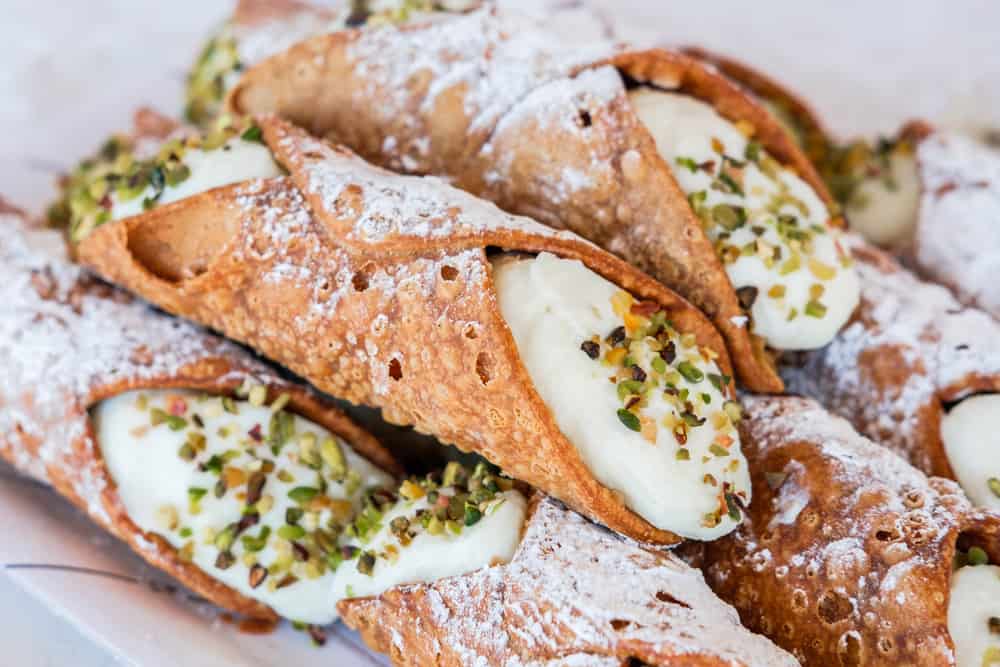 Seadas was created in Sardinia and were eaten as a main course due to how filling they are. Now, they are considered a traditional Sardinian dessert.

The dessert starts with a round, puff pastry crust, usually containing durum wheat, water, and lard. The shell is filled with fresh cheese made from ewes and is sealed and deep-fried to a golden brown. Then Seadas are covered with honey or sugar and served piping hot.

Seadas were originally served for Christmas or Easter. But as their popularity grew, they became available in most pastry shops year round. The secret to this dessert is the cheese used in the filling.

Made from sheep’s milk, the early stage of the cheese is selected while it is still soft and slightly acidic. The contrast between the cheese and sweet honey gives Seadas their unique flavor. 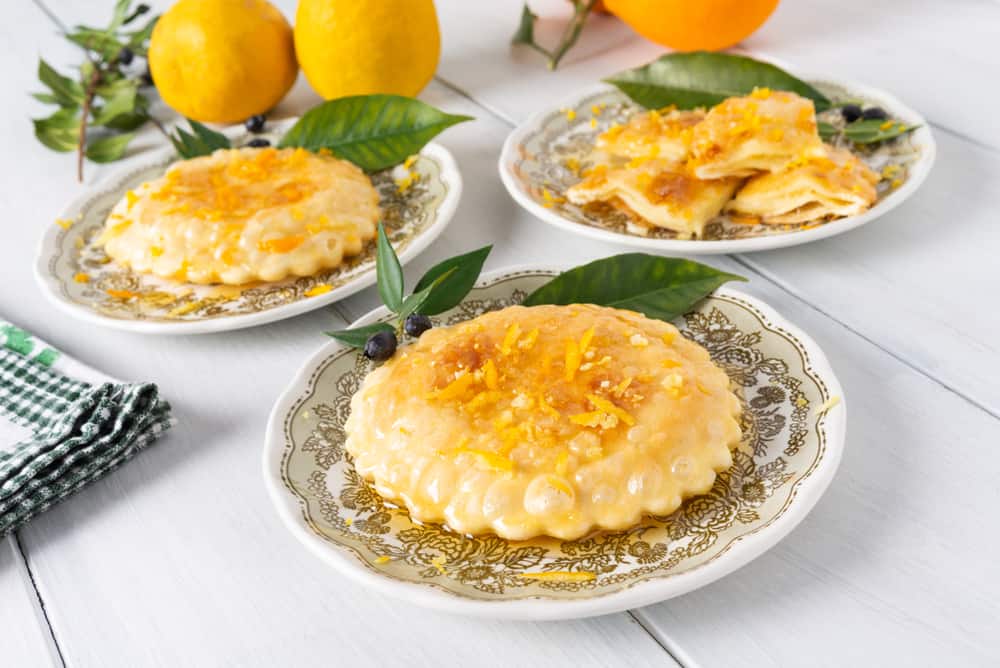 Another piece of confectionary art that was born in Naples. The babà is a mushroom-shaped sponge cake that is baked to be tall, soft and airy.

The little cakes are then soaked in rum or a sweet syrup to soften them up. These small bites of airy sweetness are considered part of the Neapolitan culture. When referring to someone you love who is kind and sweet, you would tell them “you are a babà”.

This dessert actually has Polish origins. The exiled king of Poland, Stanislaus Leszczyński, created the first version of this cake, known as babka ponczowa. He took a traditional Alsatian cake recipe and softened with alcohol. And so a new dessert was born. 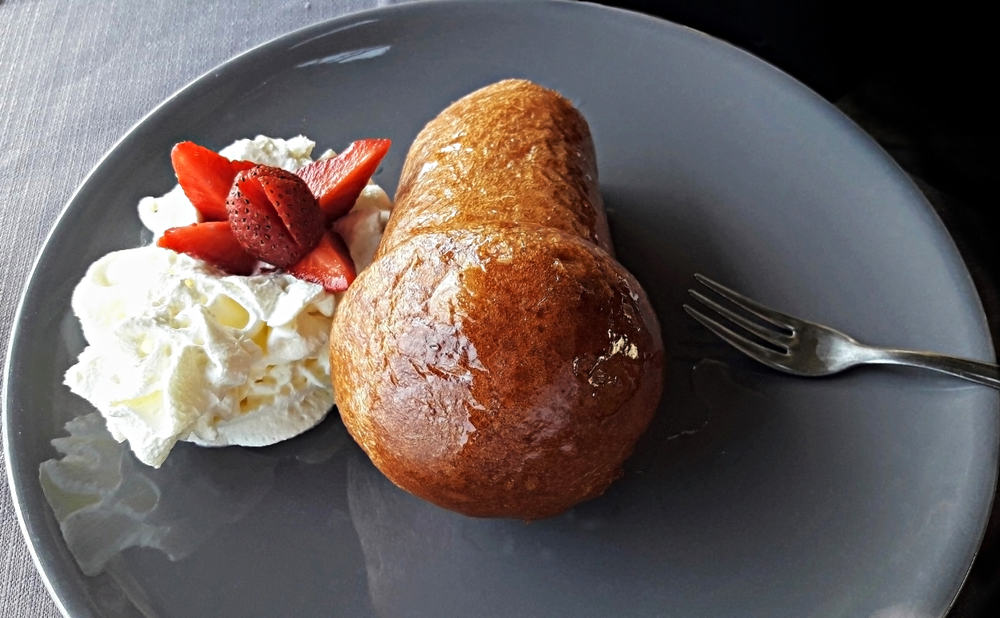 This rich cheese and cherry tart dates back to the 18th century. It begins with two layers of short crust pastry, filled with ricotta cheese and topped with sour black cherries. In many of the trattorias around Rome, some version of this tart can be found.

It was created to get around the papal ban that forbid Jewish people from selling their dairy products to Christians. So they set about to find a way to hide the cheese and the crostata ricotta e visciole was born. The contrasting taste of the sweet cheese filling and the sour cherries are sheer joy to the palate. 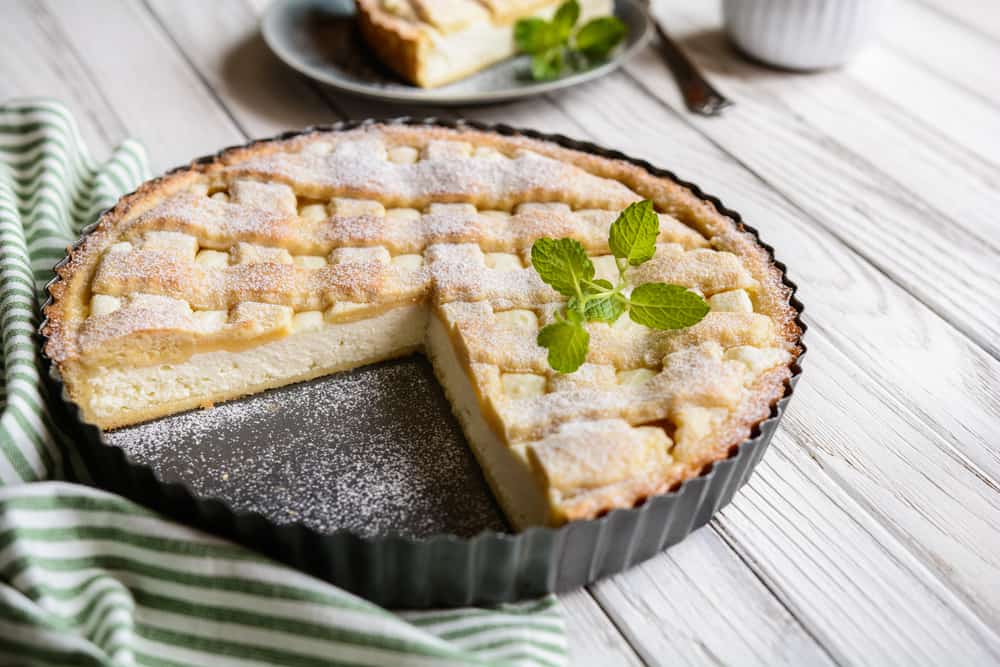 Sbrisolona literally translates to “crumble cake” and is the perfect name for this flaky little cake. The recipe originated in Mantua in the 17th century. It used to be made from ingredients common to the area, such as corn flour, lard, and hazelnuts. A more modern version starts with a mixture of white and corn flour, lots of butter and chopped almonds.

Then eggs, sugar, and lemon zest are added which gives the cake its uneven texture. The best way to eat Sbrisolona is to break off small pieces by hand. The nutty cake pairs excellently with a sweet dessert wine.

Another, more modern version of this dessert is the Torta Sbrisolona. It’s a cross between a cookie and a pastry. The torta sbrisolona uses many of the same ingredients as the cake. The biggest difference is how it is baked.

Instead of a “dough” the cookie version resembles a streusel topping that is baked like one large cookie. Then folks just break off pieces and eat it with a hot cup of coffee. 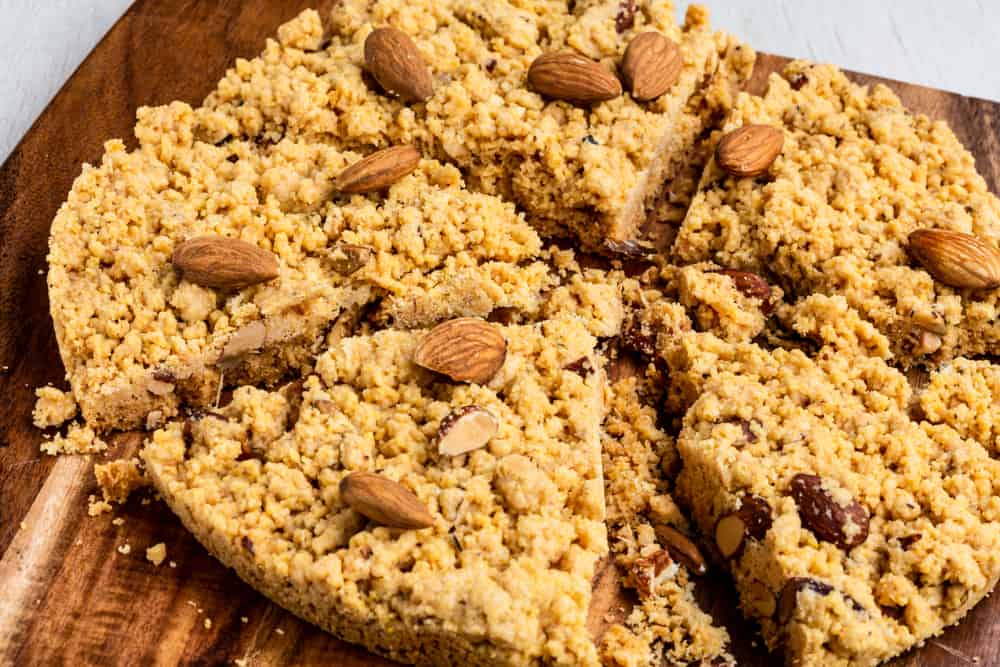 This rich, baked custard is infused with liquor, usually Cognac or rum. The original recipe included the local herbal liqueur, which was quite bitter. The complete recipe for Bônet includes the custard made from eggs, milk, sugar, cocoa powder, and liquor.

The custard is poured over crushed amaretto biscuits then baked in a mold, which gives it a unique shape.  As it bakes, the amaretti crumbs float to the top, which becomes the bottom when it is unmolded. This gives the dessert a nice bottom crust. After baking it is chilled and served cold.

Bônet is a specialty of the Piedmont region in the northwest of Italy. Lying along the French border the area produces some of Italy’s best wines and cheeses.

You can find a variety of recipes for this dessert, most are made with chocolate and hazelnuts, but some omit the chocolate and are made with espresso or just a rich vanilla custard. The one thing that remains the same is the amaretto biscuits and some form of a rich, caramel sauce. 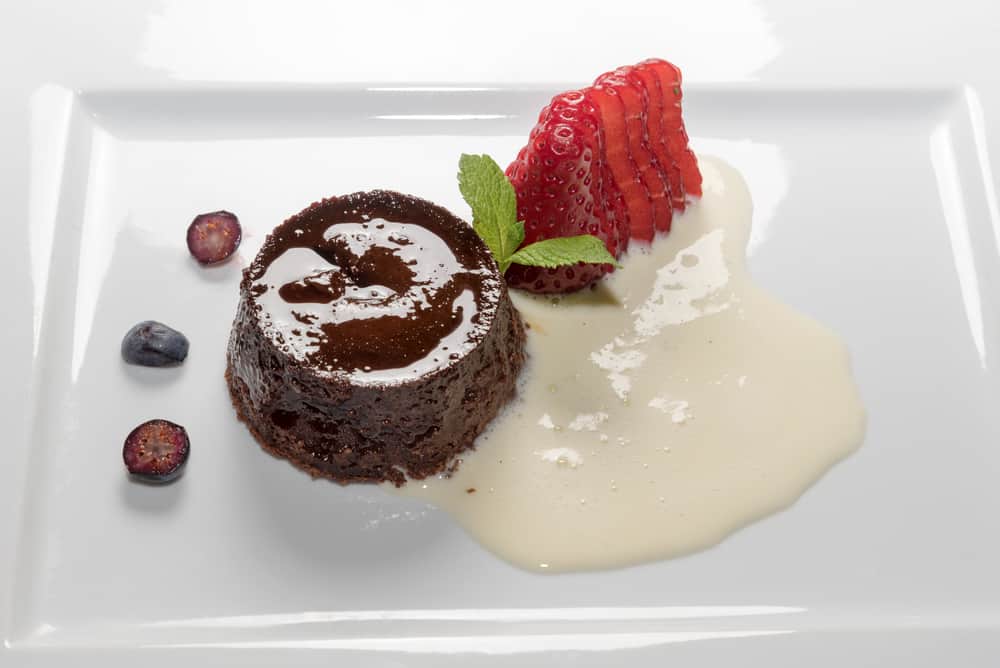 No list of Italian desserts would be complete without Tiramisù. This iconic dessert can be found on restaurant menus throughout Italy. It starts with a layer of biscuits (savoiardi) that have been soaked in coffee.

The biscuits are topped with a liqueur infused cream made from mascarpone cheese, sugar, and eggs. The creamy dessert is usually served in a dessert glass or cup.

Just where, and when, Tiramisù was created is often debated. Most people will agree the original recipe comes from northern Italy. One story says it dates back to the 1930s when it was served to clients at local brothels as a “tonic”.

Another story states that it first appeared in a mountain restaurant in Friuli back in the 1960s. And then other folks swear it was first listed on a restaurant menu in Treviso in 1971. No matter which story is correct, everyone agrees that Tiramisù is a must-try Italian treat. 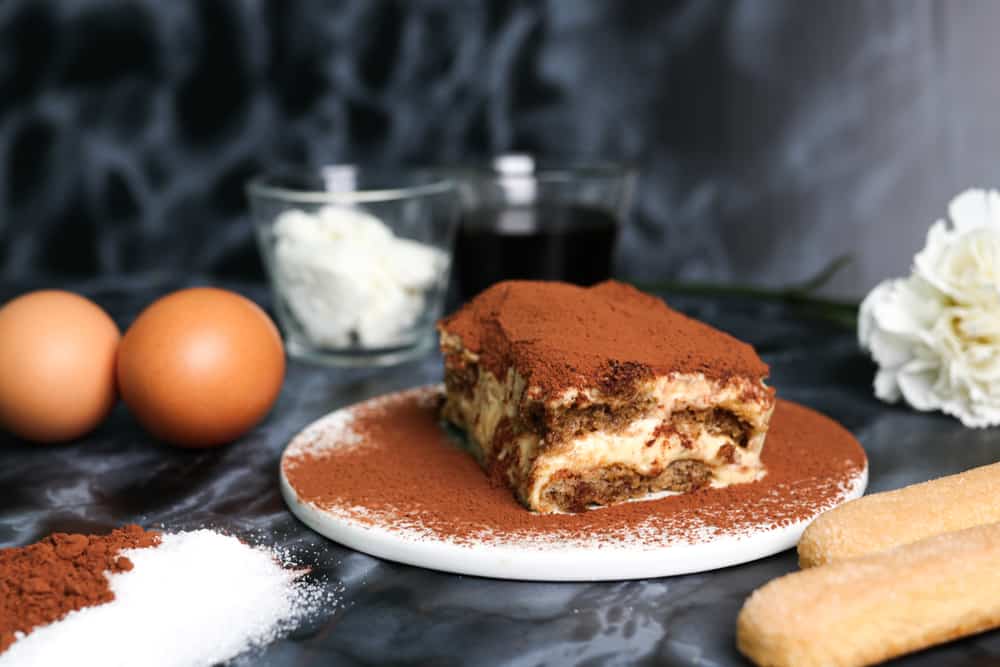 Italy is a country of fine wine and culinary delights. These are just 12 of the most traditional desserts served around the country. Almost all of the desserts on this list can easily be found in the bakeries and trattorias in most Italian cities. On your visit you must try at least one or your trip just won’t be complete.