Want to know more about Italian food? Here are 15 traditional dishes to indulge your taste buds as well as more information about Italian cuisine.

Italian food is well-known around the world for its attention to detail. The general rule of thumb is to go for quality over quantity when it comes to ingredients. Italian culinary delights from all over the country are also widely regarded as some of the healthiest foods in the world. While there is no dearth of amazing Italian dishes, here is our hand-picked selection that you should try when visiting Italy!

Pizza is probably the first thing that pops into people’s minds when they think of Italian food. The modern pizza was invented in Naples and it has spread to many other places all over the world, each with their take on the pizza offering its own unique twist.

Named after a Queen, the traditional Neapolitan pizza is called a Pizza Margherita, and consists of a flat piece of dough that is first kneaded and then tossed in the air, a real treat to see! Then toppings are added to the pizza dough such as tomato sauce, mozzarella cheese, and basil. The pizza is baked in big wood-fired ovens for 1-2 minutes and served.

Despite being the most copied pizza in the world, its worthwhile to note that the authentic and true to its roots Neapolitan Pizza is still only found in Naples because of the strict requirement of using only the freshest ingredients available locally. 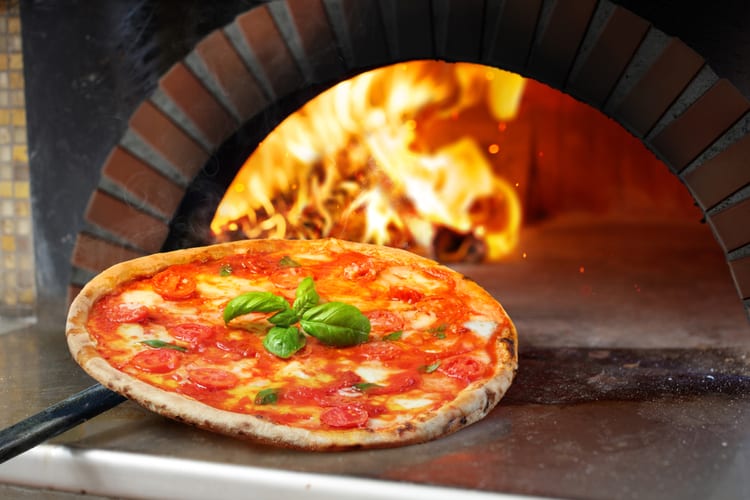 Lasagne is also a local favorite and another classic Italian dish. Made of flat sheets of pasta that are layered with cheese, vegetables, meats, and sauces, it is packed with many flavors. The pasta is added as a base and then after adding an ingredient layer, another sheet of pasta is added on top and the process is repeated for each ingredient.

The lasagne is then baked in an oven and is served by cutting out square pieces for each serving. Seeing all the layers of different flavors and ingredients is as much a feast for the eyes as it is for the tongue! 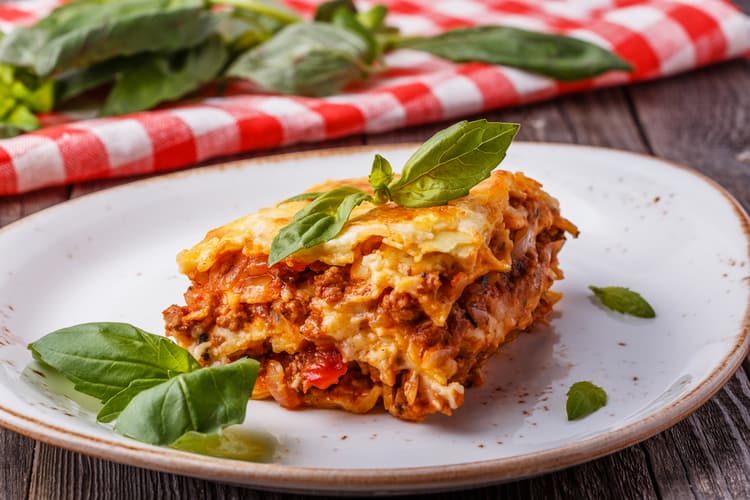 Italians love pasta and it can be very hard to choose just one pasta from the huge variety of pasta dishes. However, pasta carbonara is a real classic. It is traditionally made of spaghetti, eggs, black pepper, pecorino cheese and cured Italian meats such as Pancetta or Guanciale.

The recipe can have many variations as well with other types of pasta such as fettuccine or linguine as well as different cheeses like parmesan. However, the authentic Roman pasta alla carbonara is one of the city’s treasures and one that you can conveniently find across the city. 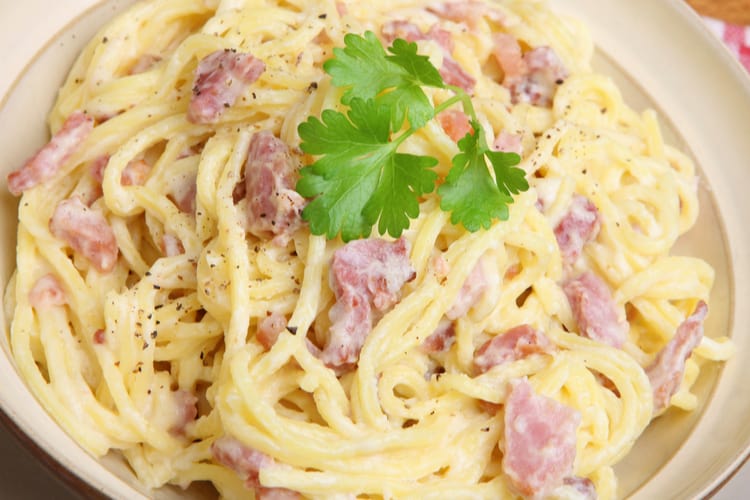 Usually served as an appetizer (or antipasto in Italian), Focaccia is a flatbread with many different variations depending on the region where you get it.

The bread usually has a thicker crust compared to pizza and can be topped with caramelized onions, grated parmesan cheese, sun-dried tomatoes or olives and flavored with herbs such as sage and rosemary.

Some recipes such as the Focaccia Genovese keep it simple with just a drizzle of olive oil and some sea salt. Perfect for starting an ideal Italian meal! 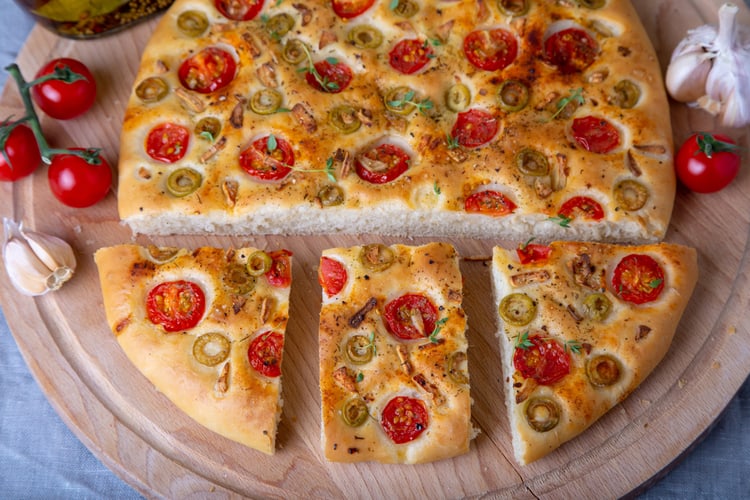 Gelato is usually just thought of as Italian ice cream by those from outside of Italy. Don’t make that mistake! There are a few key differences that separate gelato from ice cream as it has generally lower fat and around 70% less air, giving it a much richer taste, a velvety texture as well as lower calories!

Traditional artisanal gelato is made fresh by modern ice cream parlors all over Italy. We recommend you to step out of your comfort zone and try out a few different flavors every day on your trip to Italy. You won’t be disappointed! 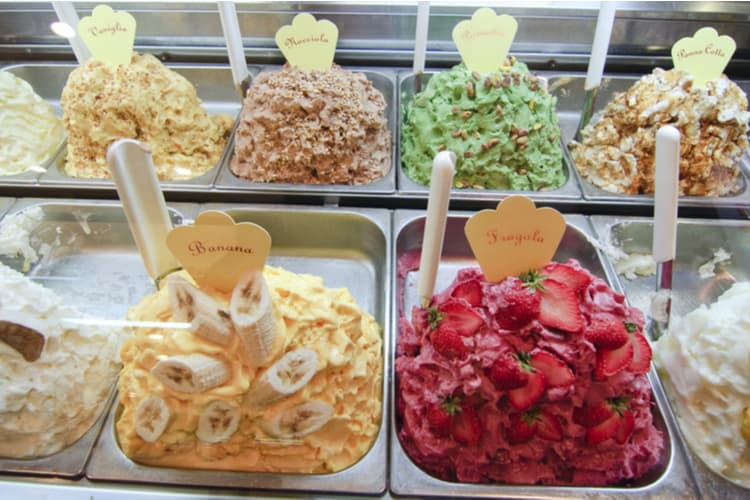 Tiramisu means “pick-me-up” in Italian and it’s a very fitting name for this delicious Italian dessert. It is made of layers of sponge biscuits called ladyfingers that are soaked in coffee and a mixture of soft mascarpone cheese that is flavored with cocoa and combined with a whipped mixture of eggs and sugar. The caffeine from the ladyfingers can give a kick and will definitely give you a kick to pick you up just as the name suggests! 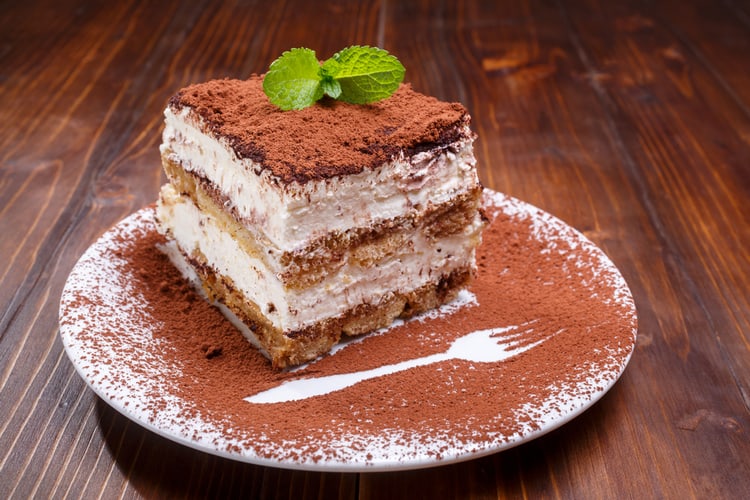 Ragù is a sauce commonly served with pasta but is also used in many other Italian dishes as well. It is usually made of ground or minced meat, along with finely chopped vegetables and tomatoes and then simmered. Ragù alla Bolognese is a pasta dish made of fresh tagliatelle pasta and Ragù sauce and it is often referred to as the national dish of Italy.

Arancini are stuffed rice balls, that are coated in bread crumbs and then fried. Arancini are a very simple snack you can have all over Italy in restaurants bars and street food stalls.

Many varieties exist that add different ingredients into the mix such as the popular “Aranci con Ragù” that adds the famous tomato and meat sauce called Ragù as well as mozzarella.

Other recipes add in mushrooms such as the Arancini con funghi and pistachios like the Arancini con pistacchi. It is also one of the famous base foods for fusion practices around the world. 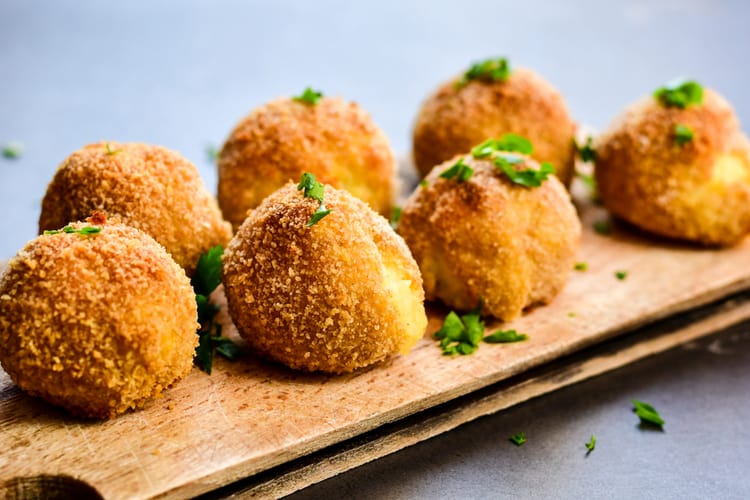 Another appetizer or antipasto in the list is prosciutto. Prosciutto is simply dry-cured ham made from pork leg that is cut into thin slices, it is sometimes served with focaccia bread or wrapped around a breadstick. It can also be added to other dishes and often accompanies them. 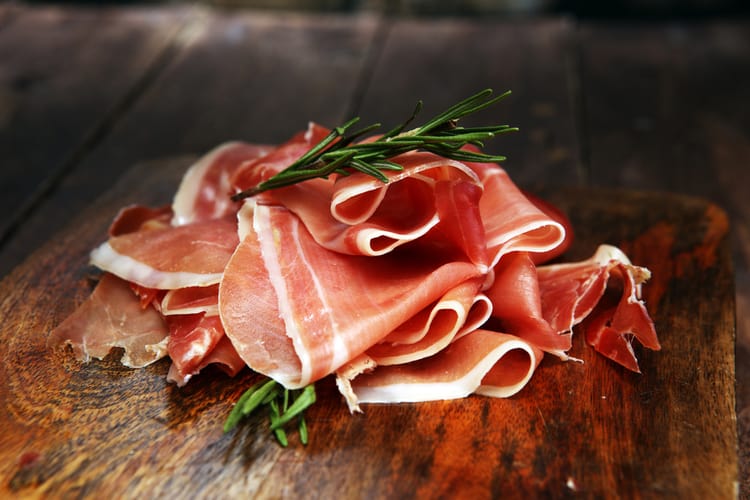 A famous hearty soup from the region of Tuscany, Ribollita is a soup made of bread and vegetables. The name means “reboiled” and it was a dish that was historically popular with peasants and servants who would make it from leftovers.

Typically, it is made by boiling cannellini beans, cabbage, potatoes, onions, and other vegetables in water and adding in bread. This is a dish that stays true to its roots and makes you feel at home. A must-try if you are in the region! 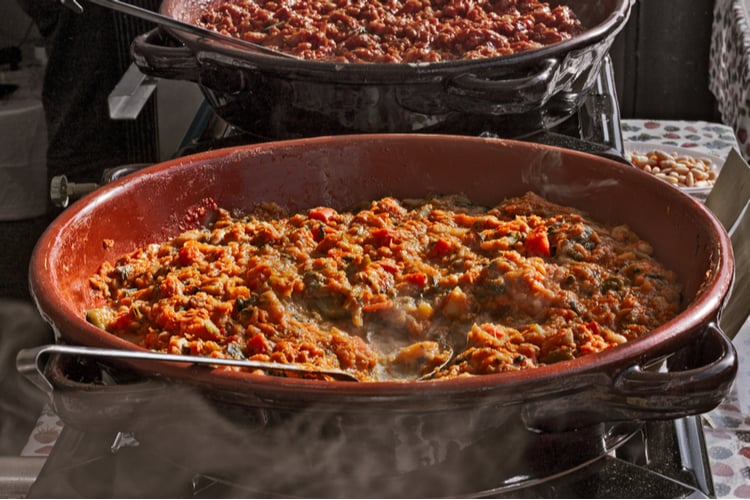 The Bistecca Alla Fiorentina is a T-bone steak that is a popular dish in the region of Tuscany. The meat is taken from the sirloin of the very specific Chianina breed of cattle.

It is then aged for 2 weeks in cold and must be at room temperature before being cooked. A well-cooked Bistecca has a crust on the outside but is still soft and juicy on the inside. The Bistecca Alla Fiorentina is served along with a few typical Tuscan side dishes including roasted potatoes, cannellini beans and spinach with cheese. 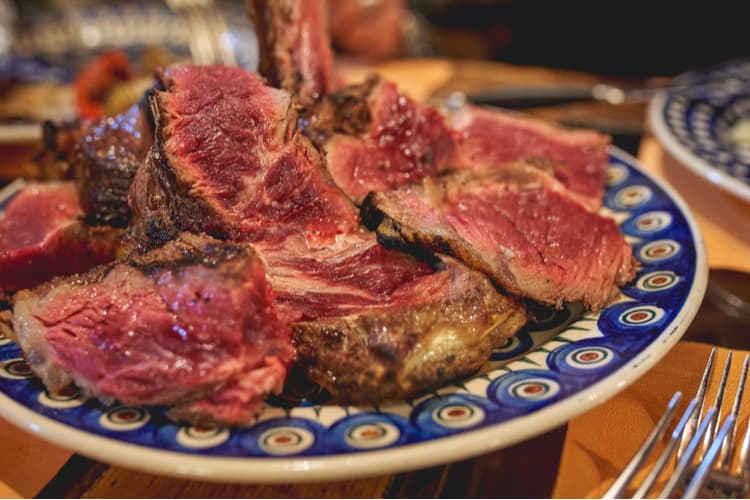 Panzanella is a chopped salad made of bread, onions, tomatoes and is dressed in olive oil or vinegar. It is very popular in the summer in Tuscany and has many recipes that add in various ingredients such as cucumbers and basil.

Other ingredients can be added as well including boiled eggs, bell peppers, tuna, parsley, and many others. It is a versatile dish that is best enjoyed when sitting outside on a warm summer day. 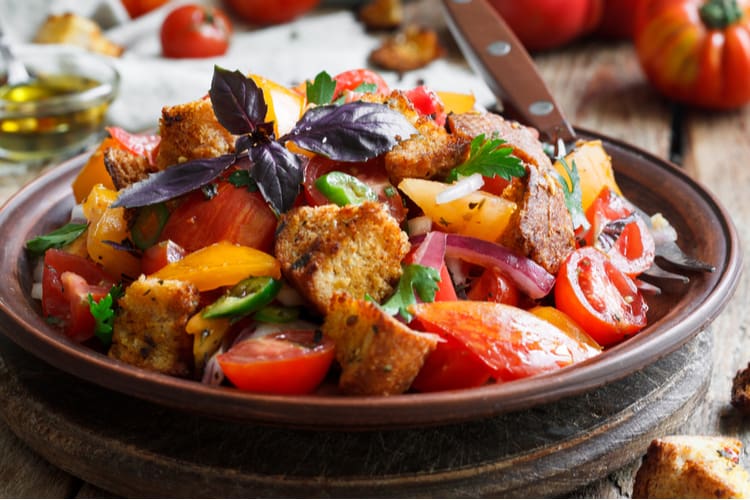 Italy is famous for its pasta but Risotto shows that it still has great rice dishes as well. Risotto is a creamy rice dish from Northern Italy. It is cooked in a broth with butter, wine, onions and saffron which gives it a yellow color.

Meat, fish and other vegetables can be added depending on the region, such as cuttlefish, mushroom, shrimp, chicken, peas or bacon. It is normally served as the first course but some varieties such as the “risotto alla Milanese” can be served as part of the main course as well. It has a rich and creamy texture that is full of flavor. 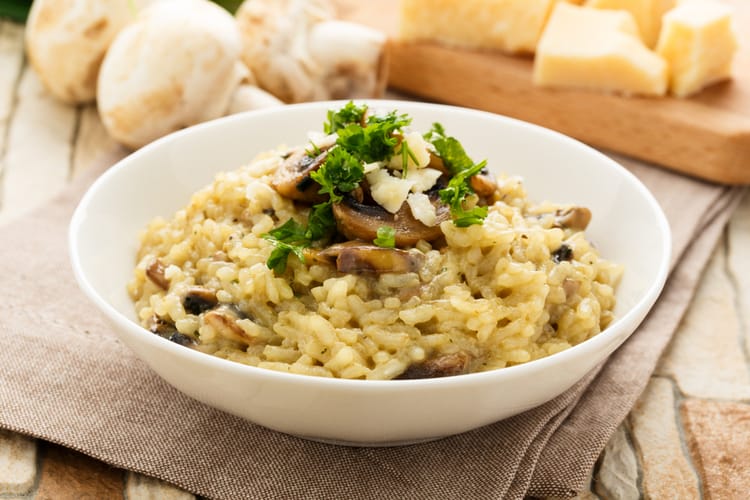 Another appetizer or antipasto that is served before the main course, bruschetta is made of a piece of grilled bread that is rubbed with garlic, with different toppings such as tomato, basil, mushrooms, olives or cheese, and a drizzle of olive oil. There are many variations of this dish with some adding meat, and others preferring to keep it simple. We tried some and they were all delicious. 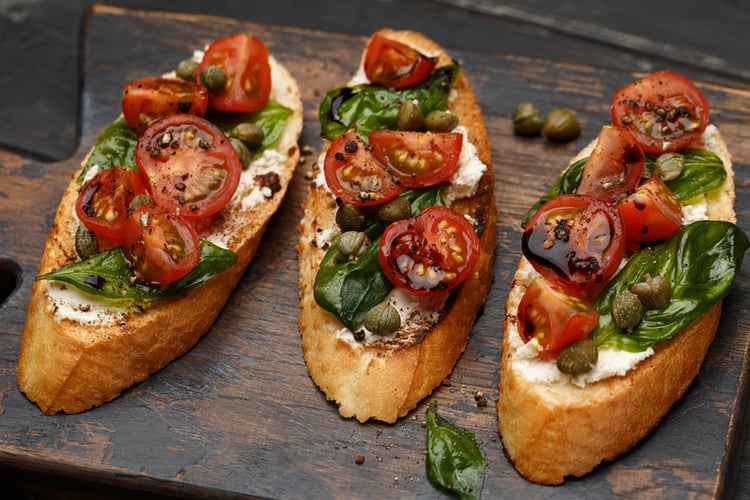 Cannoli are Italian pastries originally made exclusively in the island of Sicily. Made of a shell of pastry dough, the cannoli has a sweet creamy filling made from ricotta cheese.

Small pieces of fruit or sweets are also added to the filling in some places such as pistachios, cherries and even chocolate chips. Cannoli comes in many different sizes from as long as a finger to other varieties as big as the size of a fist. 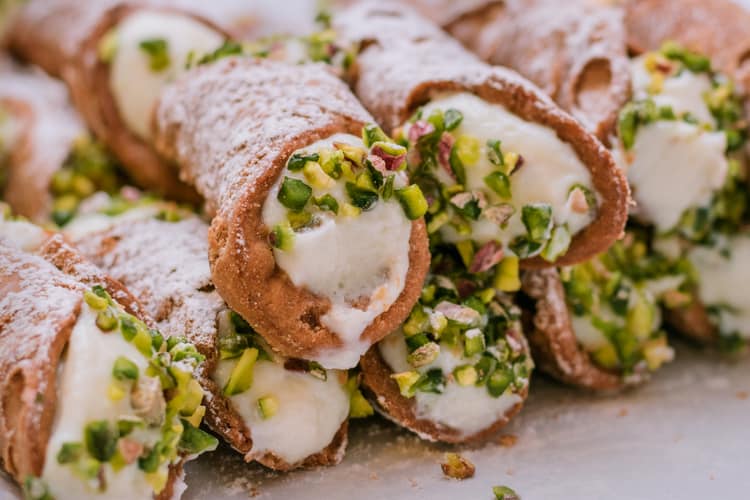 More About Food in Italy

Food in Italy is very diverse and often differs between the regions. With each region having its own unique flavor to add on these classic Italian dishes, the taste can be very different based on what ingredients are used and what recipe is followed.

Typical italian food is very hearty and has a rich flavor due to the ingredients used which are typically fresh. Some very common ingredients are tomatoes, basil, garlic, and olive oil.

The rich sauces and cheeses used in Italian cooking allow the creation of very unique flavors for various dishes based on how they are prepared. Traditional Italian dishes usually have a few simple ingredients that are combined to form something new and different. Many Italian dishes are used as a basis for fusion foods around the world due to their simplicity. 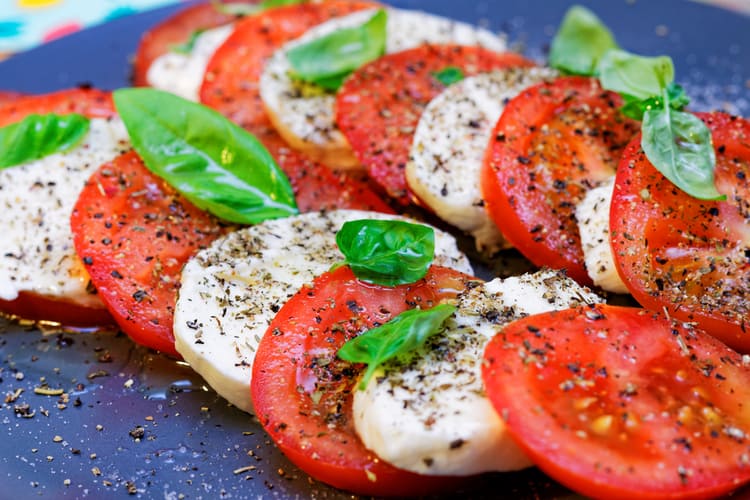 What do Italians eat for breakfast?

The cornetto is a modern Italian favorite for breakfast and is the Italian variation of croissant. You are guaranteed to get many nods of approval from locals when you go for a freshly prepared cornetto in the morning. 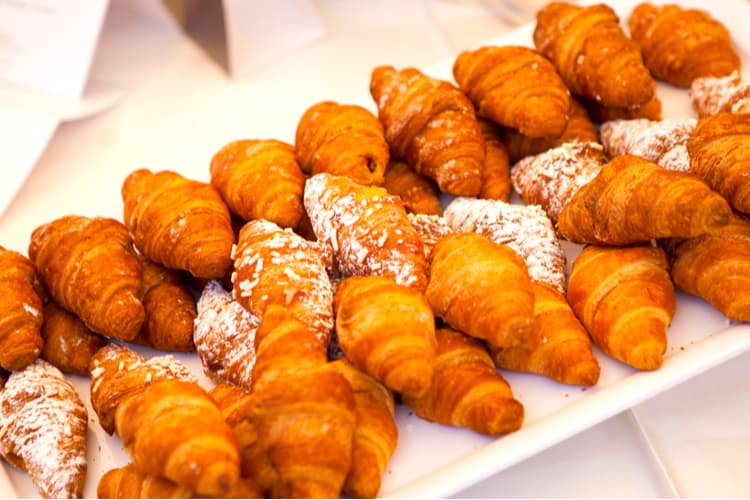 Why is Italy famous for food?

Italian food is one of the simplest and healthiest in the world putting special emphasis on fresh ingredients of the best quality. Quite often, the recipes are passed down the generations of a single-family who proudly carry on the tradition.

What is the national dish of Italy?

Is Italian food healthy or unhealthy?

Italian food is famous for being one of the healthiest in the world putting special emphasis on fresh ingredients of the best quality.

What is the biggest meal of the day in Italy?

The dinner is considered the biggest meal of the day. It is considered more of a family occasion than a simple meal so it often lasts longer than lunch or breakfast. During holidays and extended family gatherings, the feasts can last for several hours. 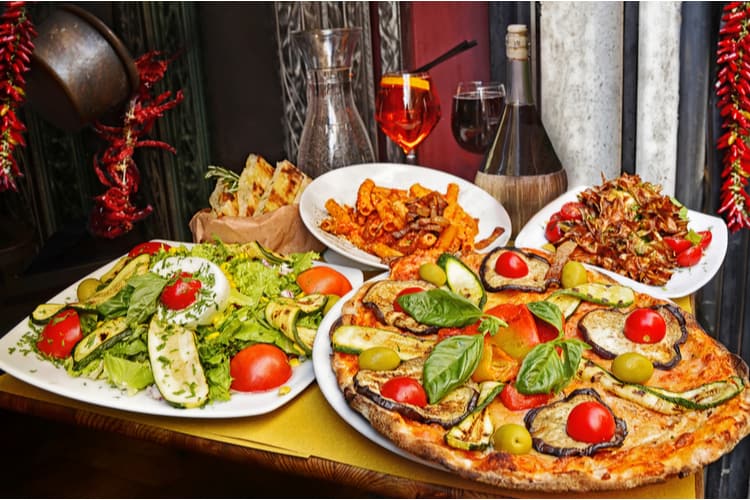 Want to know more about Italian food? Leave a comment below!