France is popular as the hub of fine arts. It is also world-renowned for its foods, especially cheese and wine. These two items themselves are the cornerstones of French cuisine and culture but over the years, there have been specific dishes from all over France that have found their place on the best foods around the world.

In this article, we take a look at a selection of some of the finest culinary delights from France showcasing the best of French cuisine.

The wine used for braising is typically a red Burgundy selection, although French regional variations exist using local wines with coq au Champagne being one of the most famous examples. The name literally translates to “rooster in wine” but chicken is the most widely used meat in this classic dish. 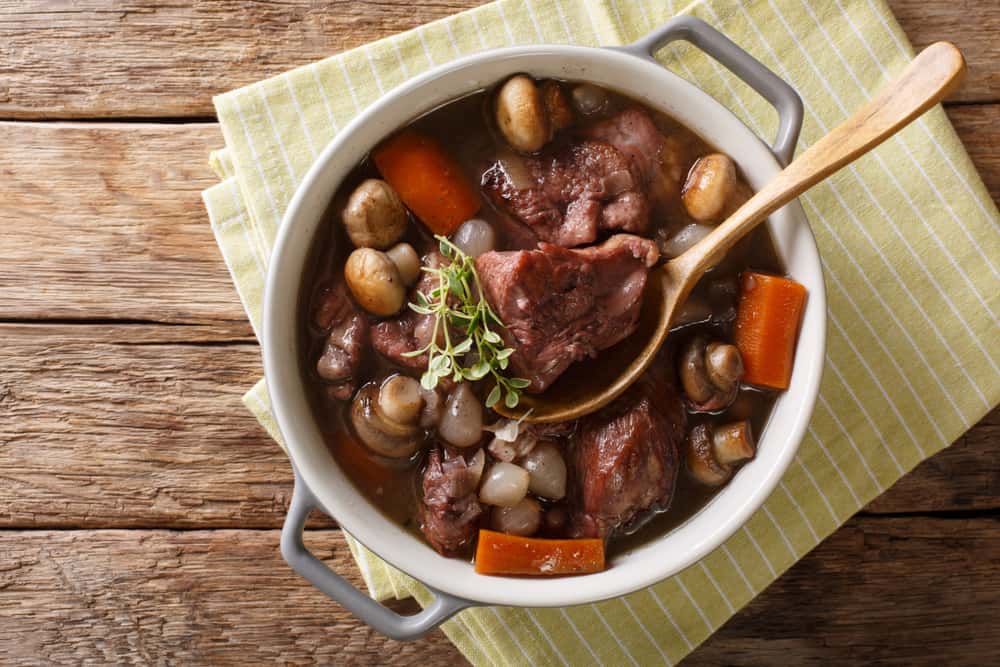 The pot-au-feu is a symbol of France and the definitive traditional family dish. The ingredients are simple; beef made tender by being slowly cooked in a carrot, turnip and leek broth.

However, the proportions and time required for the perfect pot au feu are what sets a good chef apart from great. A local favorite, pot au feu is one of the few traditional dishes from France that found love almost universally. 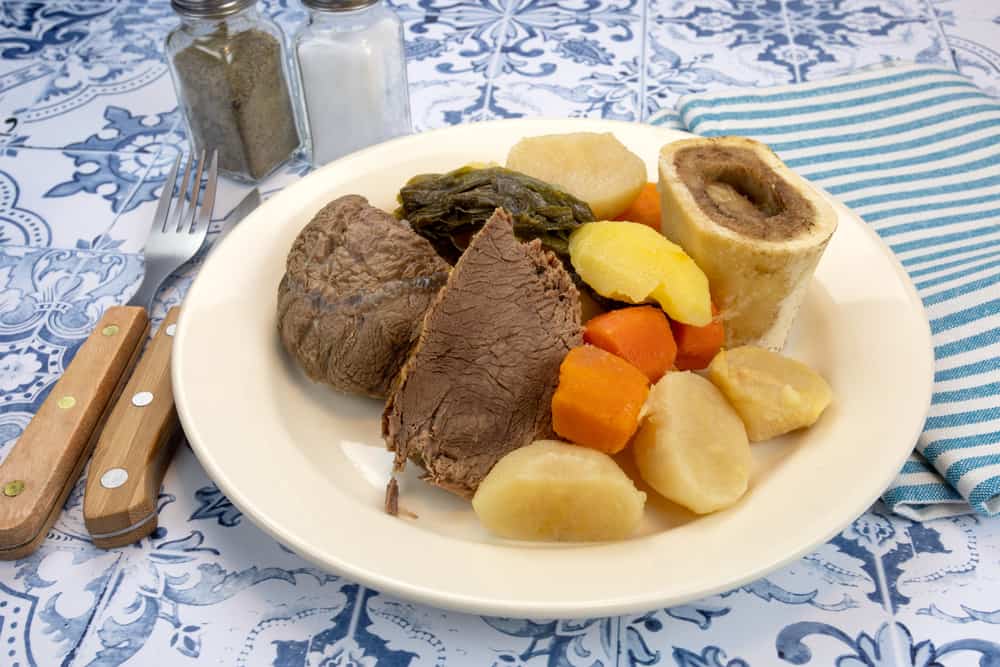 While Ratatouille was already quite well known, it shot to stardom following the Pixar and Disney animated film of the same name in 2007. Ratatouille is a specialty from Nice in southern France but is popular throughout the country now.

Best understood as a stewed vegetable dish, it can combine any of the following ingredients like tomato, onion, zucchini, garlic, eggplant, and bell pepper alongside a selection of leafy green herbs common to the region where it’s prepared.

The final presentation of Ratatouille is an iconic arrangement of the ingredients in concentric circles which can get as colorful as the creativity of the chef. 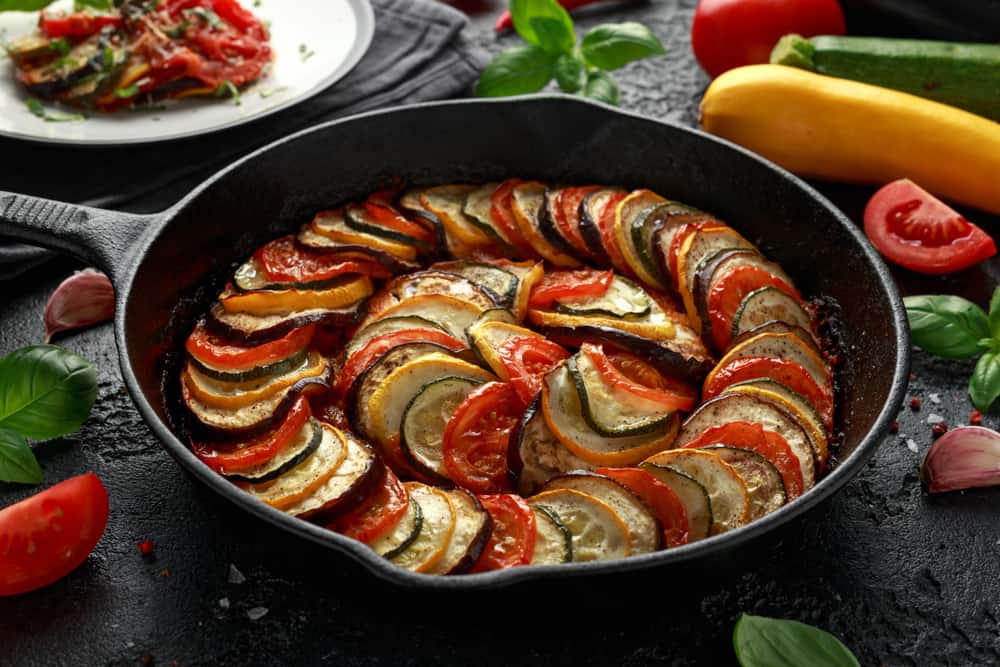 Cassoulet is another famous dish from Toulouse in southern France. It’s generally regarded as one of the favorite peasant dishes to withstand the test of time. The main ingredients include white beans stewed slowly with meat, usually duck or pork.

Sausages, goose, mutton, and chicken are also used to derive variations. The dish gets its name from the pot used to bake it called cassole.

A rich and hearty meal, the cassoulet is perfect for the colder climate which might be a surprise given its origins in the south which enjoys an extended summer and relatively warmer weather in France. 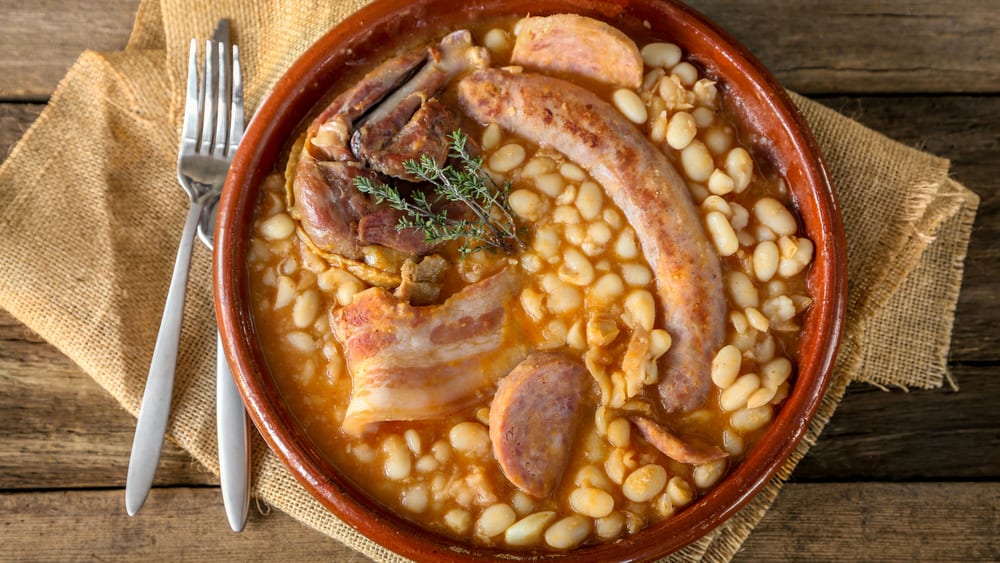 The Onion Soup is a traditional soup prepared with onions and beef. It is usually served with croutons and melted cheese on top. Another dish popular with the lower classes of France, this soup’s roots can be traced back to the Roman Empire in the early 1st century.

The remarkable taste is a result of caramelizing the onions and brandy is typically added at the end of the slow cooking process. The soup’s most recognizable variations are achieved by adding milk or thickening it with eggs or flour. 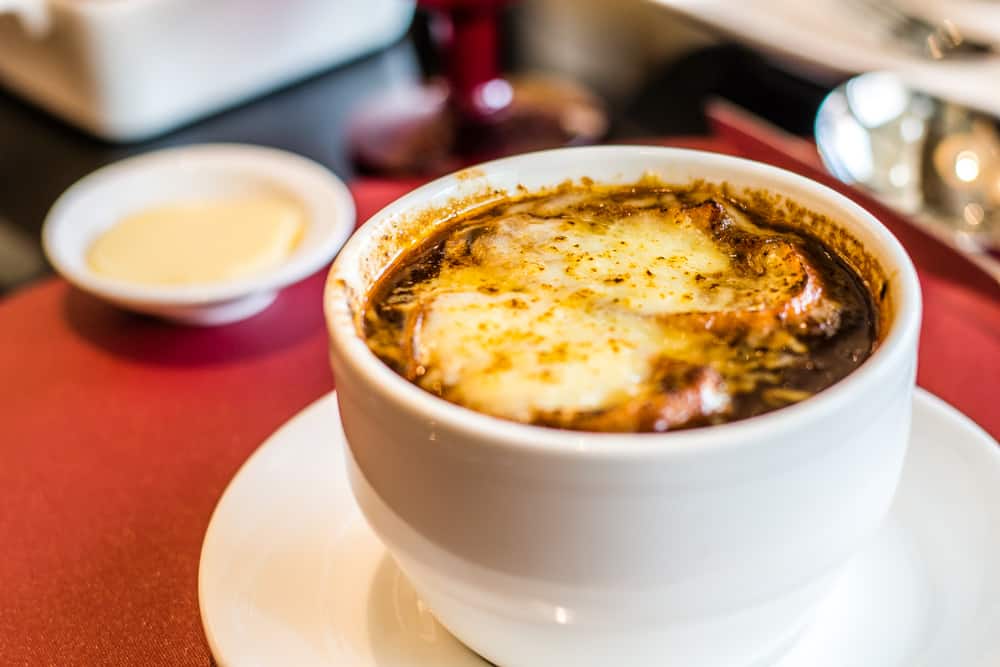 Chocolate soufflé in particular is something you need to try in France. The word soufflé literally means to ‘blow out.’ The soufflé is an airy, egg-baked dish with origins dating nearly two centuries back.

Soufflé is often eaten savory or sweet in France. Being one of the most copied desserts from France, the chocolate version that we love comes with a crispy chocolate crust with an oozing, creamy chocolate core turning this delightful dessert into a sweet surprise.

Confit de canard is a delicious French delight made of canard (duck), although pork and goose are also commonly used to make other confit variations. Confit means to cook very slowly and confit de canard, in particular, is considered one of the finest dishes in the country.

The meat is specially prepared using a preserve and confit process. The duck meat is marinated in salt, thyme and garlic for up to a day and a half before being slow-cooked in its own fat at low temperatures.

It is typically served with confit roasted potatoes and garlic on the side. 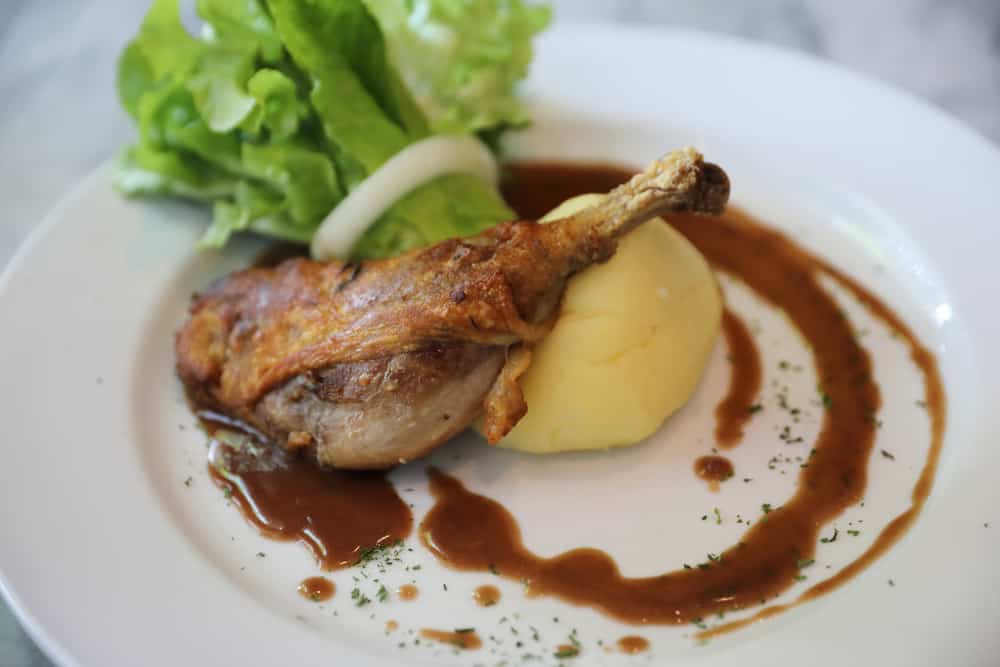 Salade niçoise is a famous French salad from the Provence region. While it is usually served as a side dish, it can also be considered as a light meal on its own.

Typically, a combination of fresh tomatoes, lettuce, boiled eggs, tuna and green beans, some chefs have successfully experimented with olives and anchovies to create specific versions.

The dish is simple to prepare and many varieties come as a result of local ingredients and the imagination of the chefs who love to get creative to leave a personal mark. 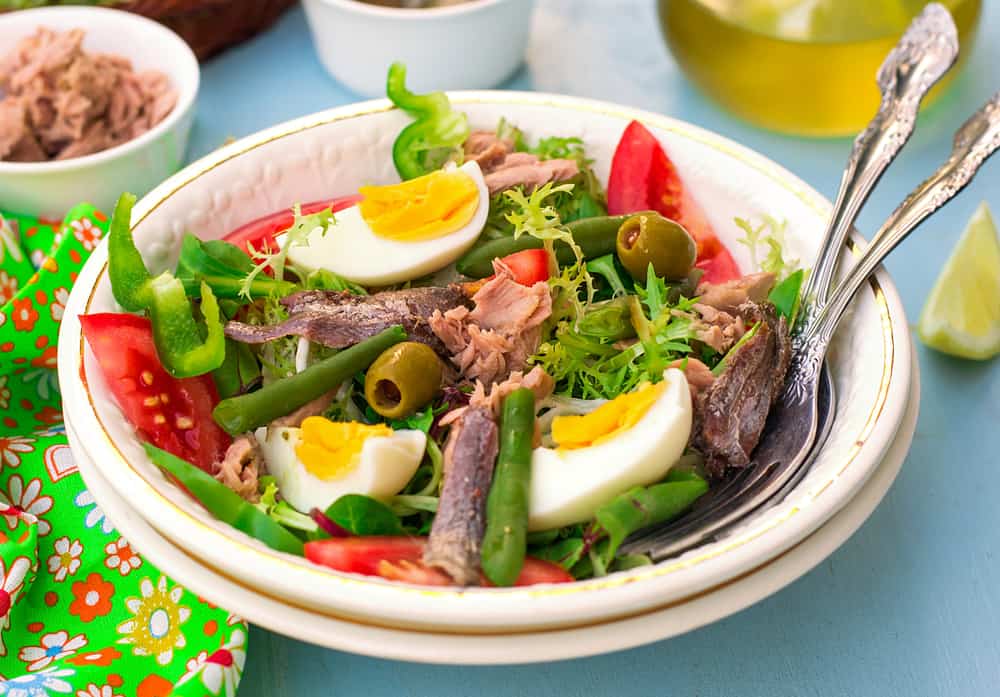 Cheese soufflé is another classic and deserves its special entry in this list. As one of the most technical and difficult-to-master dishes on this list, it is very complicated to make a perfect cheese soufflé.

The success depends particularly on the duration of cooking and the temperature of the oven used. A slight variation of a few degrees could lead to a catastrophic result. The preparation is basically the same as other kinds of soufflé.

There are some special varieties of soufflé au fromage with lemon or chocolate that are enjoyed by locals and tourists alike. 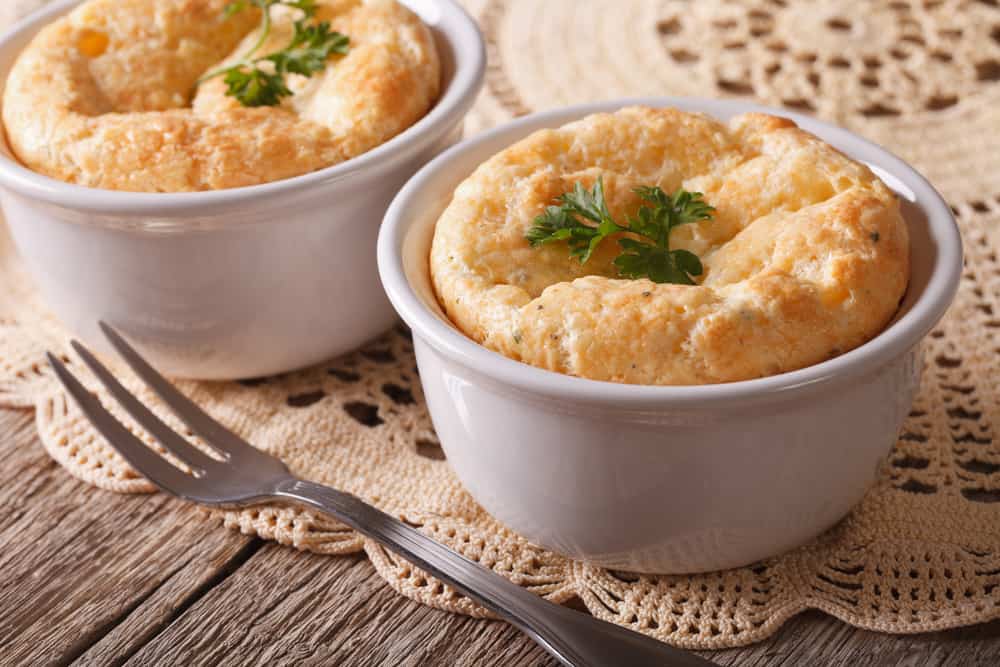 A list of French cuisine would be incomplete without Boeuf bourguignon. Another traditional family meal, this beef stew is a local favorite.

Comprising of slow-cooked beef cuts with red wine, root vegetables like carrots, radishes, and others alongside mushrooms, this dish finds its origins in Burgundy, a region famous for its cattle farming and red wine. 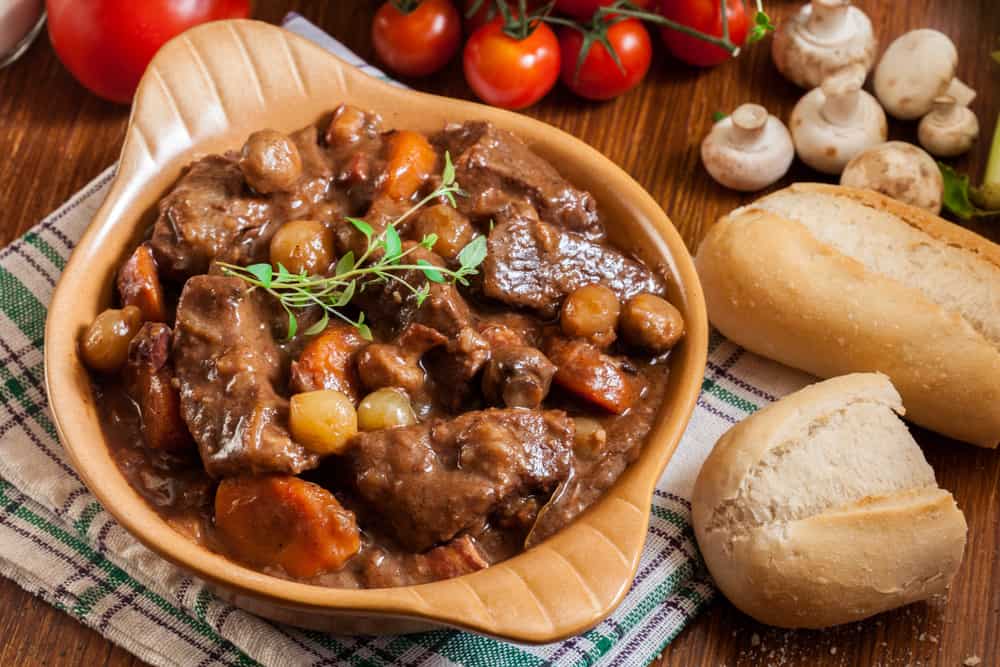 Huîtres or oysters are one of the most important food items in the festive period and holiday season in France. The shellfish can be eaten warm, but real oyster lovers prefer eating it raw and still alive.

You can eat the oysters plain or with a dash of lemon juice, or vinegar, or a shallot sauce. It can be an acquired taste but we loved it and can guarantee that you will not regret trying it. 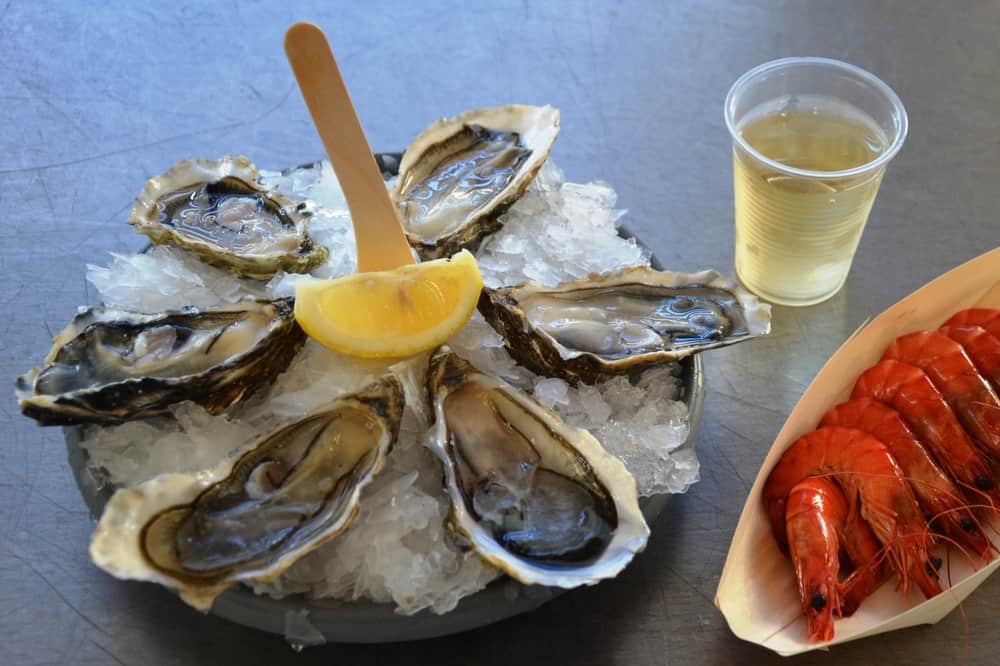 Originating from Alsace the quiche Lorraine is a simple tart with a topping. The topping can be a mixture of cream, milk, eggs, grilled bacon and nutmeg in accordance with Alsatian traditions.

The ingredients give the tart a slightly smoky flavor that is celebrated and well-liked nationwide in France. Today, quiche Lorraine has become so popular that you can find it in many bakeries and restaurants. 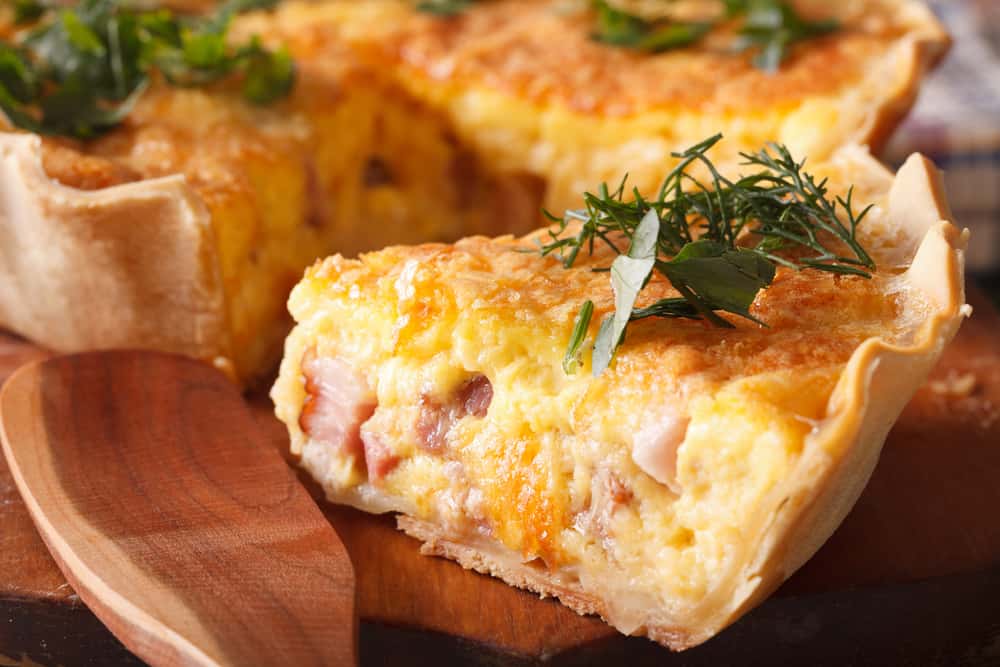 Legend has it that the Tarte Tatin was born of a mistake when Stephanie Tatin almost burned her normal traditional apple pie. Her attempt to rescue the pie resulted in what would become the signature dish at her Hotel Tatin.

The tart is basically a pastry prepared by leaving the fruit (usually apples) in sugar and butter for an extended period of time before baking it in the oven. It is usually prepared with either puff or shortcrust pastry. 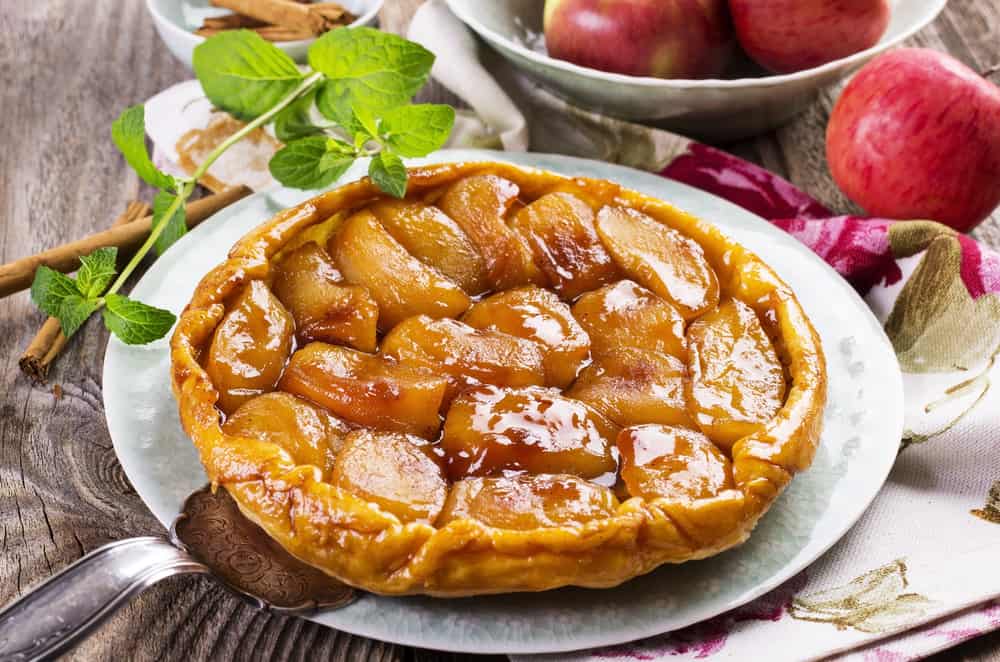 Flamiche means ‘cake’ in Flemish and this dish finds its origins in Northern France. It comprises of a puff-pastry crust filled with cheese and vegetables and can often be mistaken for quiche but don’t say that to the locals!

Leeks and cream are used traditionally as the choice of fillings. An alternative version of Flamiche is prepared without the top crust of the pie. Both variations are worth a try and definitely recommended!

Foie Gras is the quintessential French holiday dish. A specialty dish, it is made from the fatty liver of duck or goose and the holiday season is considered incomplete without it.

While famous all over the world in many variations, the French way to prepare foie gras is to use low heat for the method of preparation.

Foie gras can be roasted, sautéed, pan-seared or grilled and served with a variety of flavorings. Some of the most common pairings include a piece of brioche with a bit of onion spread, fig jam, truffles, mushrooms or even brandy-like cognac. 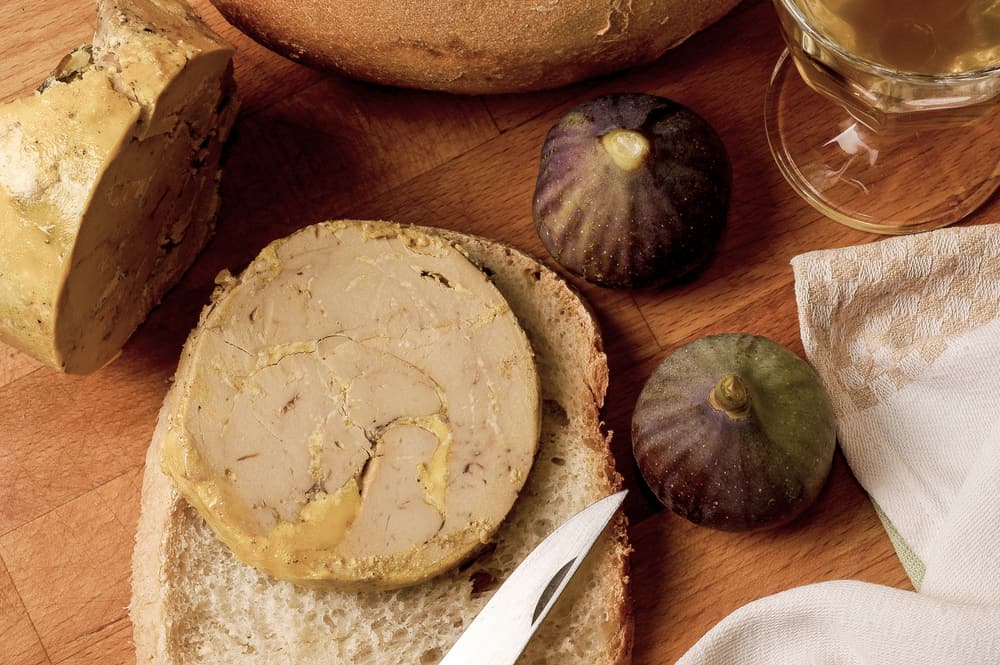 More About Food in France

Food in France is celebrated and special emphasis is laid on the presentation as it is considered an art form. Depending on the region where you are located, there are local culinary delights to satisfy your tastebuds.

With each region having its own unique flavor to add to these classic French dishes, the taste can be very diverse based on the ingredients used and the recipe followed. French food is very particular about the various aspects of the meal.

Pairing wines with the meal is serious business and sommeliers are in high demand all over the country. Traditional French dishes usually have a few simple ingredients that are combined to form something new and different.

What do Frenchs eat for breakfast?

The French breakfast is very light and generally comprises of a pastry like a croissant or simply a toast with jam or butter paired with coffee or tea. Lunch trumps breakfast as the most important meal of the day so its quite common for the French to not pay much attention to breakfast.

Why is France famous for its food?

French cuisine is an art form in its own right. The chefs are creative and their imaginations and creations are celebrated worldwide.

What is the national dish of France?

While there is no dish that is officially recognized as a national dish of France, the pot au feu is casually termed as the national dish due to its role as a peasant dish and a modern favorite.

Is French food healthy or unhealthy?

French food can be healthy if you choose to follow some specific diet routines. It can be unhealthy indeed if consumed in large amounts as the fat content in French cuisine is generally quite high.

What is the most important meal of the day in France?

Lunch is considered the biggest meal of the day. While not exactly a family affair, the French love to take their time at lunch and bosses often turn a blind eye to employees taking slightly longer at lunch as it is deemed culturally acceptable.