Utah is home to some of the most scenic landscapes in the United States. Natural rock formations carved out from centuries of erosion and weathering makes the national parks in Utah a must-see for those who visit the state. The parks attract millions of visitors every year to admire the beautiful sights.

Zion National Park established in 1919 and now one of the flagship national parks in Utah. The centerpiece of the park is the Zion Canyon. It’s a natural wonder in Utah with lots of excitement and activities for visitors.

Zion Canyon stretches 15-miles long and reaches depths of over 1,600-feet. The canyon was carved out by the Virgin River, revealing beautiful cliffs of Navajo Sandstone. It’s the main attraction of the national park, which includes other natural formations, including mountains, natural arches, and rivers.

There are a variety of ecosystems within the park, such as desert, forest, woodlands, and riparian. The biodiversity of the park leads to an abundance of plants and animals – hundreds of species of birds and over 75 mammals.

Zion National Park is one of the most popular parks in Utah, attracting an average of over four million visitors every year. The park is popular for sightseeing and outdoor activities that immerse visitors into the beautiful landscape. It’s a great place to include on your 7-day Utah Road Trip

Some of the most popular activities in the park include horseback riding, rock climbing, camping, and nature walks. The park is known for its many trails that take visitors to unique sections of the park to discover the natural landmarks. The viewpoint at Kolob Canyons Road is a popular destination for sights of the beautiful scenery. Many visitors also take scenic drives through the park.

The park includes several facilities, including a visitor center and Zion Nature Center. You can learn a lot about the park and access guided tours from these locations. 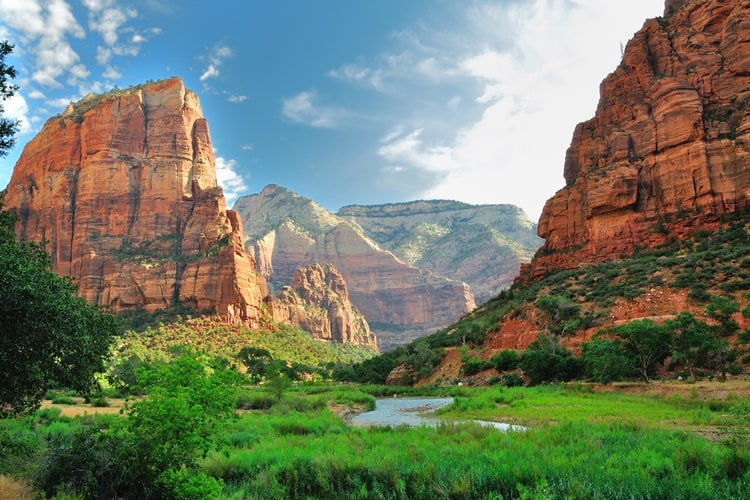 The name of Bryce Canyon National Park may be a bit deceiving since the main attraction is not a canyon. Bryce Canyon is a rare formation of pinnacle rocks called hoodoos. Canyons form from river erosion, but these pinnacles instead form a unique amphitheater-style attraction.

Officials designated Bryce Canyon as a national park in 1928, primarily to preserve the natural beauty of the landscape. The park represents over 35,000 acres of distinct reddish, orange rocks. The top of the cliffs reaches a maximum height of over 9000-feet at Rainbow Point. The park also includes national landmarks such as natural arches and mountains.

Bryce Canyon National Park is one of the most remote national parks in Utah. Even so, it received millions of visitors annually. The park was initially discovered for its scenic beauty and remains a major reason for so many visitors.

There are more than one dozen observation points around the giant amphitheater, providing breath-taking views of the red rocks. Scenic roads are established throughout the park for observation while driving.

In addition to admiring the scenery, visitors also have a range of outdoor activities available at the park. There are plenty of trails leading up to the viewpoints as well as options for backcountry hiking. The park also features two campgrounds and lodging accommodation for modern stays.

The visitor center and bookstore are an excellent resource for learning more about the park and accessing guided tours. 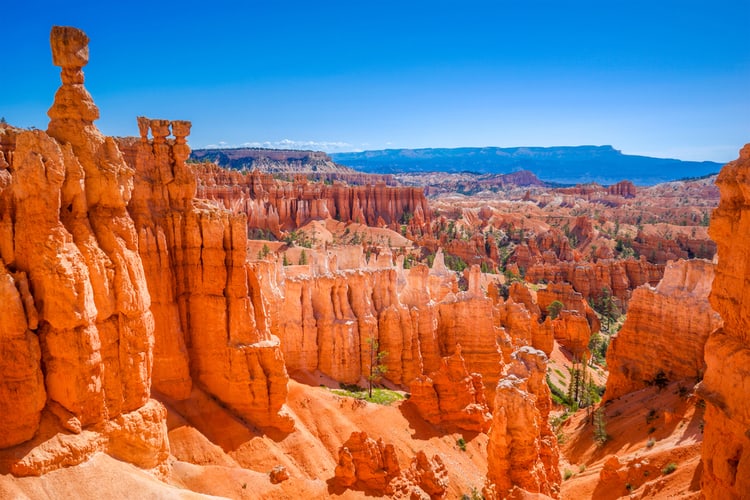 During an exploration of southeast Utah, the Canyonlands National Park caught the eye of officials who finally declared it a national park status in 1964. The park is located outside of Moad, Utah, where visitors will come across the same majestic beauty when approaching it for the first time.

Canyonlands National Park is recognized by its colorful landscape, eroded by the Colorado River and Green River over time. Today, the landscape is full of unique natural spectacles – canyons, mesas, and more. The entire park encompasses a desert environment surpassing 300,000 acres.

Lots of wildlife thrive in the Canyonlands National Park. It’s home to animals, including black bears, bobcats, and cougars. A couple of the most common animals are mule deer and desert cottontails. There are also over 250 bird species.

Outdoor recreation is one of the main draws for tourists to the park. The diverse landscape makes it an ideal location for activities such as hiking, mountain biking, four-wheeling, rafting, and backpacking. There are several remote trails located within the park.

Canyonlands is in a constant pursuit to find a balance between tourism and preservation. It continues to grow thanks to the popularity of it for the natural scenery and fun activities. 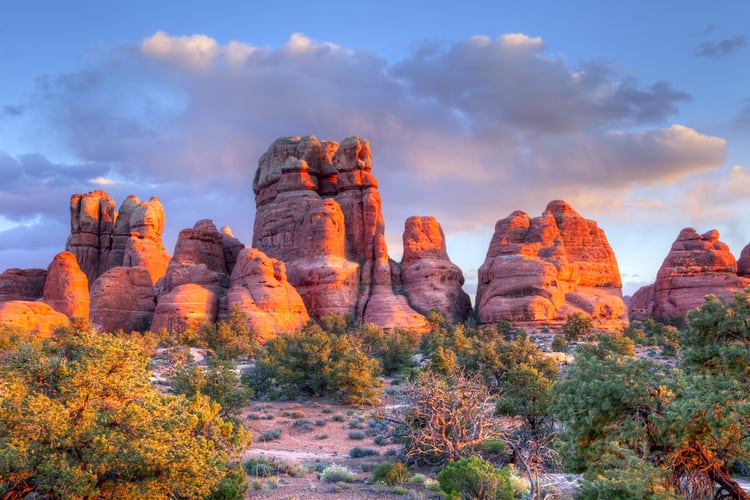 Capitol Reed was established in 1971 for the preservation of the desert landscape. Like many other national parks in Utah, the landscape is known for its scenic beauty. The multi-colored land includes many features such as canyons, ridges, towers, and arches. The most notable natural formations are the sandstone cliffs and white domes, from which the name derives.

Capitol Reef is North America’s largest exposed monocline, a unique section of warped Earth extending 60-miles long and 6-mils wide. A majority of the park is encompassed by the Waterpocket Fold, with the endpoints being the Thousand Lake Mountain and Lake Powell.

The park is very accessible for visitors – a major road was constructed leading up to the park. It makes for great scenic drives, although most of the best park features are only accessible outside of the main road route.

Capitol Reef welcomes over one million visitors predominantly arriving between late spring and early autumn. A majority of the park is considered backcountry – unpaved trails and routes that lead visitors to the famous natural landmarks within the park and excellent observation views.

The park also includes a visitor center where guided tours are available. Visitors can also explore the park via self-guided tours.

There are a variety of activities available for visitors, including hiking, camping, bicycling, canyoneering, and rock climbing. There are a total of 71 campsites, some modern and others more remote for backpacking. 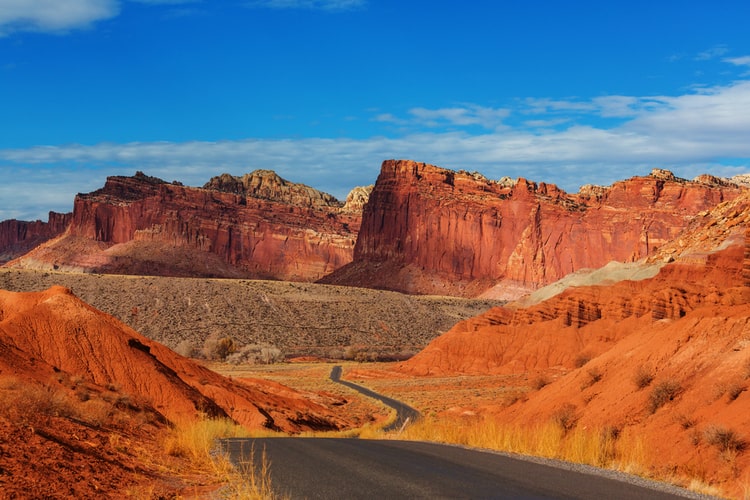 There are more than 2,000 sandstone arches that formed naturally within the park, caused by an evaporated river and a salt bed foundation. The park includes the highest density of natural arches on Earth. There are many famous rock structures found within the park, including the Delicate Arch, an iconic symbol of Utah, Balanced Rock, and the Landscape Arch, the longest in the park.

The entire park is situated on the Colorado Plateau, a desert landscape reaching elevations of over 5,000-feet via Elephant Butte. In addition to the rock formations, the park also includes an abundance of desert animals and plants.

Arches National Park has a visitor center providing information and guided tours through the park. It receives more than 1.6-million visitors every year. Visitors have lots to see and do within the park, from admiring the views of the arches, recreational activities, and even sightings of rock markings left by ancient civilizations.

Recreational activities are highly regulated within the park to preserve the delicate arch structures. Some of the top activities for visitors include scenic drives, hiking, camping, backpacking, and astronomy. 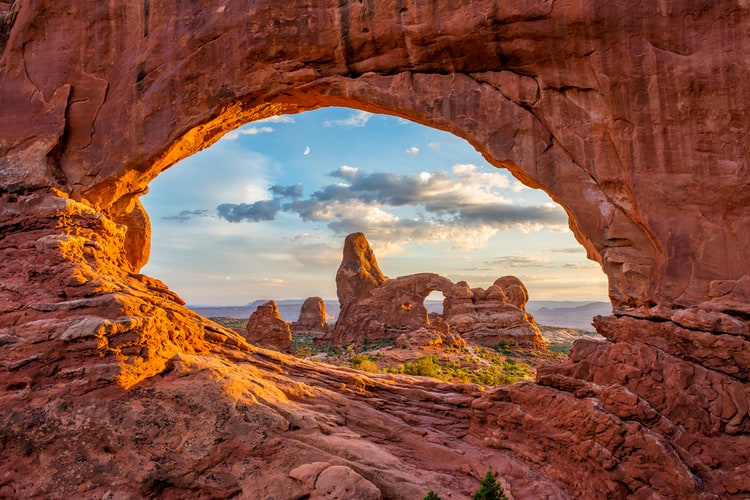 How many national parks are in Utah?

Utah has a total of five national parks.

What is the biggest national park in Utah?

Utah’s biggest national park is Canyonlands, with an area of over 337,000 acres.