Colorado is centrally located in the United States, with a vast amount of diverse landscapes. Although few compared to other states, the national parks in Colorado represent a great history of the land and Native American tribes that once lived in the region. Colorado’s national parks are a major tourist attraction to visitors of the state for a memorable experience.

The extensive site includes over 5,000 individual sites throughout the park. There are over 600 habitats carved directly into the mountains, called cliff dwellings. These dwellings were used for shelter by the natives. Mesa Verde is home to the largest cliff dwelling in the US, appropriately called Cliff Palace. The cliff includes the most habitats of all the mountains.

Mesa Verde National Park is a popular destination for tourists and research.

Researchers take advantage of the well-preserved site to explore the history of the Ancestral Puebloan civilizations. Since exploring the site, archaeologists have discovered tools and weapons used for hunting. Other objects also shed light on the nomadic lifestyle of the civilization that retreated to the cliff dwellings during certain times of the year. The objects shared a connection to objects found in neighboring regions of the US.

The Mesa Verde National Park is a rare opportunity to discover the nation’s history and the lifestyles of past civilizations. The pueblos date as far back as 650 before transitioning to the cliff dwellings. Even after so many centuries, the architectural structures remain preserved, an ode to the genius design.

The park is very tourist-friendly, attracting hundreds of thousands of visitors every year. Visitors have a chance to see many of the top archaeological sites for observation, including the Cliff Palace, Chapin Mesa, and unique treehouses. Guided tours are available through the visitor center. There are even accommodations and dining available within the park. 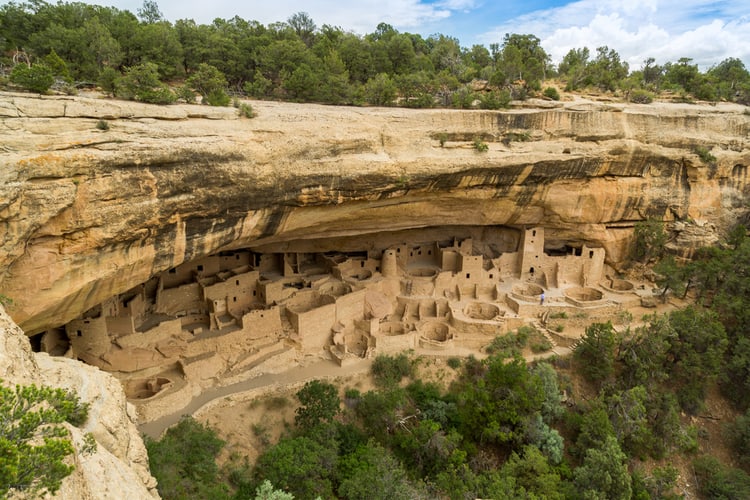 The Great Sand Dunes is a unique national park in Colorado. Located along the edge of the San Luis Valley, the park features the tallest sand dunes in all of North America. The dunes, developed over many centuries, reach heights of over 750-feet.

The dunes developed with the help of sediments deposited over time – from surrounding mountains, receding lakes, and other sands that blew in the region. The total area of the national park is over 150,000 acres (including the adjacent preserve) with a large portion dedicated to the dunes. The other sections include grasslands and mountains.

Great Sand Dunes National Park is popular for tourists, attracting over 400,000 visitors annually. The dunes are best accessible via the Medano Creek during the low season of the water. It’s a path initially used by Native Americans. Other areas of the park are accessible via roads and trails.

There are lots of recreational activities available for visitors to the Great Sand Dunes – hiking is one of the favorite activities. The Mosca Pass Trail is one of the most popular trails with scenic views along the journey. Other hiking paths take visitors through the dunes or grasslands.

Other popular activities include sandboarding, sand sledding, and four-wheel off-road driving. Visitors an enjoy these activities all year long with equipment available for rent at vendors nearby the park.

Many of the visitor recreational activities are designated by area. There are specified sections of the park for horseback riding and campground for picnics. The park also includes a visitor center with guided trips to the park available. 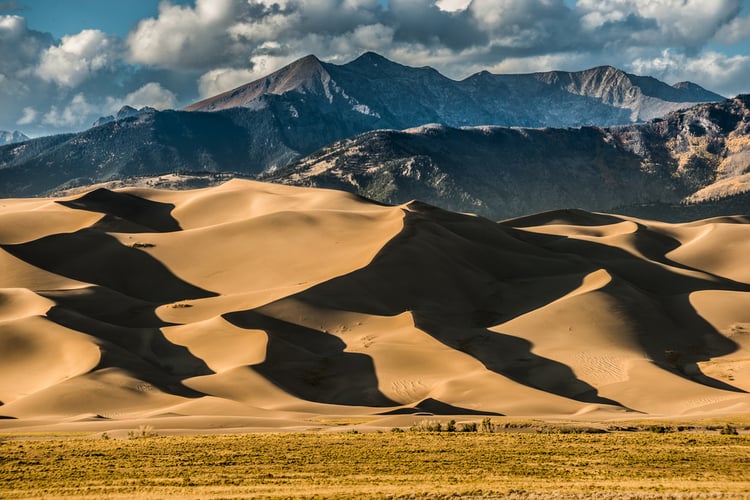 Black Canyon of the Gunnison

Black Canyon of the Gunnison allows visitors a glimpse into the shadowy canyon located in western Colorado. The park was officially established in 1999, which includes only a 12-mile section of the Gunnison River. The mighty river carved its way through the landscape over time to create one of the deepest, narrowest, steepest, canyons in the US.

The Black Canyon of the Gunnison is a fitting name for this section of the canyon. It only gets approximately a half-hour of sunlight due to its properties. It’s known as one of the steepest mountains in North America. The shape and depth of the cliff make the walls appear black to viewers from the top.

The Gunnison River is only one of the natural causes to form the canyon. The cliff walls show layers of volcanic ash from historical natural causes. The tallest of which is the Painted Wall, Colorado’s tallest sheer cliff.

The Black Canyon of the Gunnison national park is an adrenaline rush for visitors standing at the top of the cliffs or venturing to the depths to explore. The park has two entrances: on the south end of the canyon and to the north, typically closed during the winter season.

One of the best leisure activities at the park is to visit one of the five designated areas for excellent views and photo opportunities. The park features lots of native flora and an abundance of wildlife throughout the park.

Rock climbing is a popular activity for adventurous visitors, typically only reserved for skilled climbers. Visitors can hike down the cliffs to the Gunnison River for fishing and rafting in certain areas. Canyon tours are available through the park’s visitor center. 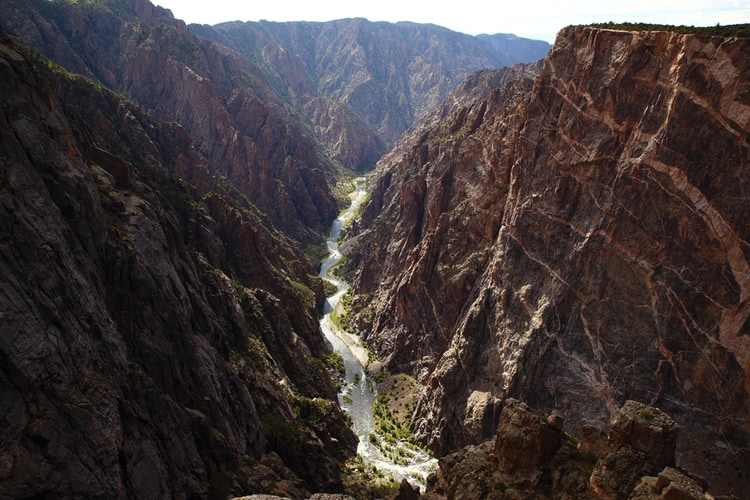 The Rocky Mountain range is one of the largest in the US, passing through Colorado. Colorado designates the Front Range section of the park and surrounding forested areas as the Rocky Mountain National Park. The park was officially established in 1915 and later declared one of the first UNESCO World Biosphere Reserves for the preservation of the ecosystem.

The Rocky Mountain National Park has a very diverse landscape, home to lots of species of plant life and animals. Features of the park include mountains, tundra, lakes, and forests, all open to the public to enjoy.

Visitors can easily access Rocky Mountain park via Trail Ridge Road. It’s the main road running through the park. It’s one of the most visited national parks in the US, surpassing an average of 4 million visitors every year. There are five visitor centers to manage the high tourist traffic to the park with lots of information and tours available.

Many areas of the park are open to the public thanks to lots of trails winding throughout the park. The hiking trails range in difficulty – leisure walking for all ages to more advanced trails for experienced hikers.

The Rocky Mountain National Park includes over 100 wilderness campgrounds. The campgrounds are all unique, some designed for leisure camping or availability for backpackers exploring the backcountry of the park. Other activities include horseback riding, mountaineering, and fishing at the various lakes and streams.

Longs Peak, located within the park, is the highest peak, where visitors can enjoy the views from a distance or experience its towering height with climbing. Rocky Mountain National Park is open year-round, although routes are limited during the winter months due to weather conditions. 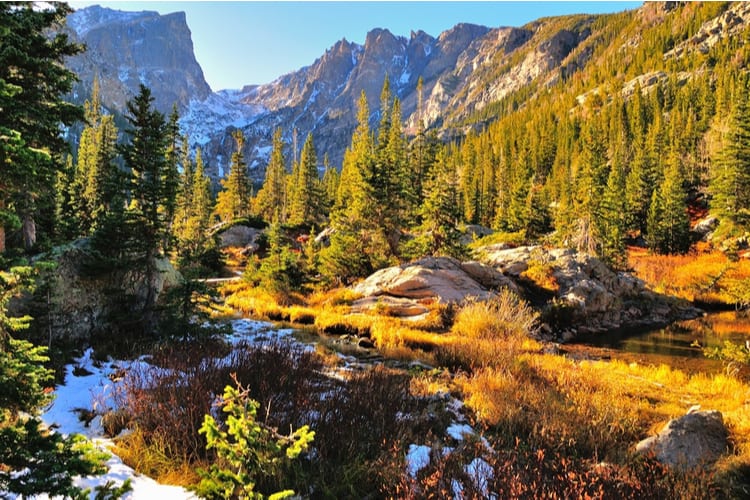 How many national parks are in Colorado?

Colorado has a total of four national parks – Mesa Verde, Great Sand Dunes, Black Canyon of the Gunnison, Rocky Mountain. The Colorado National Monument is also considered a national park by some references and included within the official National Park Service unit.

The biggest national park in Colorado is the Rocky Mountain National Park, with a majority of the extensive land size due to the mountainous region and high peaks.