Croatia receives nearly 20 million tourists every year, many of which arrive to experience the plentiful national parks in the country. There are eight national parks in Croatia, each with unique features and characteristics – no two parks are alike.

Whether you want to see the beautiful natural landscape of Croatia or enjoy adrenaline-filled outdoor activities, there is a Croatian national park suitable for you!

Risnjak National Park is in Gorski Kotar, the most mountainous region of Croatia. It’s a developed park easily accessible to tourists to see the vast landscape and peaks included within the park’s range.

Officials designated Risnjak National Park in 1949 after discovering the rich flora located in the region. It’s a habitat for rare and endangered plant species. The lynx is an iconic animal in the area, once eliminated, but later reintroduced.

Risnjak National Park features facilities for tourists, concentrated on the outer borders of the park, including a visitor center and restaurant. It’s a great place to start to find the Educational Trail, one of the most popular routes that give visitors an up-close look at the diverse vegetation.

Visitors enjoy the national park for hiking trails up the summits in the park – the highest peak is the Veliki Risnjak, reaching over 1,500-meters high. Other points of interest include the Kupa River. 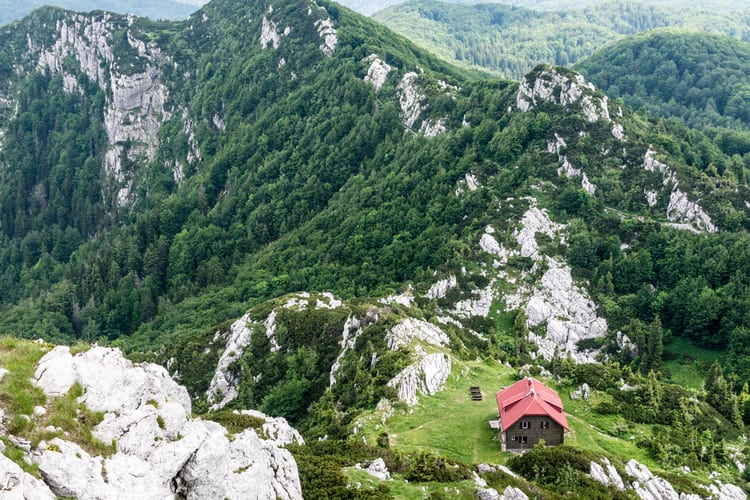 Brijuni National Park consists of 14 small islands that make up the Brijuni island chain. The park also includes the marine area surrounding the islands. The islands are a popular tourist destination for the natural scenery and beauty, surprising wildlife, and archaeological sites providing evidence of the islands’ past.

Visitors can take a ferry from the mainland to the islands to visit the national park. There are lots of things to do in Brijuni National Park to enjoy the outdoors such as biking around the island, playing on the golf course, lounging on the beach, or hiking through the lush forest.

Brijuni National Park is known for the wildlife present on the island. Many of the animals were imported and now reside here, either wild or within the designated safari park. Other tourist sites within the park include archaeological sites full of ancient ruins of villas and a palace, and even a site with hundreds of dinosaur footprints. 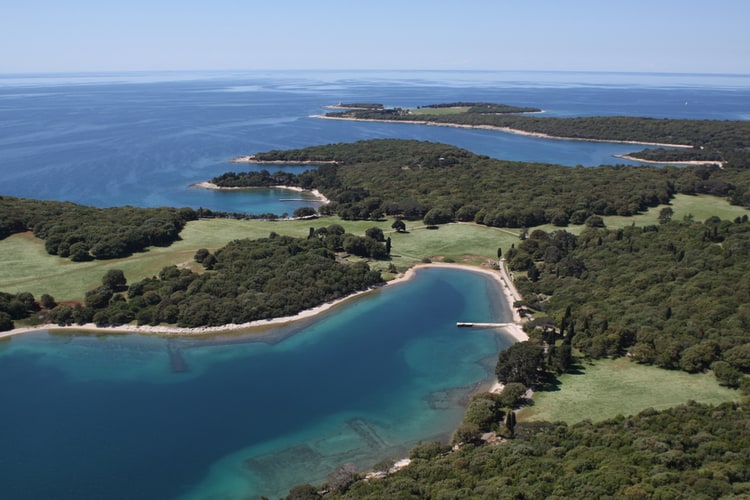 Plitvice Lakes National Park is Croatia’s oldest and largest national park. Officials designated the park in 1949 and later recognized as a UNESCO World Heritage Site. The national park, located in Central Croatia, is famous for the Plitvice Lakes waterfalls, and other natural scenery.

A majority of the nearly 300 square kilometers of the park area is forest. The region includes over 1,200 plant species and one of the few natural habitats to the rare European brown bears and grey wolves.

Day tours are available for visitors to explore the beauty of the Plitvice Lakes National Park. Trails lead up to the notable waterfalls – Veliki slap and Galovački buk. The park also includes 16 unique cascading lakes, formed naturally along the sloping landscape.

Plitvice Lakes National Park is one of the most visited parks in Croatia, receiving well over one million visitors every year. It’s also one of the best day trips from Zagreb. 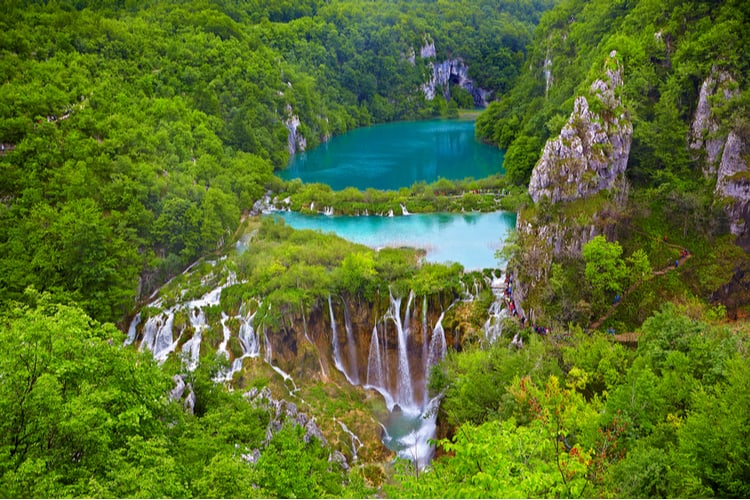 The Sjeverni Velebit National Park, or Northern Velebit National Park, covers a region in the northern part of the Velebit mountains, Croatia’s largest mountain range. The highest peak, Zavižan peak, reaches a height of 1,600-meters. Officials designated the park for the abundance of nature and are more designed for tourism than land preservation.

Sjeverni Velebit National Park includes many hiking and mountaineering trails that cross throughout the mountains. Visitors will arrive at viewpoints giving fantastic views over the landscape and towards the Adriatic Sea. The most popular trail is the Premužić’s Trail, a hike through the most scenic parts of the park.

Sights of the mountain’s endemic plant species are visible throughout the national park, which also is home to the Velebit Botany Garden. Most of the park is open to the public, with a few areas strictly designated for research or educational visits. 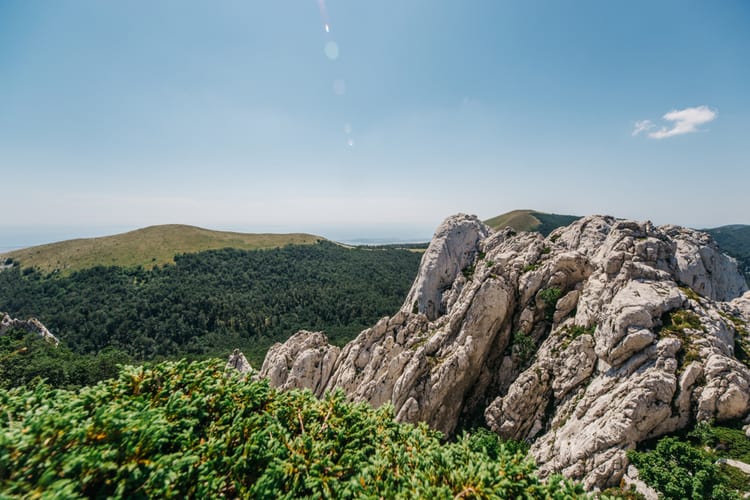 Paklenica National Park is a designated southern region of the Velebit Mountains, established in 1949, making it the second-oldest national park in Croatia. The main features of the park are two massive canyons, carved out by the Paklenica River – Velika Paklenica and Mala Paklenica.

The towering cliffs of the canyons in Paklenica National Park make it one of Europe’s best destinations for rock climbing. The most popular climb is to the top of Anica Kuk, providing a celebratory view overlooking the landscape.

Other favorite tourist activities in the park are biking and hiking trails, hundreds of kilometers of paths, each with varying levels of difficulty and length. The park also includes man-made caves, open to the public to explore.

Visitors can enjoy Paklenica National Park on half-day or full-day tours to visit the trails and viewpoints. There are also cabin accommodations available in the park for overnight stays. 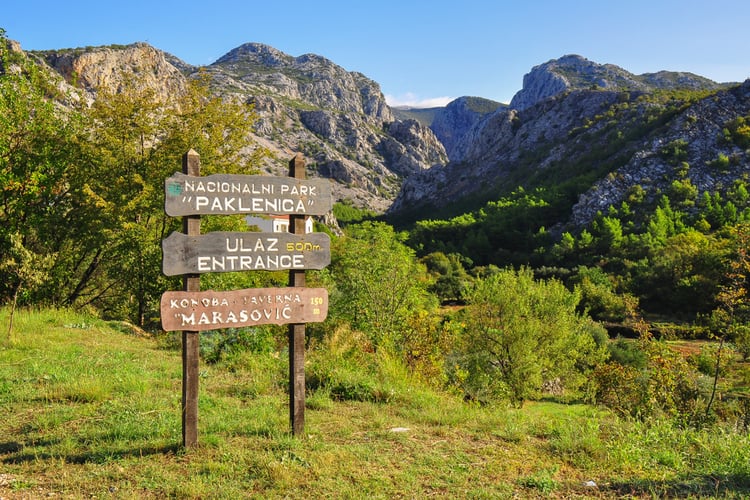 Krka National Park is a tourist favorite for the untouched natural beauty of the park. Krka National Park surrounds the Krka River, designated in 1985 for research, recreational activities, and cultural significance. It’s an excellent example of a preserved ecosystem, creating a region with abundant biodiversity.

Krka River is recognized as a natural landmark for the importance of the plant and animal life coexisting within the park. It’s home to over 800 plant species, including native species, and also native fish only found in the Krka River.

Krka National Park has several points of interest; the most popular is Skrandinski buk, a naturally formed pool with gently cascading waterfalls. Swimming is permitted in the clear waters. Visitors can also hike the trails to see archaeological sites – historical Roman fortresses left in ruins. 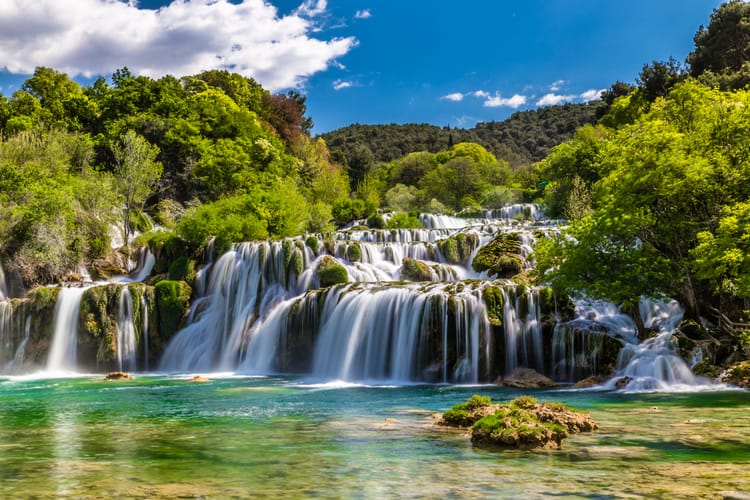 Kornati National Park is one of the most beautiful national parks in Croatia, often called a ‘nautical paradise.’ The Kornati is a group of more than 140 islands off the coast of Croatia, with more than two-thirds designated as national park status. The national park also includes the surrounding coral reefs, islets, and marine areas to protect the wildlife.

Kornati National Park primarily centers around Kornat Island, the largest island in the chain. It’s a popular destination for boat trips, fishing, and visiting the beach. Visitors can enjoy the island scenery while exploring clean beaches and clear, blue waters.

In addition to tourism, Kornati National Park is also a preserved habitat for wildlife and plants. Some of the most common wildlife see around the island are seagulls, butterflies, and ring snakes. The island also includes the Purara reserve. 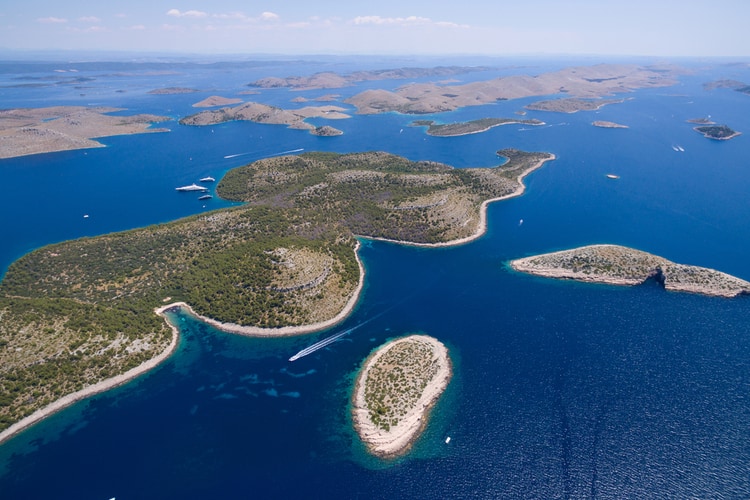 Visit Mijet National Park to experience a tranquil part of Croatian nature. Mijet National Park is located in the southeastern-most region of the Adriatic Islands, only accessible by ferry. The park includes several of the region’s islands and landmarks, including the Mijet Island, Mijet lakes, and the Veliki grad, the highest point in the park.

Mijet National Park is rich with natural landscapes, habited by just over 1,000 natives. The forest-covered island is an excellent destination for moderate hikes along the developed trails. Some of the sights include the Mijet Channel and a historic Benedictine Monastery.

Visitors are permitted to explore the park’s island via footpaths or bike rental available. Mijet National Park allows swimming in the warm waters of the lakes to cool off after a long hike. 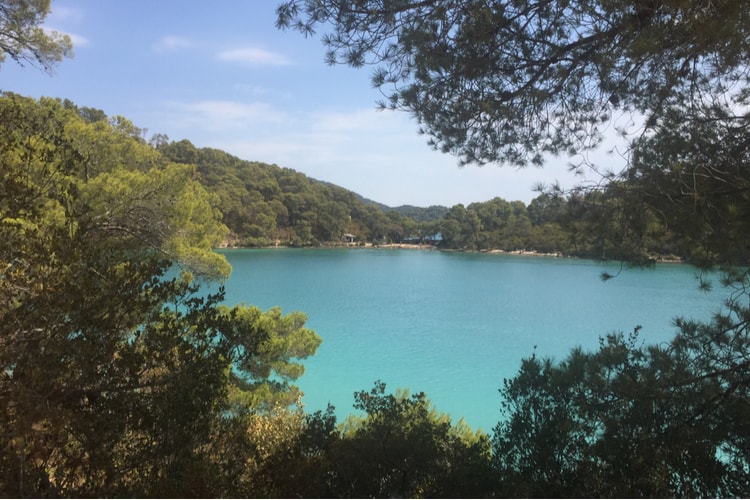 Which is the largest national park in Croatia?

The largest national park in Croatia is the Plitvice Lakes National Park, centrally located and covers an area of 296 square kilometers.

How many national parks are there in Croatia?

There are a total of eight national parks in Croatia that are officially recognized by the Croatian government.

Which is your favorite national park in Croatia? Leave a comment below!