Want to know more about Irish food? Here are 15 traditional dishes to treat yourself as well as more information about Irish cuisine.

Ireland is quite famous for its unique take on several foreign dishes which have now become a cultural phenomenon in their own right. Irish dishes are known for their simple but careful preparation, and Irish cuisine offers some of the healthiest and complete food options out there.

Irish Stew is a classic Irish dish. The original peasant dish of Ireland, the Irish Stew is a heavenly combination of your choice of vegetables, potatoes and the meat which is traditionally lamb. Beef is also a popular option.

A very popular special variation of the Irish Stew is when the chef decides to add the signature beer of Ireland, the Guinness. Both versions are delightful, and there are even various family recipes around the country. 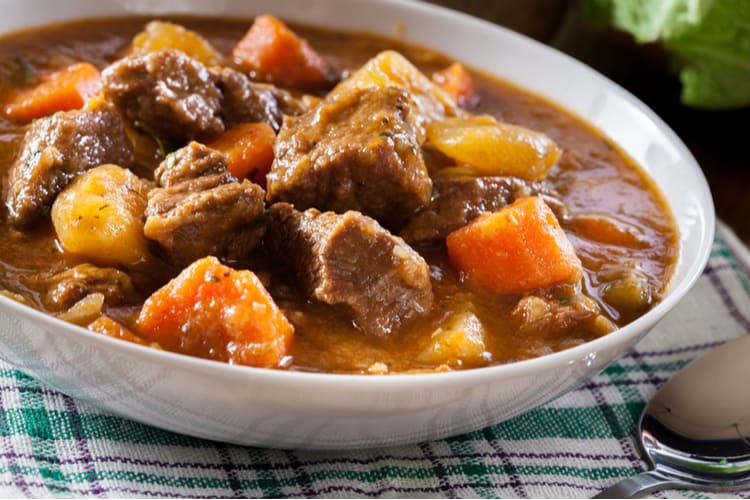 Coddle gets its name from the process which means slow cooking. Coddle is a hearty dish comprising of slices of sausages that are stewed for several hours on a really low fire alongside an assortment of ingredients.

The additional items usually include bacon, sliced onions and potatoes. The unmistakable aroma is a sign that the coddle is ready to go. Coddle is traditionally served with Soda bread that will be introduced in short as well. 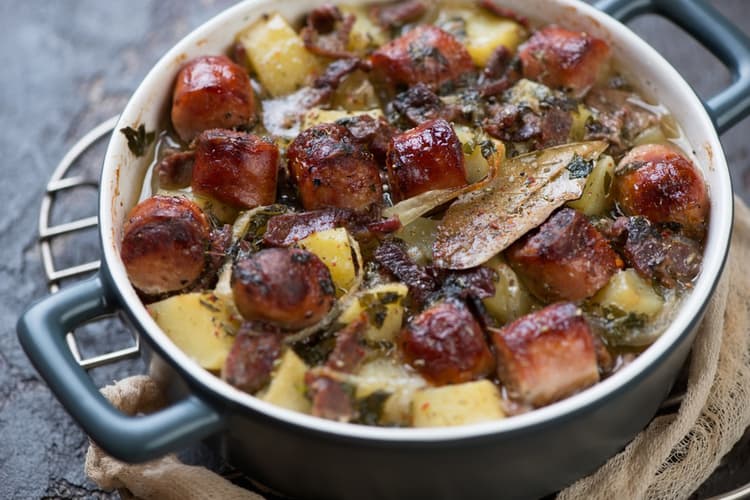 Is it a pancake or a cutlet? Boxty is a delightful snack or side dish of potato-based pancakes with a very simple recipe. You just combine grated raw potatoes and mashed potatoes and mix them with salt, flour and some mild seasonings of your choice.

The mixture is then used to form round pancakes that are boiled to ensure they hold together and then fried in butter and served hot. An alternative is to bake thin, sliced pieces in the oven but the former is more common. 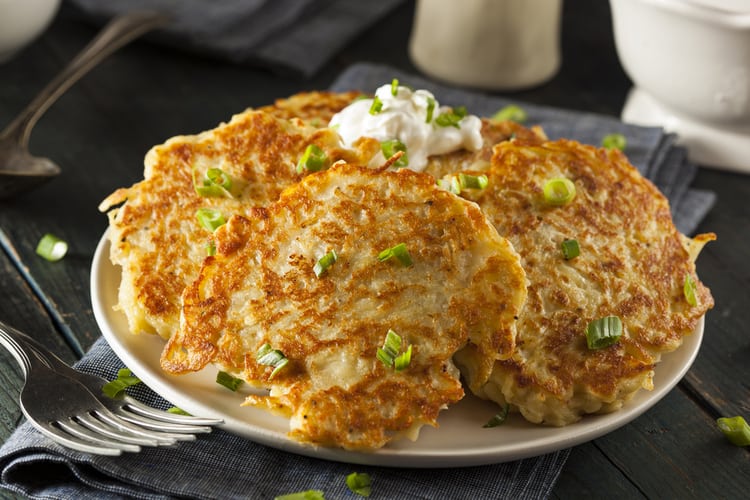 The unsung hero of Irish cuisine, soda bread is a common sight in most Irish dining tables. In fact, legend has it that every Irish family has their own recipe for soda bread with some turning out to be sweet while others come with a drier taste albeit with dried fruits added to the mix.

The base ingredients remain unchanged with only coarse flour, buttermilk and bread soda coming into the foray for a simple classic soda bread. However, oats, honey and even butter and jam versions are widely available around the country for you to try. 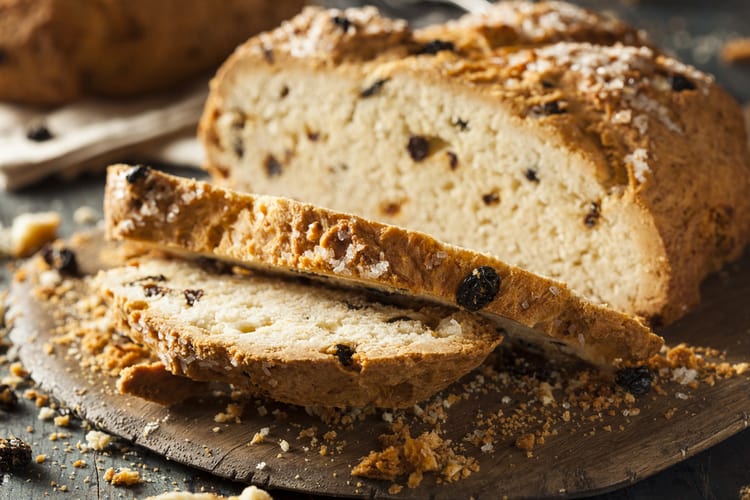 Barmbrack or Barm Brack is the second most well-known type of bread in Ireland. Famous for its undeniable status as a Halloween specialty, Barm Brack is half bread and nearly all of the remaining half comprising of raisins. It makes for a very rich and filling snack.

Around Halloween time, the raisins are often replaced with other edible (and non-edible!) items such as peas (you’re not getting married in the year you get peas in your barmbrack) or small coins (meaning you will get rich soon). Many other articles have different meanings and it’s fun to explore the Irish culture through this simple confection. 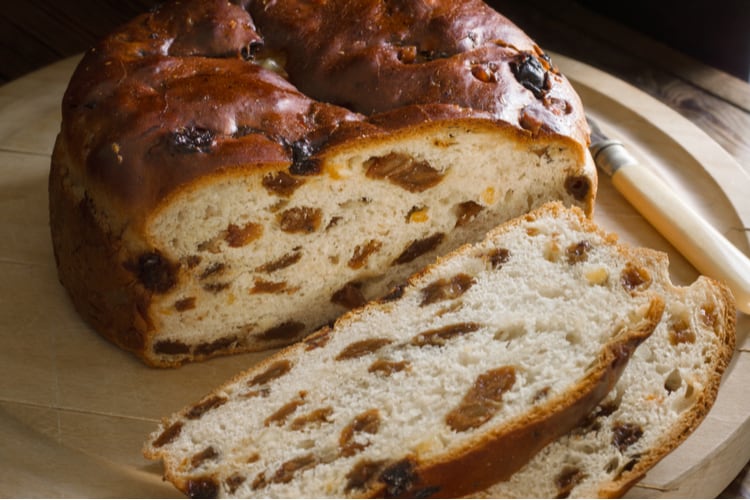 A seasonal specialty, salmon is considered a rare delicacy. Usually available in select locations only from April to June season, smoked salmon is served with potatoes and white sauce or with bread and scrambled eggs. You could also order a salad on the side. The dish is relatively expensive due to its rarity but it’s totally worth it.

Colcannon brings the staple of Irish diet to the foray. We’re talking about mashed potatoes here and colcannon is simply a classic and comforting mix of mashed potatoes, cabbage, butter and a dash of spring onions for flavor.

Another popular variation is called Champ which adds milk to make the dish even more creamy and smooth so you can enjoy it to your preference. Both versions are delightful and worth trying. 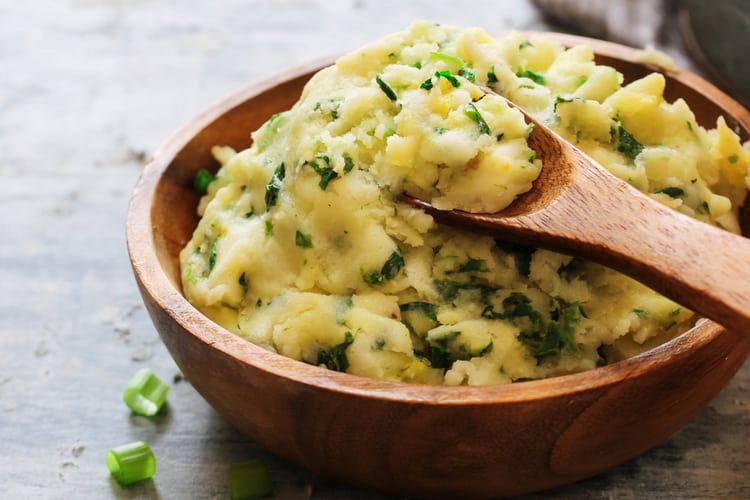 Black pudding is quite famous around the world as a breakfast item or just a regular favorite snack. Made from pork meat, fat, blood, barley, oatmeal and suet, it’s an old favorite for many people.

The Irish love the black pudding’s lesser-known cousin, the White pudding, just as much. White pudding is basically the same as black pudding with only blood removed from the equation to give it a lighter color and a somewhat different taste. A traditional Irish breakfast is considered incomplete without a slice of each so make sure you try and pick your favorite. 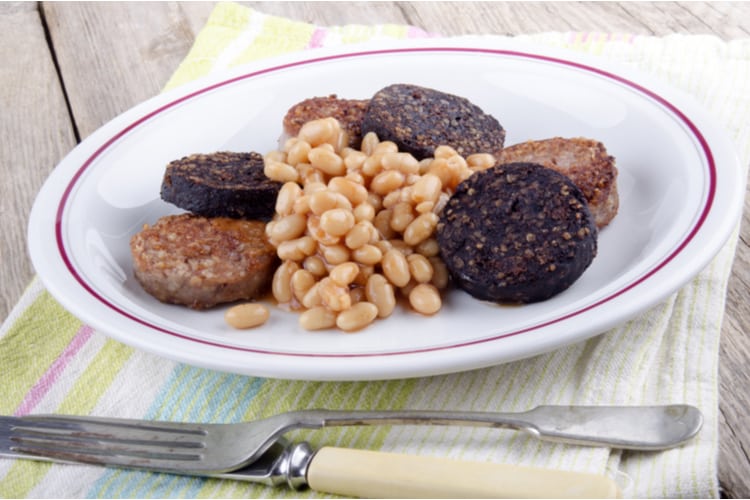 Irish native Oysters are famous. Fresh native oysters are usually available right after the summer is waning. The oysters are typically served with a special red sauce.

When available, this particular kind is so in demand that the Galway Oyster Festival is organized every year in September to bring all the oyster lovers together. 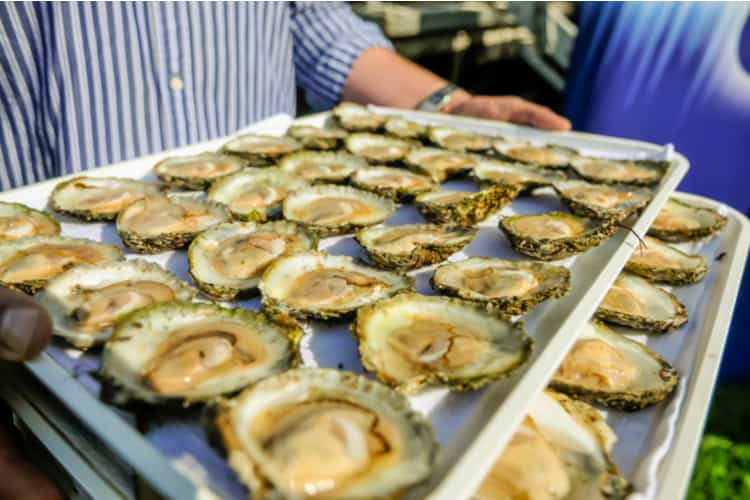 As a simple dish, boiled bacon and cabbage alongside boiled or mashed potatoes form an undisputed family favorite combination. Salted pork is usually cut from the pig’s shoulder or back and soaked overnight for a set number of hours to desalt the meat accordingly before its boiled.

Cabbage is added a few minutes before being served so that it doesn’t go stale. It’s very difficult to go wrong with this trustworthy classic. 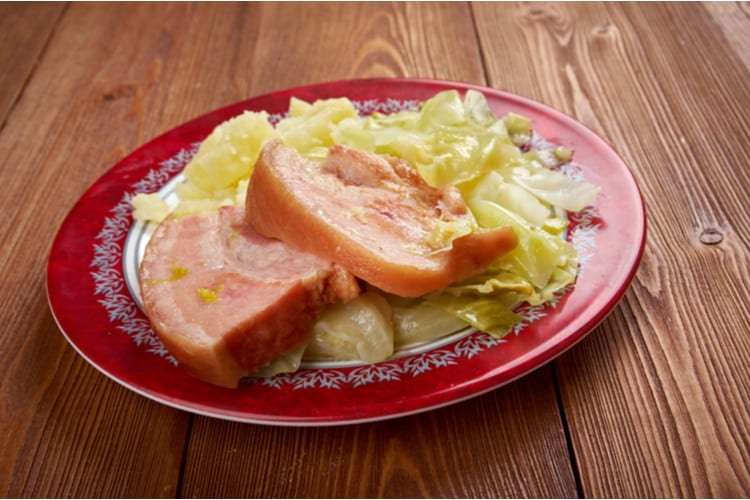 Chicken fillet roll is your bang for the buck food item. It is widely available at convenience stores and deli corners all over the country and is pretty much the best value for money if you’re on the budget.

A filling on-the-go snack, the chicken fillet roll is especially popular among the students who are generally short on time and quite often on a budget. Healthy, filling and easy on the pocket; what more could you ask from a traditional after-hours snack?

While the Irish have borrowed much from the English such as a love for chips, they have given this classic favorite a makeover which we love even more. Presenting garlic cheesy chips and taco cheese chips as two primary examples of an experiment that are pretty much self-explanatory. If you are looking for an indulgence, your search ends here.

The second type of shellfish on this list and with good reason, Cockles and mussels can be found in virtually any traditional restaurant across the country. The shellfish is best enjoyed when steamed and served with chips. Irish shellfish is world-renowned. 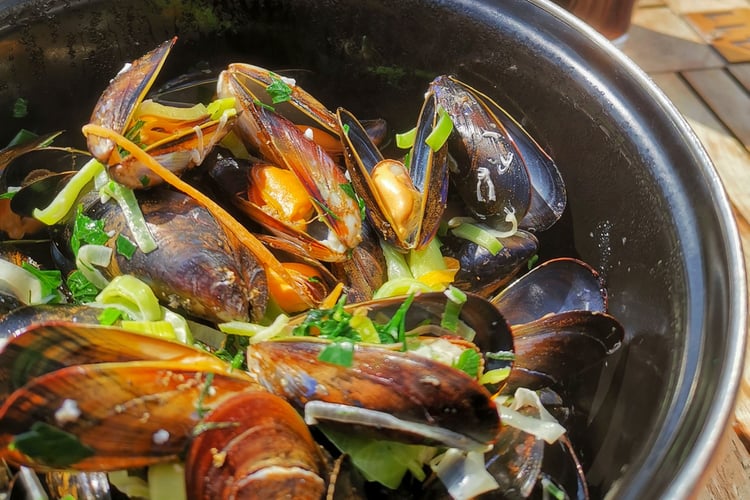 Ulster Fry or The Full Irish

The Full Irish is the most popular breakfast dish in the country. Usually served with slices of soda or potato bread, this hearty meal is also called Ulster fry as it is centered around Ulster. It consists of soda farl, bacon, eggs, and fried sausages.

Other common toppings include mushrooms and fried onions. There are multiple other variations and it is recommended that you try several of them on your travels to Ireland for a unique breakfast every single morning. 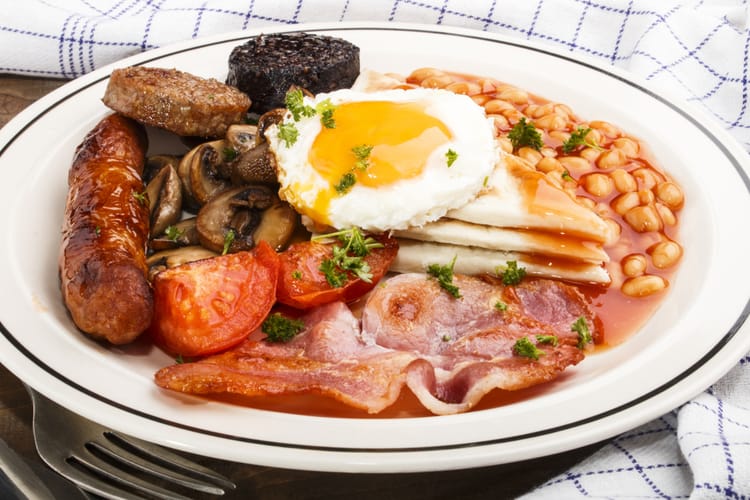 Carvery is a grand roast dinner which is served in a buffet-style where you have to actually line up for your turn. All part of the experience, you first choose your own choice of roast meat before progressing to the potatoes section which can be served roasted or mashed. Surprisingly, the chefs will be happy to give you both with the only catch being you need to ask nicely.

You will then progress to the vegetable section and then top it up with some delicious choice of gravy. The portions are usually quite large, so make sure to come with an empty stomach.

More about Food in Ireland

Irish cuisine is well-known around the world for its unique cooking style. The traditions and recipes are household favorites even outside the country.

A typical Irish meal would consist of some kind of meat (mainly lamb or beef), the always present potatoes (mashed, boiled, grated or just as chips) and fresh vegetables which can be boiled, added to the stew or served on the side.

Apart from all that, the local beer and liquor is a very popular part of the food culture with Guinness being the undisputed local beer champion out of all brands. 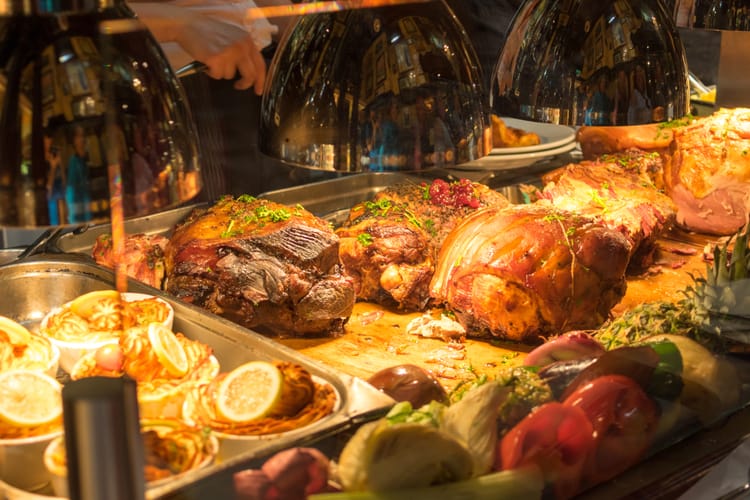 What do Irish eat for breakfast?

The Full Irish or the Ulster Fry is the most popular breakfast in the country comprising of generous portions of bacon, eggs and Ulster among other items. Other options for breakfast include the usual English breakfast of bread, eggs, and spreads.

Why is Ireland famous for food?

Irish food is simple yet hearty and flavourful. It’s a unique combination of various ingredients with special emphasis on the quality of ingredients.

Is Irish food healthy or unhealthy?

Irish food is generally quite healthy for the simple reason that they eat a lot of meat, vegetables, seafood, and dairy. They like to use fresh ingredients and are generally not very fond of spices.

What is the most important meal of the day in Ireland?

The breakfast is the most important meal in Ireland. The Irish love a heavy breakfast as is evident by the meal synonymous with the country’s name, the Full Irish.

What is the national dish of Ireland?

Irish Stew is the undisputed national dish of Ireland. It is a thick hearty stew of meat, potatoes, and onions.