Want to know more about Filipino food? Here are 15 traditional dishes to treat yourself as well as more information about Filipino cuisine and what makes it so special.

The Philippines is home to people who love to celebrate food. Filipino cuisine is an integral part of the culture and Filipinos are some of the most hospitable people in the world.

With a myriad of cultural influences incorporated into its food, Philippines boasts many exotic dishes as part of their cuisine borrowed from Spanish, American, Malaysian and Chinese cultures incorporated into the food scene. In this article, we look at a selection of famous food items that you must try from the fabulous Philippines.

Eating the local Filipino food is one of the best things you can do in Manila as well as other major cities in the Philippines.

A popular Filipino dish as well as a cooking technique, adobo consists of meat such as chicken and pork that is marinated in a mixture of soy sauce, vinegar, garlic, black pepper and other spices and is simmered until it turns a distinctive golden brown.

Adobo is often used to cook seafood and vegetables as well as using the same technique. It is often served with plain white rice as a staple. With a notably unique taste thanks to its different ingredients, adobo combines salty, sour and sweet flavors into one serene combination that is guaranteed to become your favorite. 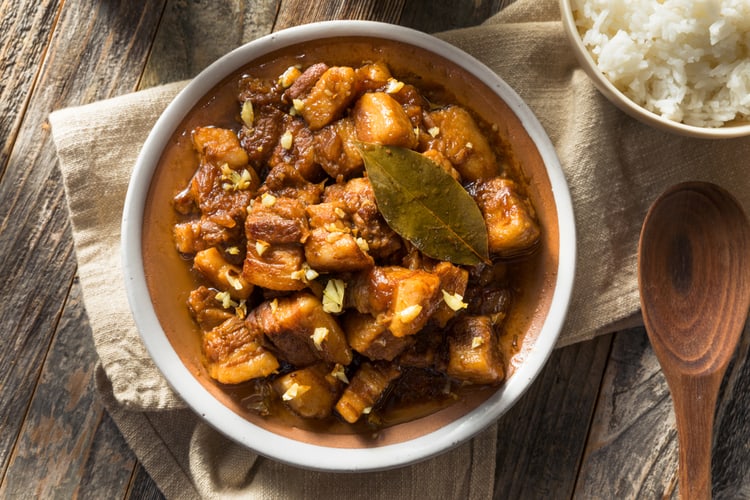 A rich Filipino stew with a thick and savory peanut sauce base, Kare-Kare is made of oxtail and vegetables such as eggplants, Chinese cabbage, green beans, okra and onions. Other cuts and types of meat may also be used such as beef or pork.

The sauce is made of peanut butter, roasted peanuts, garlic and onions. This hearty stew is often served hot with white rice and a side of shrimp paste called bagoong. 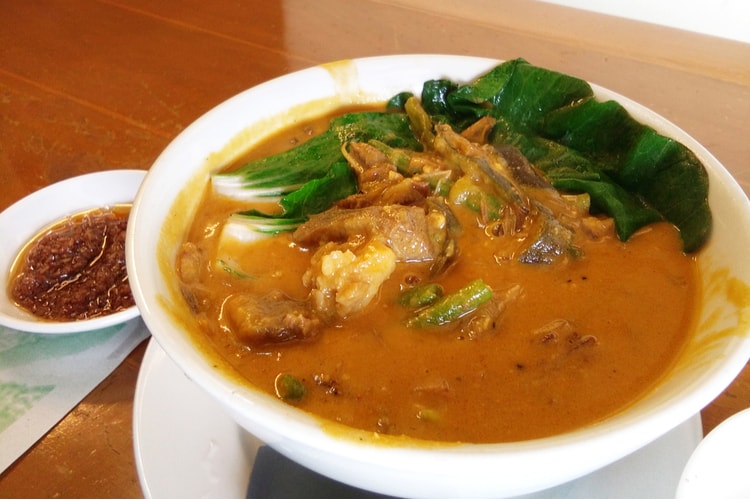 Pancit are Filipino style noodles that come in many different varieties. A very popular kind is the Pancit guisado which is often served at Filipino birthdays as it is considered a symbol for a long life.

It is made of very thin rice noodles that are sautéed adobo-style in a mixture of soy sauce, vegetables, sliced meat or seafood. The noodles are often served with a sprinkle of lime juice and hard-boiled eggs to complete the dish. 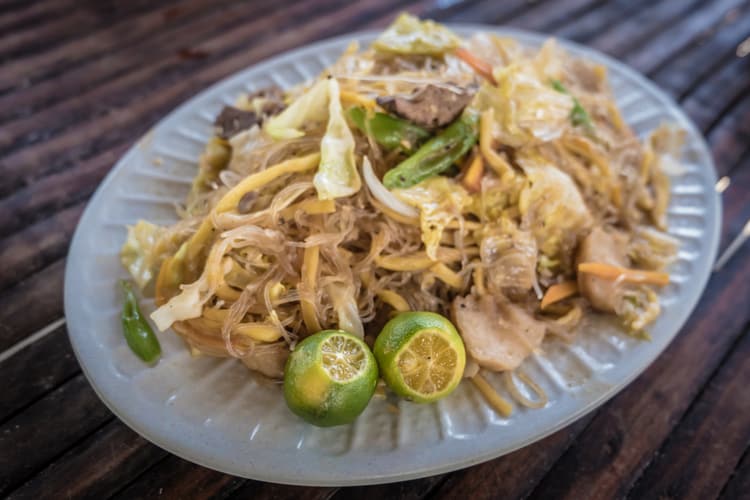 Lumpias is a spring roll that is very popular in the Philippines. They are often served as appetizers or snacks sold as street food. With a wide variety of ingredients and fillings, lumpia can have a multitude of flavors.

Some common ingredients include chopped vegetables such as carrots, green beans, leeks and bamboo shoots as well as minced meats like chicken, shrimp, beef or pork. They can be served deep-fried or fresh and are accompanied with a special dipping sauce that depends on the kind of lumpia you order. 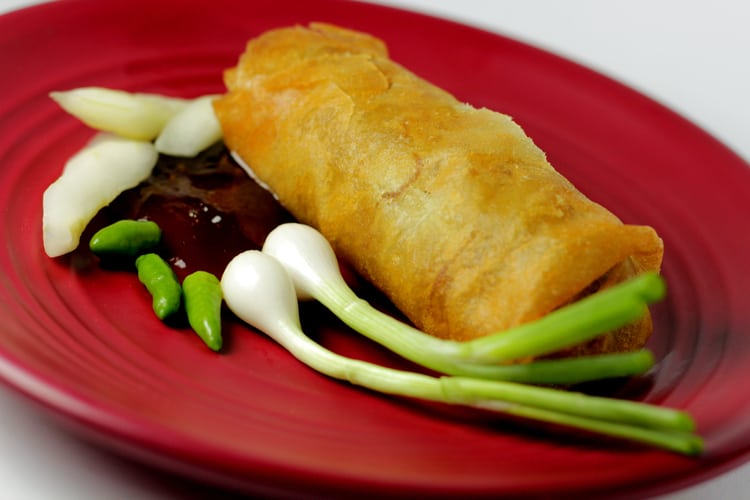 A raw seafood dish that is similar to the Peruvian ceviche, Kinilaw is made by chopping up fish into cubes and mixing with vinegar to denature and cure the raw fish.

Calamansi, ginger, onions and chili peppers are then added to the dish and it is seasoned with salt and pepper. It is usually served as an appetizer before the main course or as a snack. Other varieties of seafood, such as shrimp, crabs, oysters and squid, may be used as well to replace fish and add a unique touch to this amazing dish. 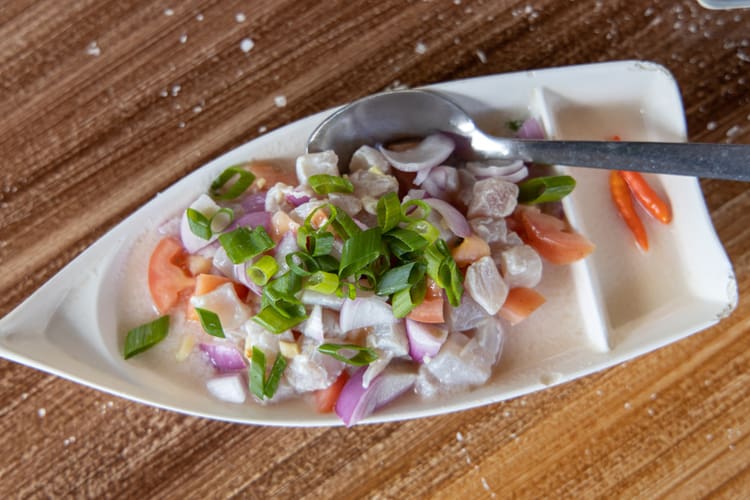 Inasal is a flavourful grilled chicken dish that consists of a special marinade made from coconut vinegar, ginger, lemongrass and calamansi. With a mouth-watering crispy golden-brown skin that is formed from annatto oil, this dish tastes every bit as good as it looks. It is served with garlic rice over which the annatto oil is poured. 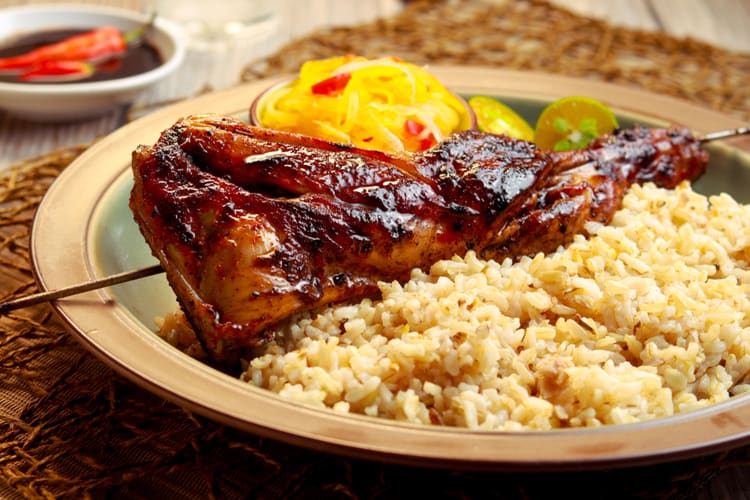 A dish made from parts of pig head that are strategically and carefully chopped, sisig demonstrates that nothing is wasted in Filipino cuisine as pig heads were not usually used in cooking prior to its invention.

The pig head is first boiled to tenderize it and then chopped up into small pieces to be grilled or broiled. Coarsely chopped onions are then added to the meat. It is served hot on a sizzling plate along with fried rice. 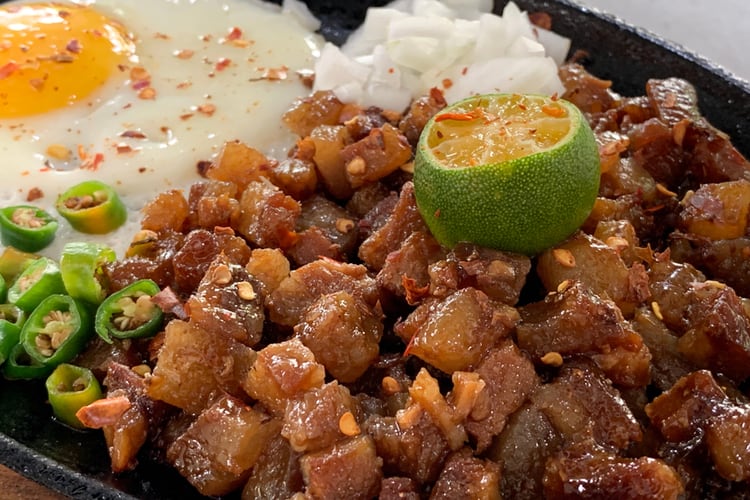 An entire suckling pig that is spit-roasted over charcoal, Lechon is a grand dish that is commonly seen on special occasions and family get-togethers. The pig is stuffed with pepper, spring onions, lemongrass, laurel leaves, star anise and scallions.

Salt and spices are rubbed onto the skin to make it crispier and the pig is manually turned for several hours to be roasted on all sides. Due to the spices and herbs that are stuffed and rubbed into the pig, lechon is served with little to no sauce and is eaten straight by hand. 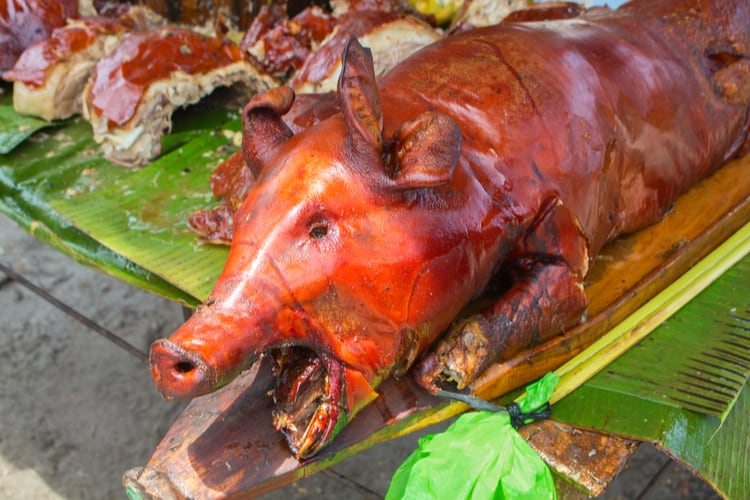 A popular Filipino stew that is made from tamarind, Sinigang is a delicious sour broth that consists of vegetables and a single type of meat chosen from fish, prawns, pork, chicken or beef.

The vegetables used can include tomatoes, garlic, onions, okra, water spinach, eggplant and more. It has a sour and savory taste with a tanginess that comes from the tamarind used. 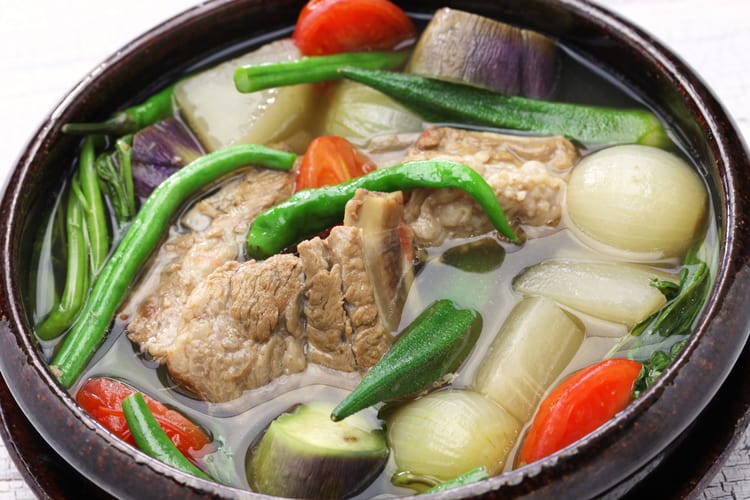 The Filipino beefsteak is made by thinly slicing choice cuts of beef such as the sirloin and then marinating them in a special combination of soy sauce, calamansi, garlic and onions.

The onions are added as rings and then cooked until they soften and caramelize with a golden-brown color. The various flavors from the soy sauce and onions are absorbed into the beef making a tasty combination of sweet, sour and savory flavors.

Dinuguan is a savory Filipino stew that is translated as “pork blood stew”. Don’t let the name frighten you though. It is made from pork offal, organs such as the lungs, kidneys and heart.

The meat is simmered in a rich gravy that consists of pig blood, garlic, chillies and vinegar. The gravy is spicy and thick lending a strong meaty taste as the offal is cooked in it.

Dinuguan is usually served with white rice or steamed rice cakes called puto. A hearty meal, often quite literally, Dinuguan is a dish those feeling adventurous should definitely try. 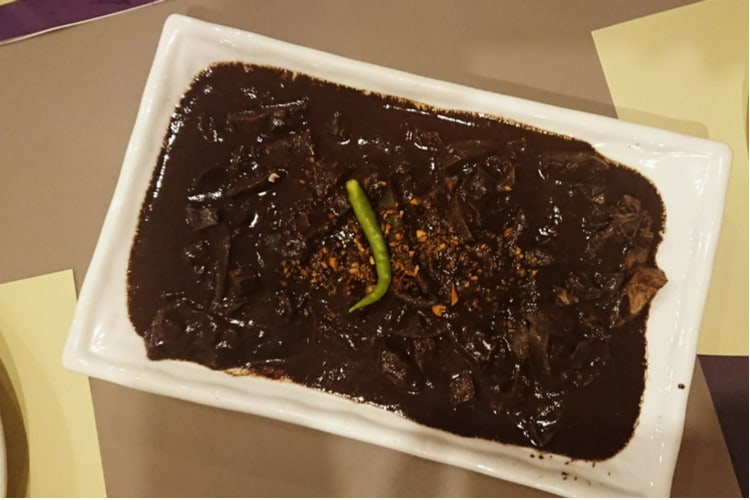 A vegetable stew made from calabaza in coconut milk and cream. It is usually made with shrimp but crab, fish, chicken and other meats can be substituted as well.

The vegetables include ginger, onions, garlic, asparagus beans, eggplants and many other options. The coconut milk and cream that forms the base of the stew gives it a rich and creamy texture.

And it absorbs the flavors of the vegetables and the meat very well, resulting in a very satisfying savory taste with a tinge of sweetness due to the calabaza. 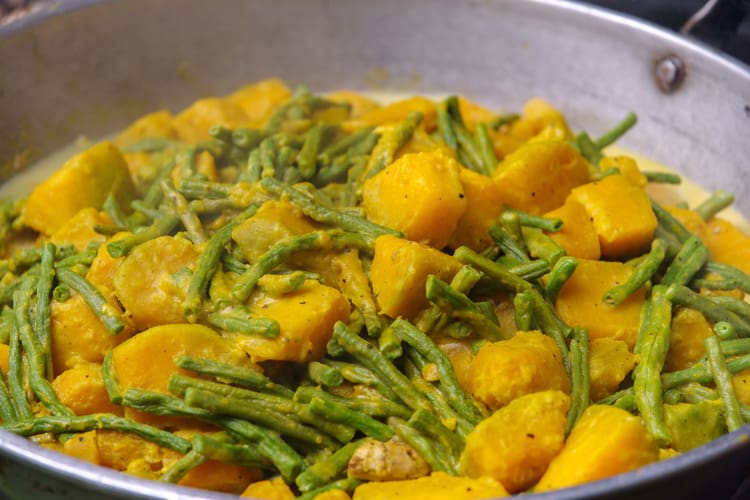 Kaldereta is a hearty goat meat stew that is commonly served at parties or special occasions. Variations that replace the goat meat with pork, beef or chicken exist as well but are not as common.

The meat is first stewed in a mixture of vegetables and liver paste. The vegetables include tomatoes, onions, garlic, potatoes, olives, bell peppers, hot peppers, peas and carrots.

The liver paste serves to thicken up the consistency of the stew and improves its diverse flavors. Furthermore, the peppers add in a spicy kick that takes the whole dish to the next level. It is usually served with rice or bread and is a popular local favorite. 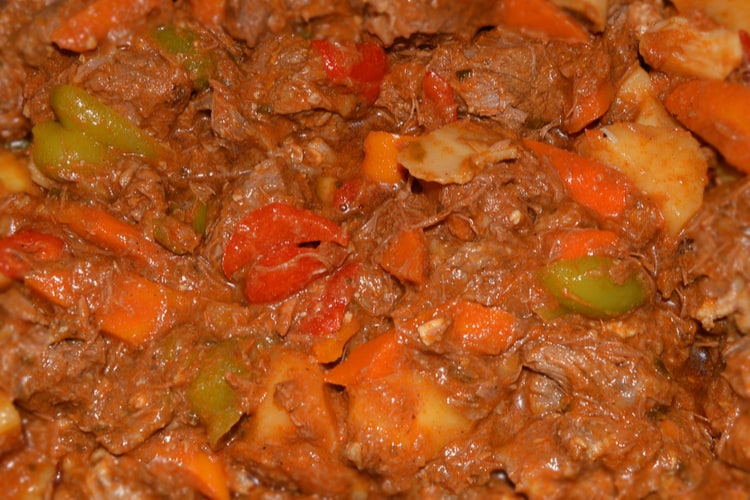 Arroz caldo is a popular breakfast meal and comfort food in the Philippines. It is a rice dish consisting of rice and chicken. The chicken is first cooked in a broth with a large amount of ginger.

The chicken is then shredded once it has softened. The shredded chicken is added to the rice as the rice is being boiled, along with some saffron that gives it its distinctive yellow color.

It is served in bowls with garnishing of toasted garlic, chopped scallions and black pepper. This dish is served hot and can be eaten, though you will find it common to drink it like soup as well. 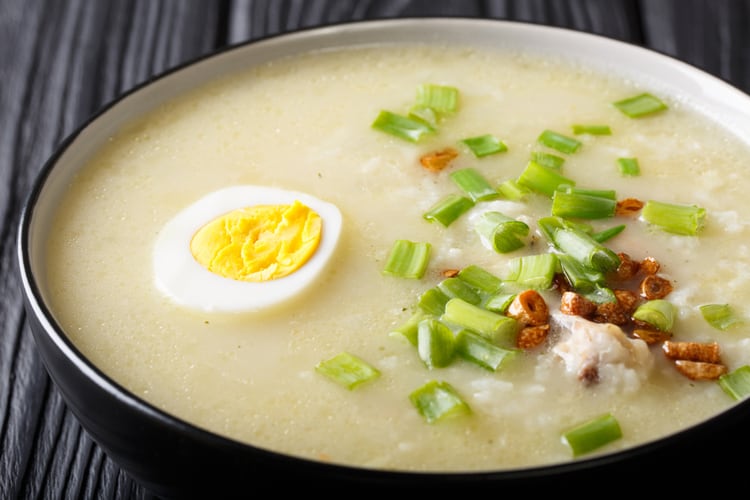 A popular Filipino frozen dessert, Halo-halo can be translated as mixed or mix-mix, as that is what this concoction is. Halo-halo is made of finely shaved ice, evaporated milk, sugar and lots of other ingredients that can be added optionally per personal preference.

Some of these include coconut strips, mashed purple yams, caramel custard, jackfruits, red beans, tapioca, bananas and many more. It is topped off with a scoop of ice cream usually and is perfect for cooling off in the hot Philippines weather. 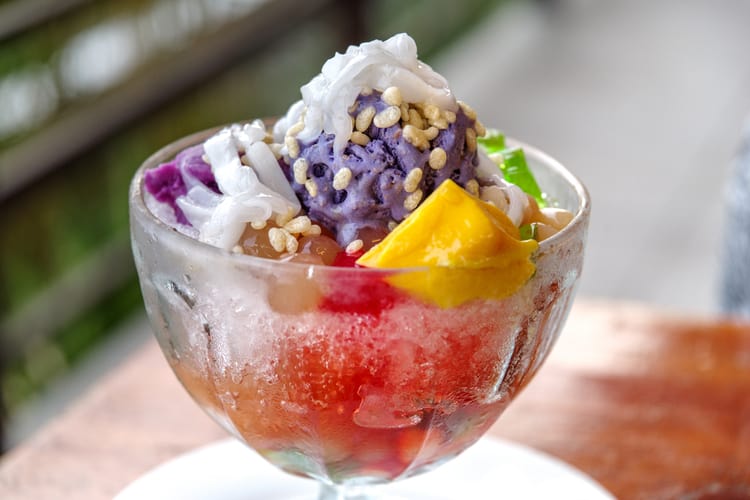 More About Food in Philippines

Filipino food is centered around the combination of different flavors such as sour, sweet and salty into a unique combination that complements each ingredient.

Dishes can range from very simple foods that make you feel at home like the Arroz Caldo to very complex ones that are prepared for fiestas and festivities like the Lechon. Common ingredients that are frequently used in many Filipino dishes include rice, noodles, meat, vegetables, and seafood.

A variety of fruits are also used in cooking such as plantains and coconut products. Vinegar and soy sauce are also used in many dishes, contributing to the counterpoint aspect of the cuisine. Cooking and eating have always been a communal activity in traditional Filipino culture, based around the family kitchen.

What do Filipinos eat for breakfast?

Some popular foods for breakfast include arroz caldo which is a rice dish served with chicken. This is by far the most popular item consumed widely throughout the Philippines. The western breakfast of eggs, bread and spreads is also quite commonplace in the modern urban areas of the Philippines.

What is the national dish of Philippines?

Lechon is widely regarded as the national dish of the Philippines.

Why is Philippines famous for food?

Filipino cuisine is especially famous for its variety and rare delicacies. Filipino food is arguably the best example of “East meets West” cuisine in the whole world incorporating a wide variety of cultural influences in the local cuisine.

What is an interesting fact about food from Philippines?

Counterpoint is a term that is used to describe a feature in Filipino cuisine of pairing opposite flavors together to heighten and contrast the taste. An example is the savory stew dinuguan that is paired with the sweet rice cake puto.

Do you have more questions about food from the Philippines? Leave a comment below!