Want to know more about Traditional Colombian food? Here are 15 dishes from Colombia that you should try while visiting as well as more information about Colombian cuisine.

There’s a bunch of interesting dishes to eat in Colombia and each region often have their own specialties, and even some cities will have special dishes that they are famous for. The Colombian kitchen is rich and diverse, just like its people, animals, and nature.

Bandeja paisa requires a great deal of preparation and includes selecting the right choice of items in the right proportions. The chef ensures that the choice plantains are ripe with very few yellow spots and black in color. The serving amount is quite generous and we recommend sharing one dish between two people so you could try other items on the menu as well. 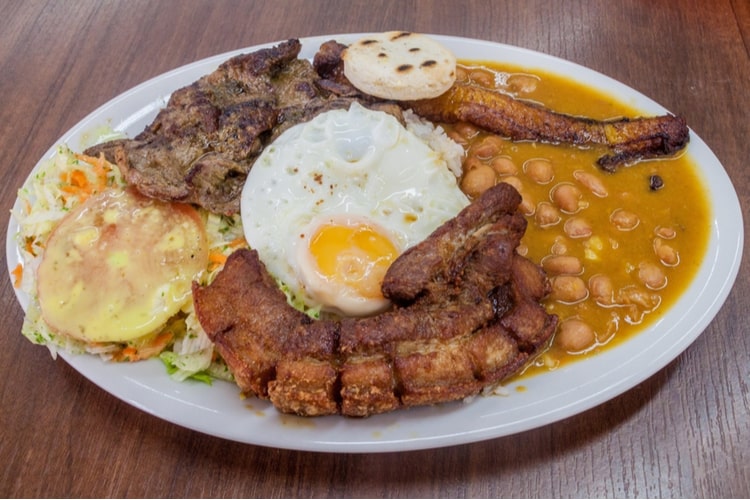 If you are in the country’s capital, Bogota, be sure to try ajiaco, which is a traditional Colombian soup. The sizzling soup contains three kinds of potatoes (criolla, pastusa, and sabanera) that are cooked in a light broth with corn, onions, cilantro, garlic, and green onions.

Before starting, don’t forget to scrape all the corn and mix the rice into the soup for an authentic experience. The dish is a favorite when the weather is warm so be sure to try this during the summer. 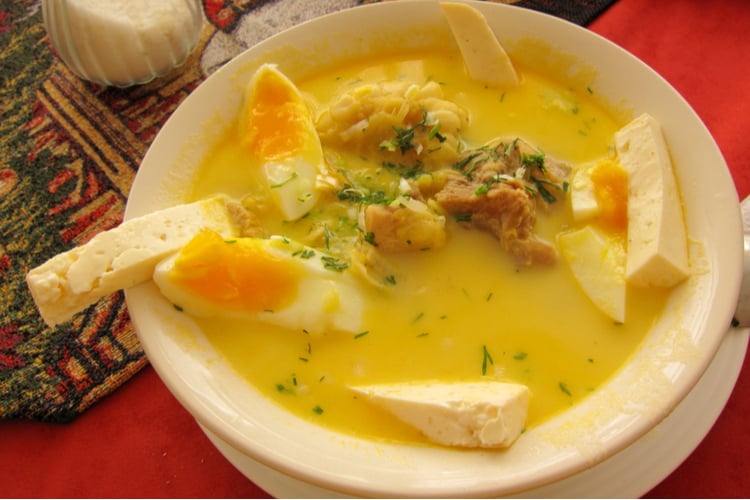 This dish is mostly famous in Tolima region of the country. The chief ingredient in the dish is a roasted pig accompanied by green onions, yellow peas and rice.

The mixture is slowly cooked in a brick oven for up to 12 hours and it is common to find this delicious dish in parties or events. You will definitely enjoy the crispy skin and the feeling of tender meat melting in your mouth is out of this world. Lechona is traditionally paired with arepas but you can definitely enjoy it on its own. 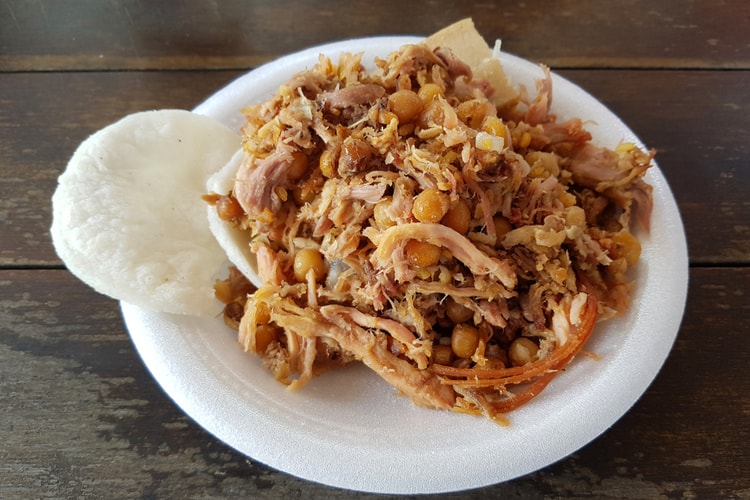 A good breakfast brings a positive start to the day and changua is the primary choice when it comes to a Colombian breakfast. It is a healthy milk-based soup that is mixed with coriander, onions and egg.

Pasteleria Florida is a famous 80-year-old bakery in the country’s capital which serves one of the best soups in town. If you have been partying the night before, this healthy breakfast can help to manage your hangover as well. 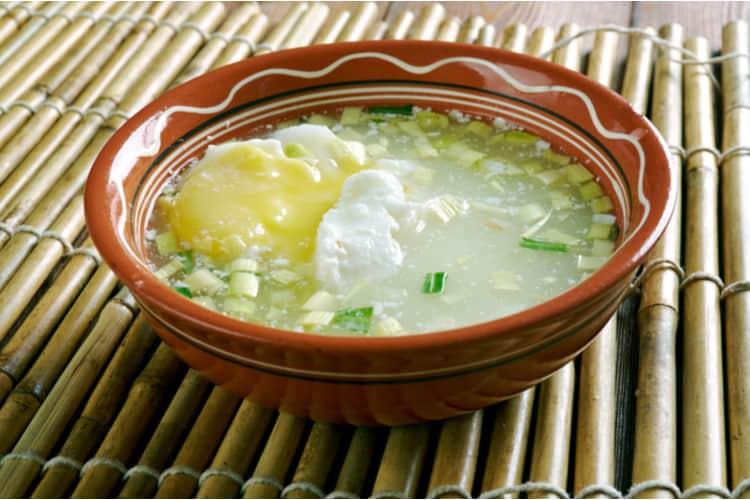 Tamales is another example of a Colombian dish which is famous for its the unique method of preparation. It is made from dough made of rice or corn, masa, yellow peas, vegetables and a meat of your choice of pork, chick or beef.

It’s a great street food that can be found all over Latin America, and Colombian tamales come in various styles. However, all of them are wrapped in banana leaves. 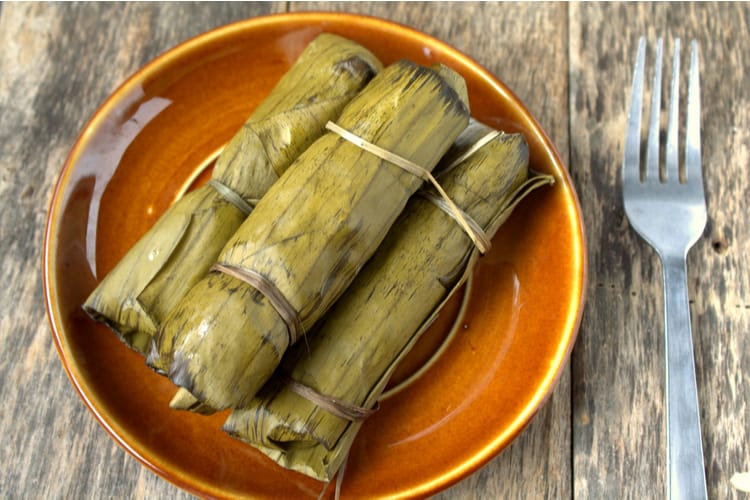 Fritanga is a generic name given to a fried food platter in Colombia. It combines several popular fried dishes into a single serving on a large plate or a basket that is shared between friends and family.

It’s a common sight in different social events around the country and the large variety of items in the dish includes pork cracklings, chicken, blood sausage and beef along with plantain, corn, and arepas. 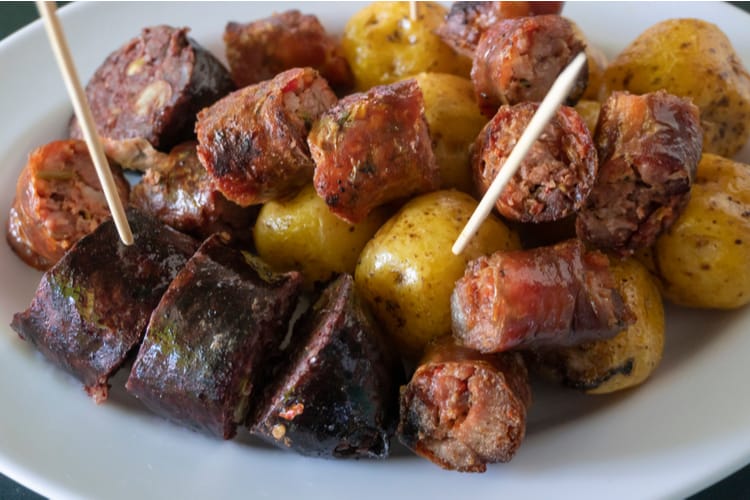 As far as delicacies go, Colombians roast some of the best insects in the world. Hormigas culonas is a traditional dish mostly found in the Santander region and the ants used in this dish are larger than the size of normal ants.

The ants can either be fried or roasted along with some topping and salt for taste. The reason why this is a traditional dish is due to the local belief that the ants have aphrodisiacal characteristics. 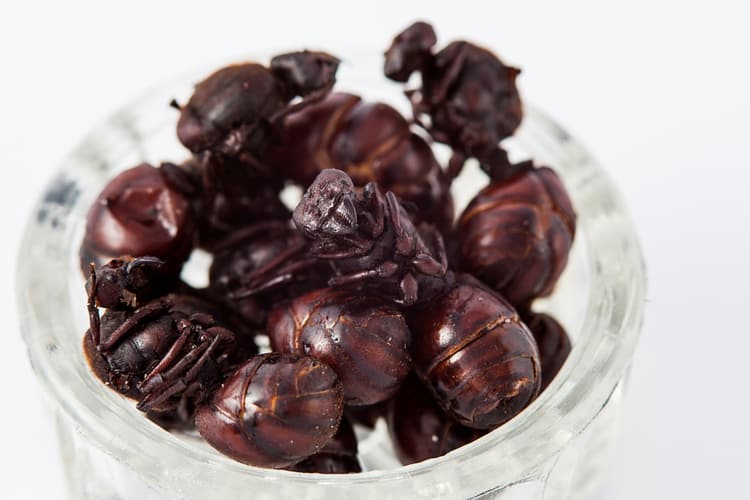 Pandebono is a special kind of bread that was actually invented in Colombia’s region of Valle Del Cauca. The main ingredients used in preparing this delicious bread are egg, cornflour, cheese, and yucca starch.

The delicious combination of bread and the guava paste also packs a punch of health benefits. It tastes great when it is eaten fresh out of the oven, and you can also stock them up for a safe on the go snack during your historical site visits. 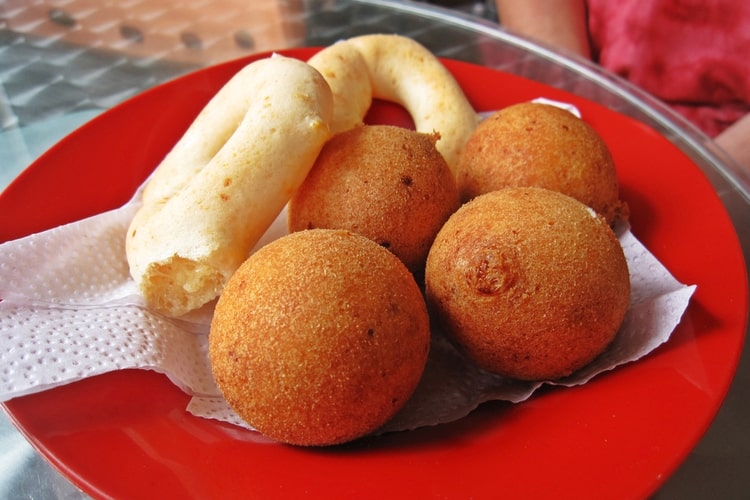 Arroz de Lisa is a dish commonly found near the Atlantic coast region. The main ingredients of Arroz de Lisa contains coconut rice, vegetables, fish, aji, and onions. It is traditionally served with chives and avocados on a leaf.

Aji Picante is a classic salsa originally from the Antioquia region. Most restaurants in Colombia have their own homemade version of Aji Picante and there are also some versions available in the supermarkets. Its’a spicy sauce that is made from chopped tomatoes, coriander, onions, aji pepper, and water.

An old traditional dish, aborrajado is basically a simple dish of fried sweet plantains filled with cheese. Not only can this dish be ordered as an appetizer, but it can also be served as a dessert because of its characteristic sweet and savory taste.

The plantain slices are filled with cheese before they are coated with the special batter and then fried to perfection. 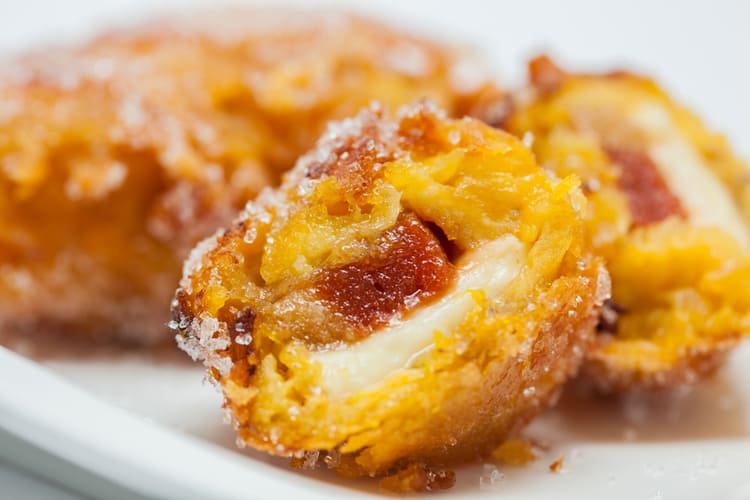 Cuchuco is a hearty soup that contains garlic, corn, cilantro, mashed beans, potatoes, and carrots. It is quite popular and common as a street food item as well so you can easily find it inexpensively in restaurants or at roadside stalls all over the country. 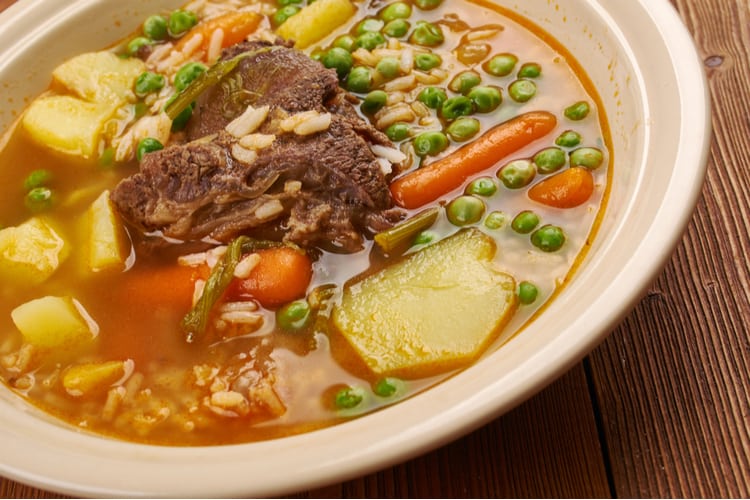 Empanadas are commonly found all over Latin America just like tamales, and the Colombian empanadas are traditionally made with shredded beef or pork served with aji and lime on the side. However, there are several versions that can be found all over the country.

Empanadas contain vegetables, rice, potato, meat and eggs and the dish is fried and served fresh for you to enjoy. It’s a great street food that can be found in restaurants as well as roadside stalls. 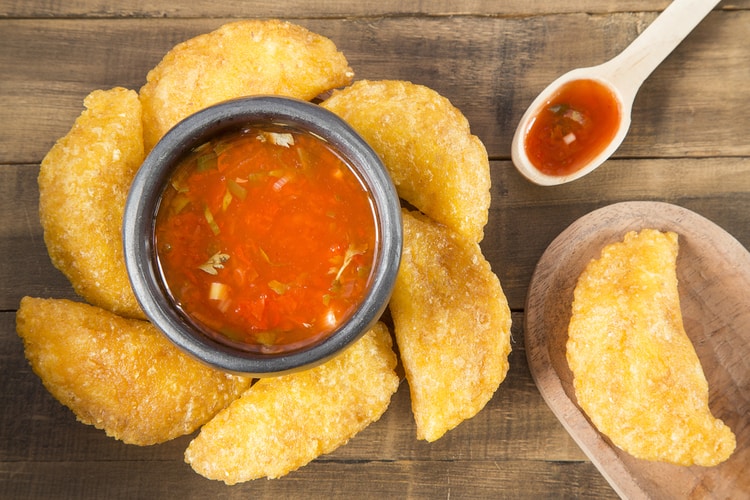 Bunuelos is a specialty breakfast item especially famous during the holiday and festive seasons. The morsels are delicious when served hot and are made of white cheese and salty flour. They are made in the shape of a golf ball and fried until the color turns golden brown.

The dish is especially famous in Medellin so if you’re lucky to visit the city, this could be the perfect on-the-go snack for you. It is quite popular all over the country for breakfast though.

More About Food in Colombia

Situated thousands of miles on the coastlines to the west and north, Colombia possesses a great variety of natural ingredients. This makes Colombia’s cuisine very unique and diverse.

Most of the dishes are not spicy, but earthy flavors can be added with the different kinds of traditional sauces that are prepared to complement the dishes. Colombian food is typically rich in carbohydrates and lunch is often the most substantial meal of the day.

Beans, corn, rice, fruits and various types of meat are some of the staple ingredients. The local cuisine is the result of blended cultures throughout the years with indigenous and European influences mixed with Afro-Caribbean flavors.

Due to very diverse differences across the country’s regions, the cuisine is also highly regional. Colombian dishes can, therefore, include various types of ingredients depending on the region. 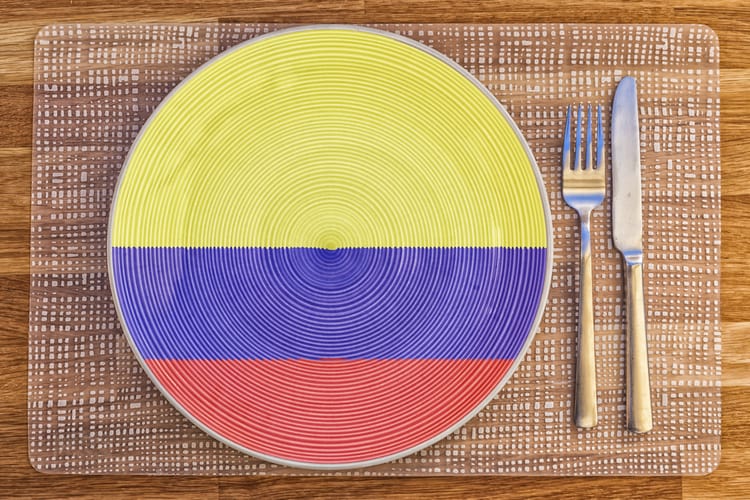 What do Colombians eat for breakfast?

There is a different variety of foods available when it comes to feasting on breakfast and the most popular dishes include tortilla paisa, arepas de huevo, Calentado, and Huevos Pericos.

What is Colombian food famous for?

Colombian cuisine is known for its diverse flavors and traditional dishes across various regions.

What is the national dish of Colombia?

The national dish of Colombia is Bandeja Paisa. This traditional dish was introduced as an energy booster meal to the peasant workers. Now, it is considered part of the staple diet.

Is Colombian food healthy or unhealthy?

Most of the food from Colombia is quite healthy and this is because they use fresh ingredients that are organic without additives.

What is the most important meal of the day in Colombia?

What is your favorite food from Colombia? Leave a comment!