Food from Pakistan is well-known around the world for its savory and flavourful taste. The locals go for quality as much as the quantity and the love for food is ingrained in the culture.

Chicken Karahi is one of the most popular dishes in Pakistan. The word Karahi literally means the wok, the container in which the dish is prepared and traditionally served right off the stove.

The meat is cooked with vegetables on high heat and chicken is the most popular meat used. However, other kinds of meat can include goat, sheep, beef and rarely even turkey or camel.

Karahi variants include simple recipes like meat cooked with only tomatoes and chilies in the northern region. Onions, garlic, ginger, and other seasonal vegetables are commonly added as you travel further south.

The spice content in the Karahi can be varied whereas the tenderness of the meat can go from soft to well done to meet personal preference. It’s an iconic dish that you can find all across the country and it’s relatively quick to prepare as well. 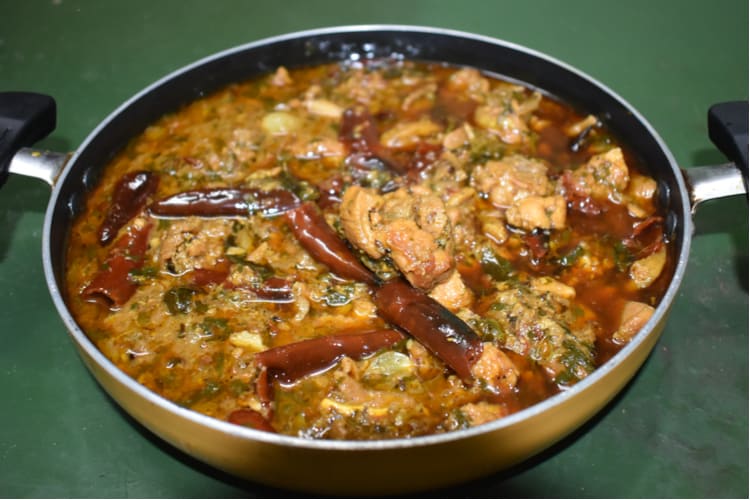 Pulao is one of the most popular rice dishes from Pakistan and often wrestles with the Biryani for the top rice dish. It is prepared with rice fried in oil where the chef continuously adds dry spices during the cooking.

Large chunks of meat slowly add a distinctive flavor to the whole pot. Slow cooking is absolutely essential to make the most of Pulao which makes this simple dish rather difficult to master.

The wonderful aroma of Pulao is unmistakable and depending on the region, you could find yourself eating Kabuli Pulao or Yakhni Pulao among the many variations available. 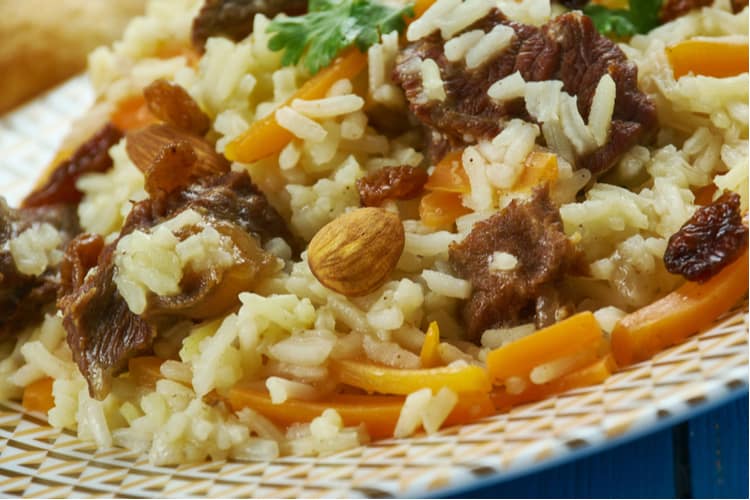 Biryani is considered the crown jewel of Pakistani food and rice dishes. A visit to Pakistan is considered incomplete if one doesn’t have Biryani. The intricate preparation has many styles and techniques but the most common one is layering pre-steamed rice into a large vessel.

Several dry spice combinations of cumin, turmeric, cardamom, and other various spices will be added before being served with a few strips of tender meat cooked separately. In some styles, the meat (chicken, mutton or beef) becomes one of the many layers that are added individually.

The layers are not stirred to prevent mixing of the ingredients so you’re basically served a cross-section of the entire pot. Biryani is often paired with mint raita (light yogurt sauce) to enhance its flavor and condition the spiciness. 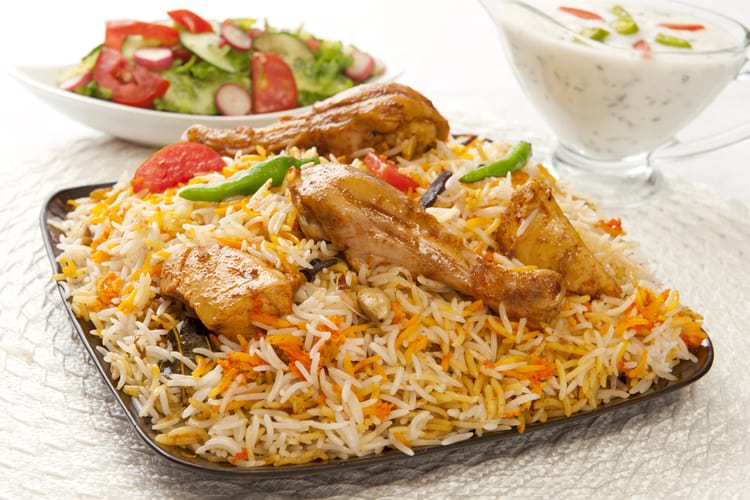 Nihari is basically a heap of dry spices fried in vegetable oil and animal fat. Once cooked to perfection, desi ghee (clarified butter) and meat are added to the stew.

The stew is then slowly cooked and stirred throughout the day to get a thick and consistent texture with tender meat. The deep red color comes from the spices and you can expect a savory food experience when eating Nihari. 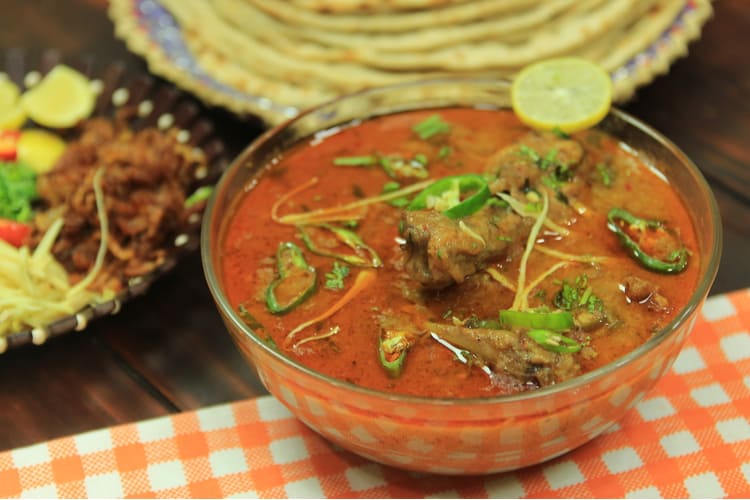 Haleem is a hearty concoction of several different kinds of lentils, barley, chickpeas, and wheat. Its origins come from the middle eastern dish called Hareesa.

Haleem is often topped off with fried onions, chilies and masala before squeezing a slice of lemon for a final varnish. You will be pleasantly surprised by the flavor-explosion in your mouth. 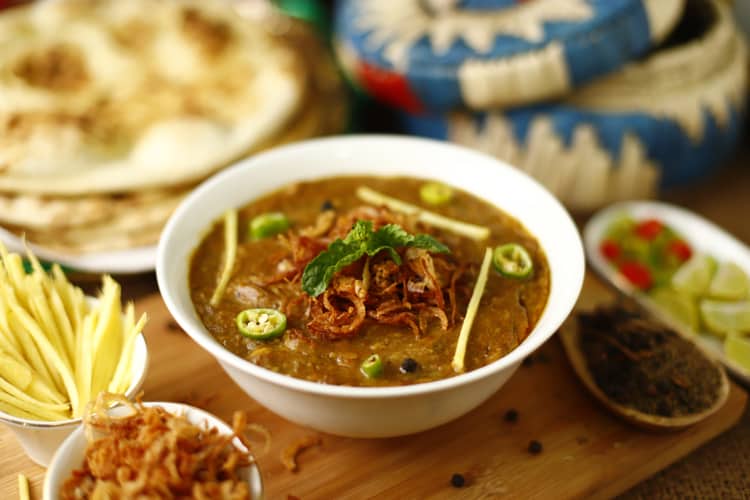 Kulfi is a dessert that is often mistaken as the home-made ice cream but it’s actually more than just regular ice cream. Aside from the obvious differences in preparation, Kulfi is basically made of milk, which is slowly cooked and dried to form a thick paste.

Brown sugar or Gur is often added to sweeten the mixture before it cools down and gets poured into the mold. Due to its dense nature, Kulfi doesn’t melt quickly and can be enjoyed for longer periods. 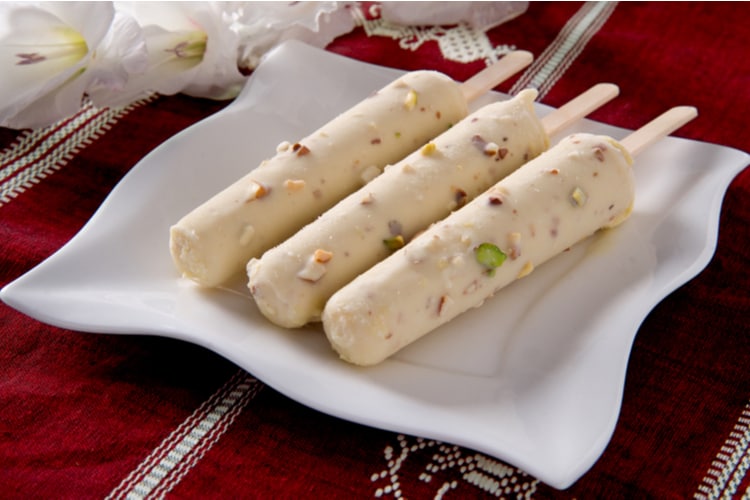 Daal Chawal (lentils and rice) is a local favorite and one of the popular peasant dishes within Pakistani cuisine. It’s a simple dish that comes with a mixture of flavors from spices, curry, ginger, garlic, coriander, paprika, and cinnamon.

The main ingredient is a lentil that can either be red, green or brown. When ready, the Daal is poured on top of plain white boiled rice. It’s a great dish to eat for lunch. 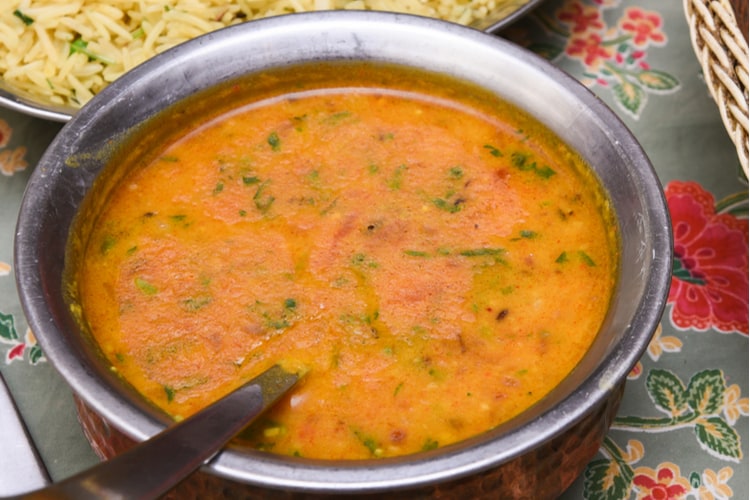 Korma is basically a thick curry achieved through a blend of spices resulting in its distinctive dark red color. However, the second main ingredient for Korma is actually the meat (chicken, mutton, beef) which is slowly cooked and infused with spices.

This results in a hearty and rich curry that will leave you licking your fingers at the end of your meal. 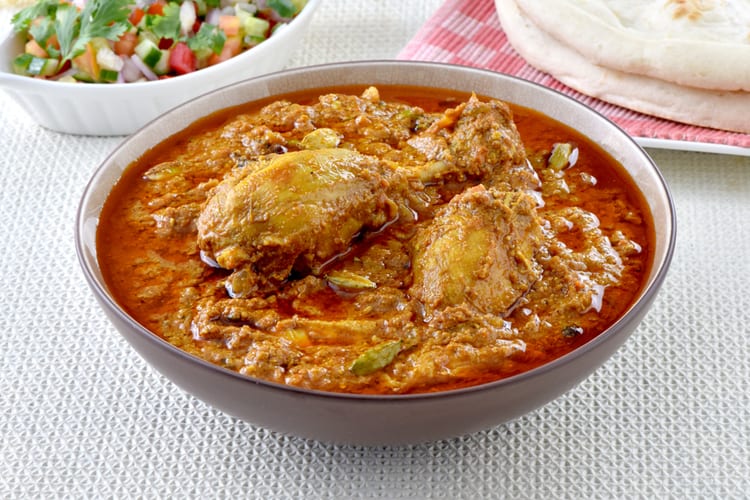 Tikka is another extremely popular item from Pakistan. The meat is marinated from a couple of hours to up to a day or two to fully let the flavors soak into the meat.

The piece of meat is then barbecued traditionally on coal to give it a smoky finish before being served hot off the barbecue. Tikka is often varnished with a squeeze of lemon and with a salad as a side dish to make it a complete meal. 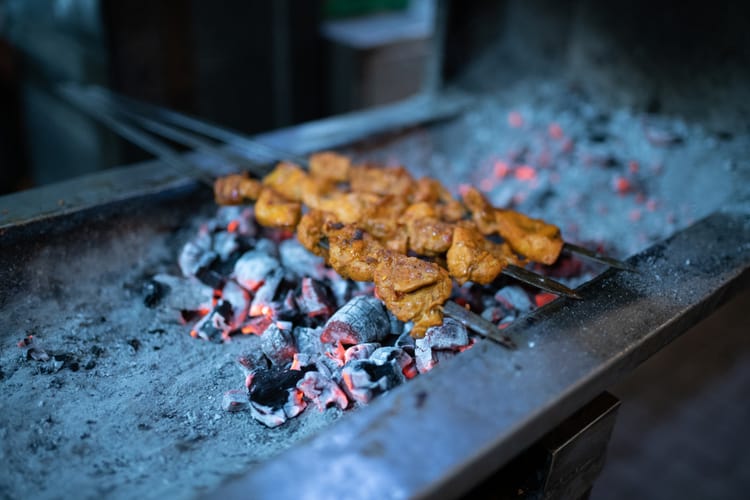 Another iconic barbecue delight from Pakistan is the Seekh Kebab. Kebabs of any kind in Pakistan are usually made using minced meat. Seekh means the rod on which the marinated minced meat is stuck and then barbecued traditionally over a bed of coals. 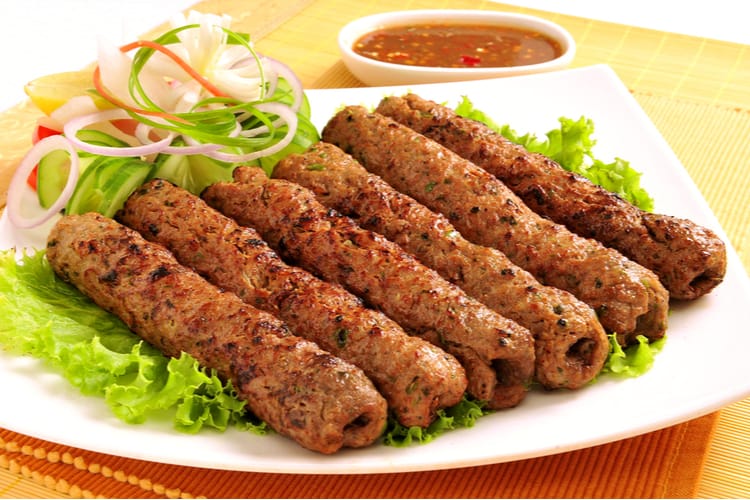 Paaye is another slow-cooking delight from Pakistani cuisine. Some basic ingredients like onion, curry, and spices are allowed to cook for several hours and often overnight. 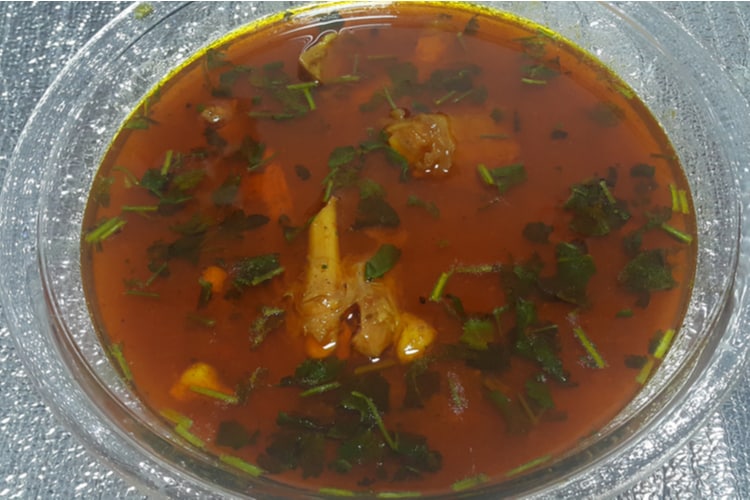 A north-western delight from the Pashtun region of KPK, the Chapli Kebab is a flat style kebab that’s deep-fried in oil or pure animal fat before being served hot.

The minced meat is actually mixed with vegetables, spices and even flour to make this a wholesome meal. Despite the incredible combination and hearty nature, Chapli Kebab is often enjoyed as a side dish to the main course. 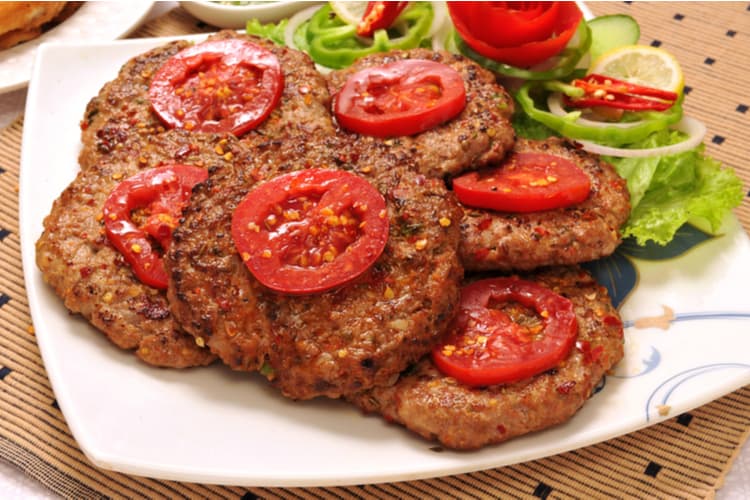 Sajji is a very simple dish where a whole chicken or lamb is skewed and lightly seasoned. The skewer is then held aloft a bed of charcoal which slowly sears and cooks the meat. Sajji very tender and it’s often served with mint raita. 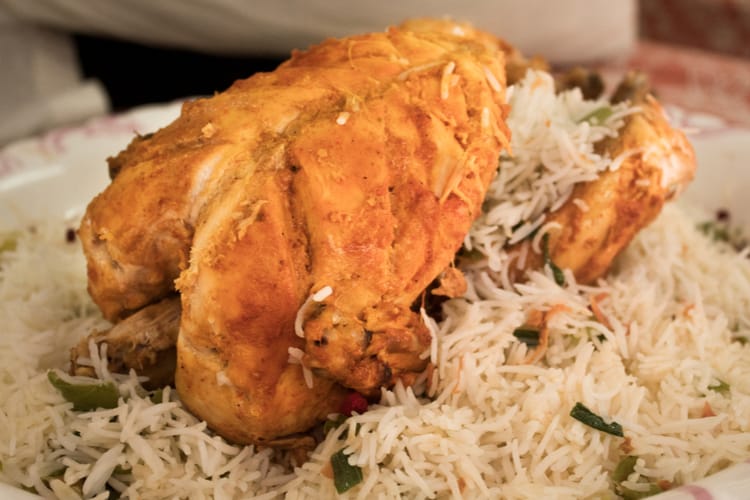 Chaat is a classic snack that is not considered a meal but can still be very filling at any time of the day. The idea of chaat is a delicious, cost-effective and quick snack that can be eaten standing or on the go.

As one of the most popular street foods in Pakistan, it’s a dish of incredible variety. It often comprises a bed of chickpeas, which get a topping of sour, spicy, or cool sauces on top.

However, the name doesn’t come from any of its ingredients but the sound that the chef makes – while mixing and cooking all the ingredients on a gigantic iron plate using two sharp steel/iron cutters.

Taka-tak (or kata-kat) is usually made with goat kidneys, hearts, and testicles. The meat is mixed with generous portions of chilies, onions, tomatoes, and other seasonal vegetables. 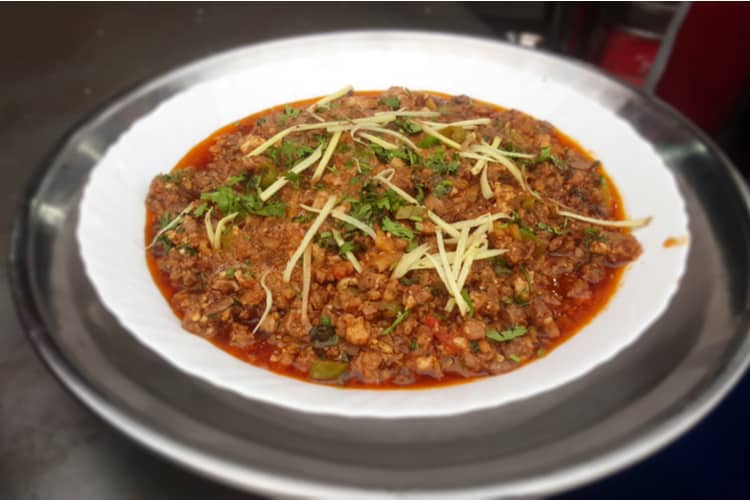 More About Food in Pakistan

Food in Pakistan is very diverse and often depends on the region where you are located. Each region has its own unique traditions and recipes of Pakistani dishes.

Pakistani food is very hearty and flavorful with a rich blend of spices resulting in a totally new dish every time you try a different combination. Some common ingredients are tomatoes, onions, chilies, garlic, ginger and many different kinds of meat.

The rich sauces and chutneys are an essential part of the local cuisine, and they are prepared to complement each meal perfectly. Pakistani dishes are generally easy to make but often very difficult to truly master. 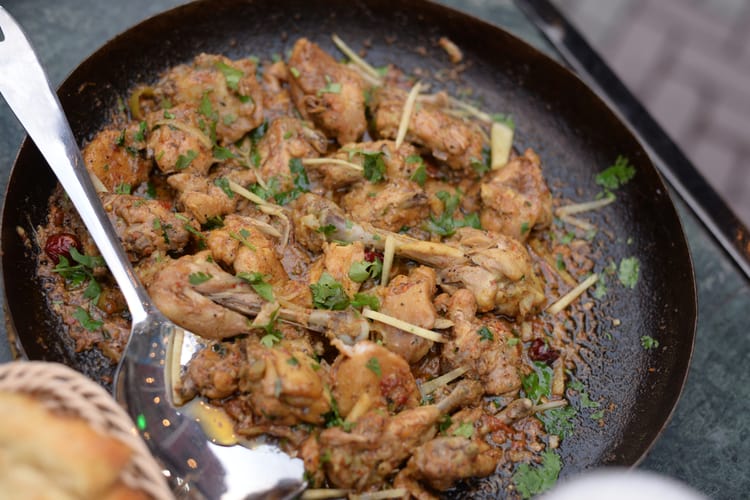 What do Pakistanis eat for breakfast?

The regional variation starts right at the most important meal of the day. Halwa Puri, Naan Chana, and Anda Paratha are some of the most popular breakfast foods in Pakistan.

Nihari is also widely popular. Pair these with Doodh Patti or Lassi to drink and you’ve got yourself a savory Pakistani breakfast.

Why is Pakistan famous for food?

Pakistani food is counted as one of the most flavorful and savory cuisines in the world. Locals take great pride in cooking and many dishes are based on lifelong recipes cooked to perfection, or even recipes that have been handed down for generations.

What are some of the famous beverages from Pakistan?

Chai, or more specifically Doodh Patti (milk tea), is the quintessential Pakistani beverage. It is consumed up to several times a day and considered a breakfast essential. The tea can be paired with virtually any dish in Pakistan.

Lassi is another local favorite prepared with yogurt and milk. Lassi can be served salty or sweet with many modern variations such as mint, mango, strawberry, and other local fruits.

What is the biggest meal of the day in Pakistan?

For most people in Pakistan, dinner is the biggest meal of the day. This is the time of the day when the entire family sits down and eats together.

Most traditional dishes from Pakistan are cooked with natural ingredients and make up a well-balanced diet. There’s no excessive use of salt or unhealthy fats, so in general, Pakistani food should be considered healthy. 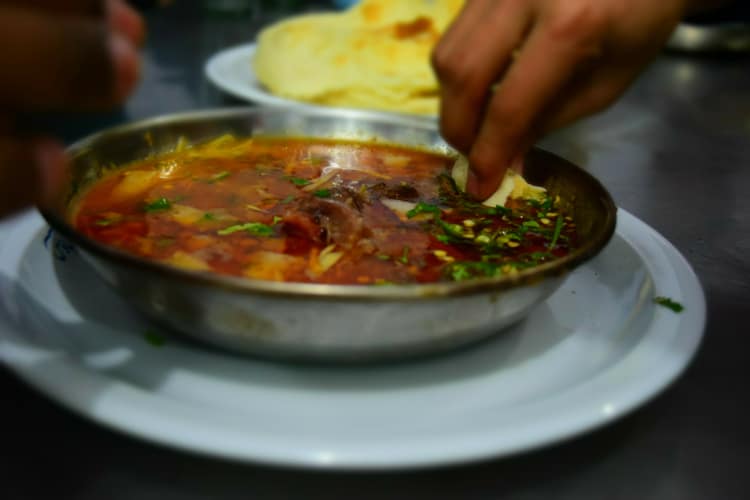 What is your favorite food from Pakistan? Leave a comment below!